Bought a Replacement Camera: Sony A6000

Last month, in a sad demonstration of how careless I can be, I managed to leave my Sony A5000 Camera on a park bench in Minnesota: LINK

That camera was actually a replacement for the Sony A5000 which went up in the fire that caused the loss of Fiona, my '99 Ural Patrol Sidecar Rig with the R80 BMW engine: LINK back in November of 2020.

I'd debated just sticking with the camera that comes with my smartphone, a Pixel 4a.  It shoots very nice photos for the most part, does great with panorama situations and for most of the pictures I shoot, would have been fine.

It does, however, not do a great job in low lighting, sunset shots are just "OK", and for long distance objects, it doesn't work.

I decided today, after some soul-searching, to buy a used Sony A6000 camera from a private seller here in the Metro Denver area.  I like the Sony interface, their APS-C sensor and I still had a recently purchased 55-210mm telephoto lens that would work with the A6000. 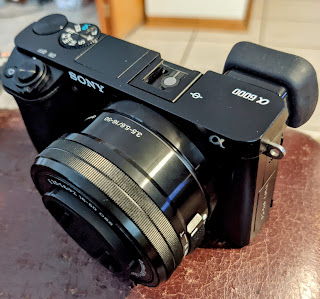 What with the upcoming trip to Hawaii, the US Sidecar Association's National Rally in Hotchkiss, CO in a few days, I figured the time was right.

The camera is in great shape as you can see in the above pic.  Its shutter count was 461 when I bought it, so its barely used.  It's got some improvements over the A5000 I lost:

It comes with a standalone battery charger with two extra batteries and a small camera case as well.
No real learning curve with using this camera as the UI is 90% the same as the one on the A5000.
Now if only I can manage to hold onto this camera and keep it working.....
For shots which require more powerful zoom capabilities, I have the Nikon Coolpix S9900 that CCjon of Riding The Horizon generously gave to me.  It's got a 30X Optical zoom, and its digital option is actually better IMHO than the one on the Sony HX-80 I previously replaced the first A5000 with; and which recently gave up the ghost.  (I'm apparently hard on cameras)
On the home front, Martha continues to recuperate from Covid-19 with only mild symptoms.  Patrick, aka Thing One, has reported an impacted molar and so its off to the dentist I go with him tomorrow morning hopefully.  Finally, I got my second Shingles shot today at the VA clinic, my upper arm is sore and stiff.
I'm thinking all this will probably delay my departure for the sidecar rally.
We'll see how tomorrow goes I guess.
Posted by redlegsrides at 8:30 PM

Wow! 24megapixel sensor. I thought that smaller sensor elements made for poorer low light performance. But this is from years ago. I don’t read much on cameras anymore.

Have fun at the sidecar rally! Are you riding there or trailering?

Great camera! When I visited Paris early this year I left my tripod outside the Louvre Museum. I was lucky to find it outside once I realized what I did.

Been there, done that, Kofla!

Nice camera. I have my a5000 from a few years ago, and looked at upgrading to the a6xx series. They were sold out everywhere, so I ended up updating the Nikon to mirror less instead. Lucky you to find an a6000 available. 🙂They’re nice cameras and compact.

Sending Martha well wishes and a quick recovery. Covid is no fun.

I could not pass up on the deal Bluekat. Cost was same as what insurance company paid out for the missing a5000.

Good luck with this one, looks and sounds like a very nice camera.

I'm going to try and protect this one better Coop, but I am hard on cameras.

Glad to hear that Martha is recovering. You mentioned a trip to Hawaii? Good for you! Bring back some nice pics with that new (to you) camera.