A Recovery Day, followed by Near Death by Chocolate

We spent the day just resting and relaxing.

Larry H. and I did some exploring of the cliff area above Shipwreck Beach while the ladies did some light shopping at a crafts display nearby. 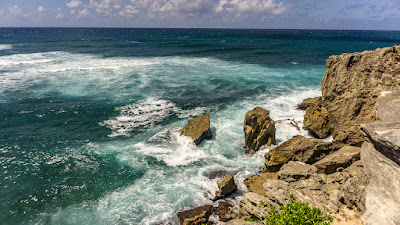 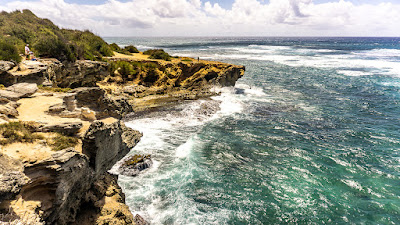 I used the day to re-center my "chi" and kind of, sort of,  succeeded.  Lunch was Hawaiian "comfort food" called Loco Moco: Basically, a bed of sticky rice, over which you usually get a burger patty covered with a fried egg.  The version we had substituted diced prime rib and sausage slices instead of burger...all served with a creamy sauce.  It was yummy. 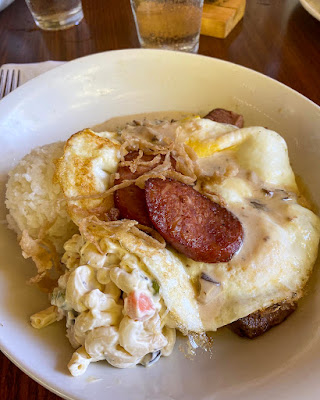 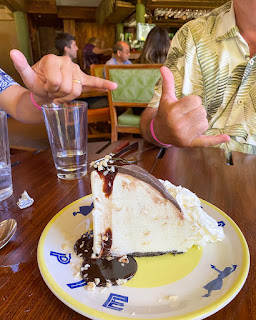 Giving the "shaka" in approval
of Hula Pie

The rest of the day we vegetated at the resort.  I did try using "sports" mode on the camera to try and capture surfers in action:

They were at most, just marginally better than the previous attempts.

To celebrate, she'd booked the Chocolate Tour at Kauai Chocolate near Kapa'a.

I just have a few things to say about it.

Speaking not only for me, we were pretty much sick of dark chocolate by the end of the overlong and slow moving lectures. It was basically one hour of good information crammed into four and sold as a three hour tour.

There's no viewing of actual chocolate production, just a few examples of cacao seed grinding appliances.  Though you did get a close look at raw Cacao seeds; even sampling their outer pulp as one of the offerings during the fruit tasting portion of the tour.  (Kind of like swishing a sweet tasting "loogee" around your mouth) 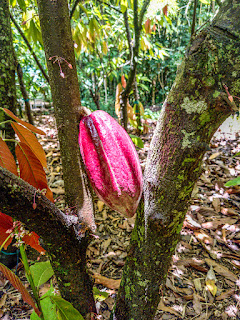 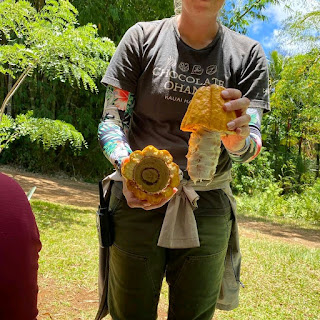 Even the ladies were fed up with the taste of the predominantly dark chocolate bits we were given to sample!  It wasn't a large amount of chocolate that we tried, but the result was uneasy stomachs and really only a vague idea of how chocolate is made. 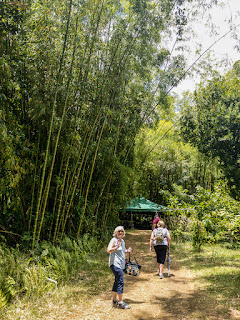 Going to, thankfully, the last station
in the tour

The tour started late, ended late and we left hurriedly.

We drove back to the resort, stopping at a McDonald's to get some food to settle our stomachs.

The rest of the afternoon was spent poolside, and we finished the day watching a pretty good movie called "The Vault"...this we can recommend!  The chocolate tour?  Not so much

Still, I believe Martha had a memorable birthday, who knew there could be such a thing as too much chocolate?!?

A couple of miscellaneous pics from days ago. 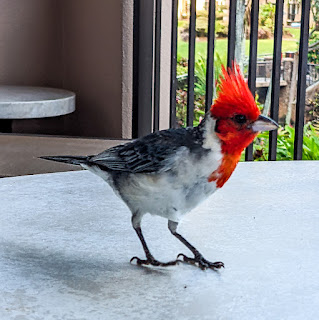 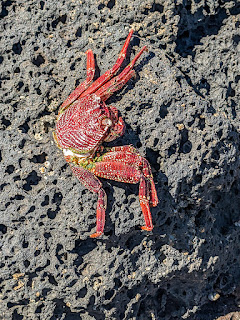 My "Chi" status?  Its pretty much shot to hell.  I'm starting to fixate on worst case scenarios for the flight back, which will be in Economy, as we couldn't get First Class on the return trip.
Posted by redlegsrides at 3:21 PM

Loco moco really is comfort food. When I stayed in UH housing, the food service offered fried spam instead of the burger patty. That was also delicious.

Too bad about the chocolate tour. It had potential…

Thanks for the correction RichardM....yes, too bad about the tour.

Note to self: skip the Chocolate tour. 😂😂😂

Yep, trust me on this one Bluekat....