An Electrical Gremlin & Bits and Bobs....

Thursday, As I was returning from another successful test drive of the Sammy's new carburetor, I saw a Jeep broken down in the middle lane of Arapahoe Road near the Saddle Rock Golf Course.

By the time I got the Sammy turned around, other drivers had stopped and helped push the Jeep over to the right lane.  I pulled over in front of it to offer assistance, putting on my Sammy's flashers as well.

I walked over, and the youngsters in the Jeep reported help already on the way.  So I turned around and noticed that the right turn signal light wasn't working on the Sammy.  Hmmm.

Figured it was a burned out bulb, so I disengaged the flashers and went home.

Took the light assembly's lens covers off, saw power going to the socket via a multi-meter so figured yeah, a burned out bulb, even though the filament looked OK.

Three new 1156 bulbs later, no joy.  Hmmm.  Much diagnostics later, along with a purchase of universal socket 1156 kit from auto parts store, it still wasn't working.

I called the Sammy guru: Mike W., he walked me through verifying ground connectivity.  It was fine.  He had me check for power upstream of the cannon socket that provides connectivity to the right lights assembly, there was power, but it would again disappear when a bulb was installed.  Weird.

Tiring of this, and quite frustrated by then, I started looking further upstream for a tap point to bypass the wiring harness' wires going to the light assembly.

As I looked, it occurred to me to check the wiring the PO had made to integrate a tow wiring assembly into the Sammy.  The Sammy you see, came ready to be towed when I bought it.  I'd not used the installed lighting system since the VRRV was set up for just a regular four pole connector instead.

Using the wire's color code, I located the diode involved and removed connections to verify it was indeed the one that would supply power to the rear right turn signal.  I put the wires back on the diode and went to check the rear turn signal for power once more; damn if it wasn't working again!

Apparently, my removing connections and putting them back together had been enough to remove corrosion/dirt and allow the diode to function?  Or something wonky in the diode?  Unsure.

Of course, I was happy at this happenstance, and put everything back together and ensured all rear lights still worked.

The next day, I removed all the diodes, but left the tow wiring leading to the front socket on the front bumper in place.  I wired up the respective cables directly to each other for hopefully more reliable electrical connections!

RichardM later explained to me about the diodes' function and a likely explanation of why I saw power via a multi-meter but not when bulb was in place.  The meter was likely reading power from elsewhere involved with the flasher lights. 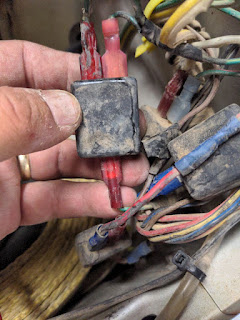 diode in question
Let's see some miscellany as we prepare for a trip:
Martha has decided that Stewie, her scooter, is to go permanently to its de facto home over the last few years.  The scooter has been ridden/exercised and taken care of by Dale B., one of our neighborhood friends who is slowly amassing a herd of scooters.
Friday, Dale took formal possession and Stewart is now living at his de jure home. 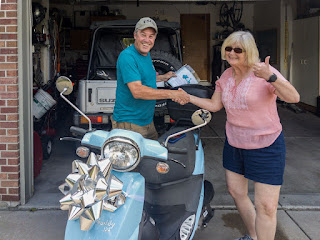 As I was at the local ACE hardware store to pick up some lag screws to fix the sagging gate to the backyard; I spotted a display of straw sun hats.
I tried this one on and it fit me quite comfortably yet securely, even comes with a chin strap for those windy days.  It'll be my Aloha State hat.... 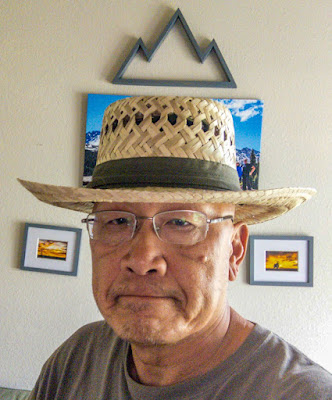 Last but not least, I'd found during the extensive driving I'd done this week after replacing the carburetor that people just weren't paying attention to this sign and almost hitting me as the Sammy tried to accelerate from a standing stop. 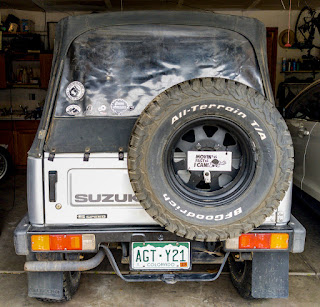 So, I'm trying something more direct in terms of a sign and added a third brake light as well: 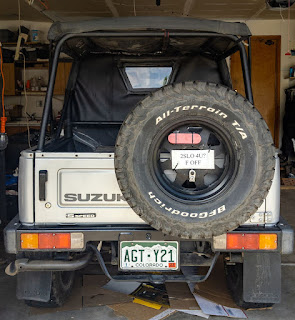 The Sammy's Toyota 3K Carburetor continues to function flawlessly, the engine runs at low RPMs when cold but once she warms up, all is well.
Posted by redlegsrides at 4:05 PM

Have a nice trip!

Thank you RichardM....hope the RV engine evaluation results in less than expected costs!

Good catch on the right flasher.

With that hat you might be mistakes for a Hawaiian native....better practice some polynesian words, like "Tips are appreciated".

You both, enjoy your time in paradise.

Thanks CCjon, even a blind squirrel finds a nut once in a while....

Most likely not, Coop, but it should save wear and tear on my left hand's middle finger.

The straw hat becomes you. Have a wonderful trip!

I have to disagree with Sonja... That hat isn't you. I'm not sure what headgear other than a helmet I could warm up to on you.

Man, your patience with electrical stuff surpasses my patience for anything....

I have found Steve, that people get a little nervous when I walk into a store in the helmet, not sure why. It also gets a little warm on the beach! ;)