The three of us went on a motorcycle ride to the Buenos Aires National Wildlife Refuge (BANWR).  Lori was riding their TW200, Chris was on my TW200, Yagi and I rode Scarlett, my 2014 Ural Patrol.

First we rode on highway 286 a few miles to the BANWR Visitor Center.  They've done a lot of improvements since the first time I was there.  Worth a stop if you're visiting the area.

We got photographed by the visitor center volunteer docent, apparently we'll be appearing on a visitors board within the center. 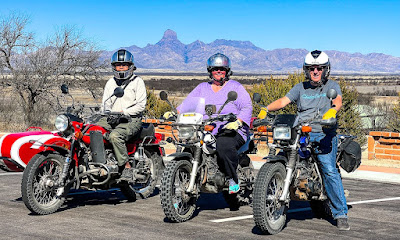 We rode over to Aguirre Lake, only to find it empty as usual.  One of these times, I'll be camping near the BANWR at the right times of the year when water is evident.  Along the way we stopped for a pic at the corral that represents what's left of the Buenos Aires Ranch founded by Mr. Aguirre. 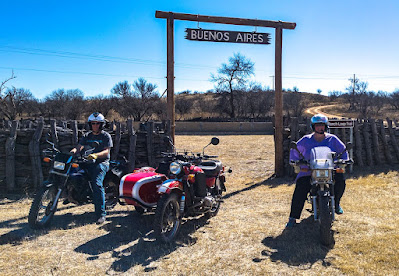 Next, we took Trail #525 towards Arriva Road, and in spite of a couple of missed turns, made it to the junction of Trail 524 which eventually dumped us back on Highway 286.  From there it was less than a mile to Arrivaca road.
I showed Chris and Lori some of the designated campsites that I've stayed at before along with the other ones in the area.  We eventually found the road that took us back to Highway 286, near our entrance to the area where we're boondocking.
We saw, right at the entrance, a pickup truck with what looked like a flat tire.  We crossed the highway and stopped to offer assistance to Jose.  He was an older gentleman who seemed happy for the help. 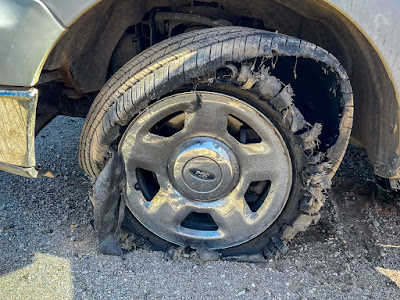 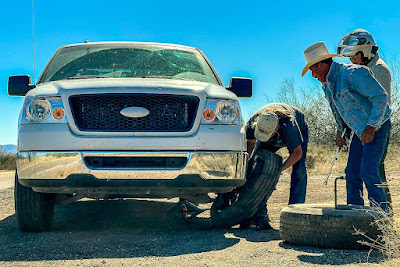 Chris and Jose did most of the work, I did provide the use of the small bottle jack I carry in the trunk of the Ural.  It came in handy when the scissor jack Jose had with him got jammed up when we tried to use it.
The bottle jack was a tad short though when it came time to put the spare tire on the truck.  Luckily, Chris Z. had figured out what was jamming the scissor jack and all was well after that.
Job done, Jose thanked us with cold Coca-Colas from Mexico.  He went off to the north to get some more air put into his spare tire and we motored back to our campsite.
After a brief rest, I set about installing some insulation strips on the VRRV's door, in order to try and keep out the drafts/cold.  The installation went fine after Chris Z. corrected me about where I was putting the new stuff. 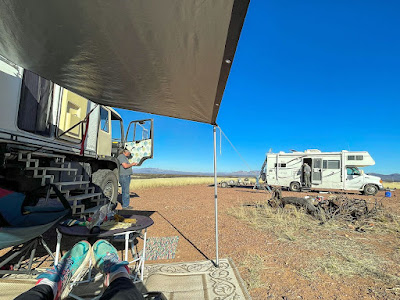 Lori Z. was "supervising" our efforts while Chris Z.
and I worked on our respective doors.
However, when I went to test the locking of the door, ran into trouble engaging the dead bolt!  Much adjustment later, some cutting with a drill bit, Chris suggested using a tool new to me: 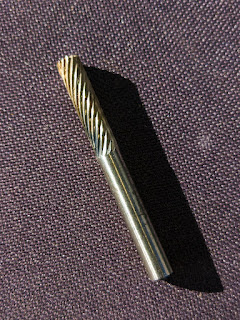 I believe its called a Burr Grinder tool, and is employed like a big Dremel grinding bit.  I tried using my power screwdriver at first but ended up using Chris Z.'s Dewalt Cordless Drill to really grind away enough metal in the hole used by the deadbolt on the door latch!
Yep, I'll be ordering a set of these burr grinders soon.
The new insulation strip was causing the deadbolt to hit the outer edge of the latch's deadbolt hole you see.  The above tool allowed me to grind away enough to permit engagement by the deadbolt.  Now all is well, and hopefully the new insulation will help keep the cold out!
Dinner was in the VRRV and afterwards we chatted while we waited for the arrival of the Moonrise.  It was almost a full moon, at 99.6%, and we were looking to experience the "Moon Illusion".  This is where the brain thinks the moon looks larger when closer to the horizon. 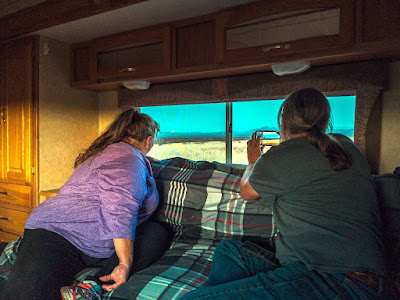 The Z's see the Moon start to appear 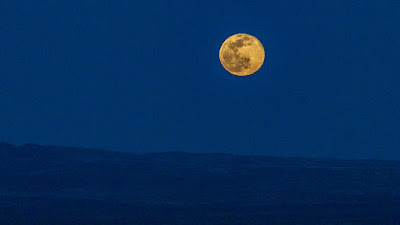 Picture shot with telephoto lens and
heavily post-processed.
A very good day overall!  Nice and warm, somewhat windy but not bad.  We had us a nice ride, Lori did great on the trails with the TW200 and I crossed one more item off the VRRV chore list.
Posted by redlegsrides at 8:00 AM No comments:

Warm Days Near the BANWR

A very warm day today, under mostly clear skies.  Friday had been warm too but cloudy at times.  Temperatures reached the low 70s!  This is the Arizona Winter conditions is what I had been hoping for!

The clear skies that lead to warm sunshine days caused a cloudless sunrise:

In the morning, I went for a short ride on Yagi, my TW200. I wanted to warm up the engine oil in order to change it after the ride.

A view of our rigs from nearby ridge 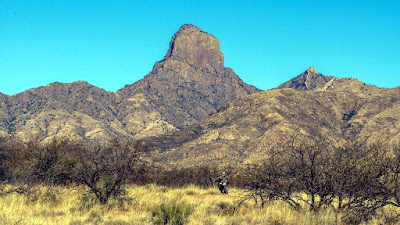 Baboquivari in the mid-morning light
The oil change for Yagi went well, I also swapped out the filter and she'll be good for another 3000 miles.

I then decided to reinforce the steel plates I'd installed long ago to help secure the mounting points for the trailer's tongue assembly.

I had the leftover bits of 1/8" thick angle iron and I used one to attach it to the existing plates on the left side of the tongue assembly.  A bit of a PITA due to the angles involved and the fact I was working under the trailer. 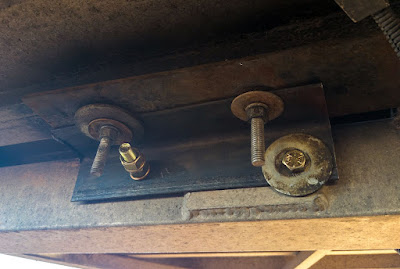 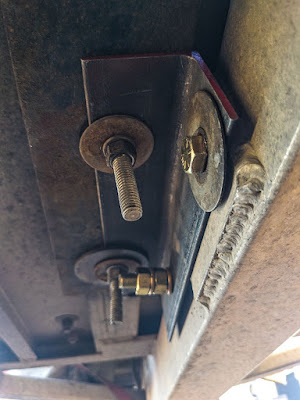 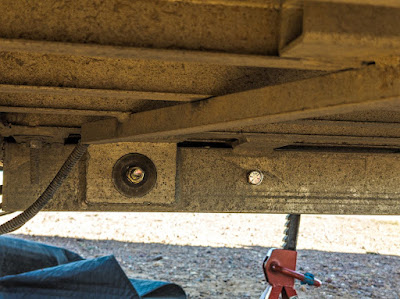 Yup, as with most of my handiwork, not pretty but it should work fine.  I might get ambitious and get suitable washers to "spread the load" but for now....

Later in the afternoon, I was resting and chatting with the Z's over at their rig, enjoying the warm weather and sunshine.  Lori broke out her drone and decided to some more footage of the area.As Lori flew the drone about, I stood to catch this image of the steadily rising Moon: 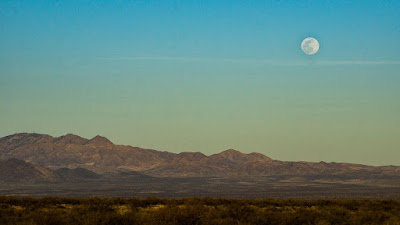 After the sunset, which proved to be "meh", I sat inside the Z's rig to enjoy a roast cooked by Chris Z. in their new Ninja Foodie Air Fryer/Oven appliance: It proved very tasty but not fork-cuttable.  We believe it wasn't the cooking but the type of cut: Eye of Round, which we googled and found to be the hind quarters of the cow....very muscled area.

Lori, Chris and I look forward to more experimentation and learning of the Ninja Foodie appliance!

Posted by redlegsrides at 8:59 AM 5 comments:

Boondocking with BlazeOurWay near the Buenos Aires NWR, AZ

Today, Umarang the VRRV got herself a set of new tires in Tucson.  My appointment was for 9AM at Discount Tires and I was out of there by 10:10 I believe.  Everthing went very smooth but next time I must remember to tell them to not put caps on the air valves.  I'd removed the TPMS sensors beforehand you see, and had some issues removing the air caps from the inner dually tires.  Oh well, live and learn. 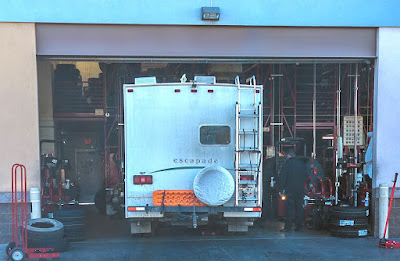 Prior to Discount Tires, I'd done a pickup of stuff I'd ordered through Amazon.  Sadly, two items will have to be returned as they were the wrong thing.
After getting her new tires, I drove Uma over to the local KOA to dump tanks, taken on water and fill up with propane.
All that done, I headed out of town towards the Buenos Aires National Wildlife Refuge about 60 miles southwest of Tucson.  The weather was gorgeous, warm and sunny!
I set up camp under ideal conditions and even did an additional reinforcement repair to the left fender on the trailer.  (The rear of its mount had once again separated)  It should be good to go now: 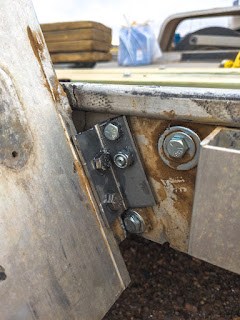 Here's a look at one of Uma's new tires: 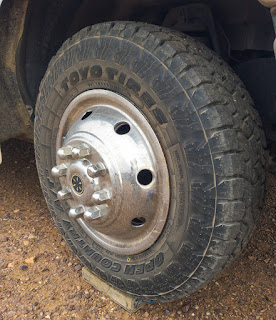 I scored the preferred campsite, with a good view of Baboquivari Peak: 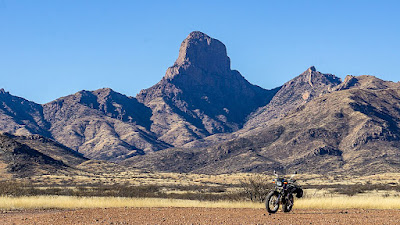 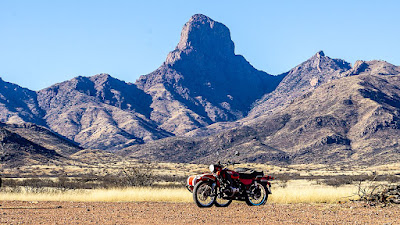 Lori and Chris Z. of BlazeOurWay, would join me as darkness fell, having had more chores to get done while in Tucson.
Friday, February 3
Today's sunrise was pretty good: 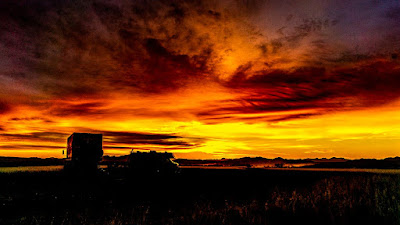 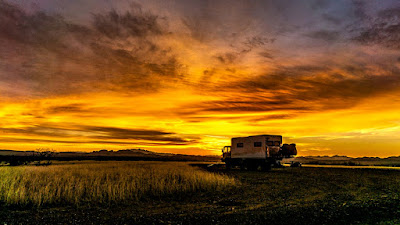 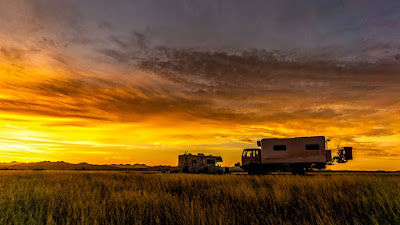 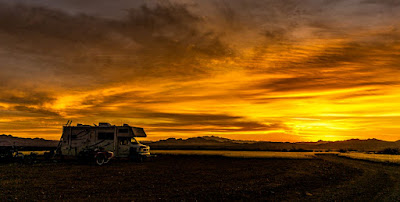 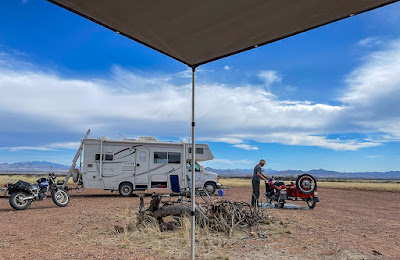 photo courtesy of Lori Z.
That done, I also reinstalled the right side light on the front cargo rack.  I'd broken it while unloading Yagi from the rack yesterday.  A little JB Weld and all is back together.  I really must remember to use the ramp instead of just rolling Yagi off the rack!
The Z's on the other hand, relaxed after a busy couple of days in Tucson and a restless night at Snyder Hill BLM.   (loud music playing ass wipes nearby apparently, though I slept through it). 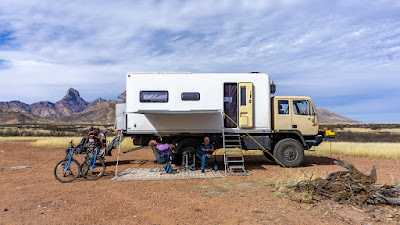 Around 4PM, I thought I'd take a ride on Yagi, my TW200, to catch Baboquivari Views.  Clouds moved in though, and this is the best I could do: 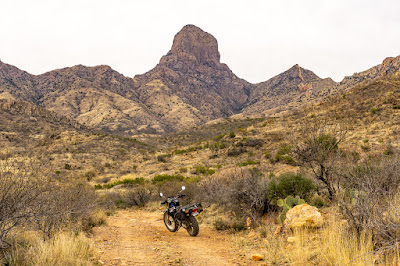 Tomorrow is supposed to be sunnier so perhaps I'll return to this spot.
While I was out riding, Lori Z. got her drone out and did some filming around the campsite:
Dinner was with the Z's and it was delicious!  I normally don't eat fish but Chris Z. cooked up some tasty Blackened Tilapia, and the Z's used their new rice cooker to provide great rice and their new Ninja Foodie Toaster/Air Fryer to prep some veggies.  It was all great! 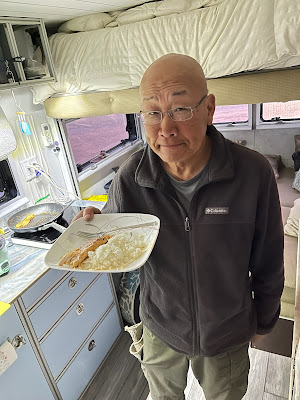 I went back for seconds!
Update: I had forgotten to check for a military/veterans discount at Discount Tires. I called them, at the request I emailed them a photo of my veterans ID, and they honored the 5% discount!  It came to $11 a tire, so a refund of $66 is pleasing.
Posted by redlegsrides at 8:18 PM 2 comments:

I left before Chris and Lori did but we all ended up about an hour away in the city of Tucson.

While they set about their own list of chores, I got mine done as well.  Laundry, hardware store, UPS store and then finding an "ok for one night" spot at the Snyder Hill BLM to the SW of Tucson.

I picked a spot outside of the main boondocking area that surrounds Snyder Hill.  It had less rigs in it, with only a Schoolie Rig within line of sight of me.

After I got mostly set up, I wandered up Snyder Hill and got some shots of the area. 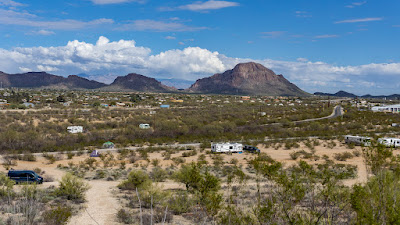 Can you spot Uma? 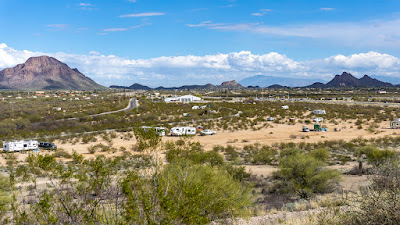 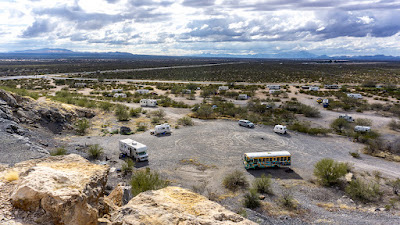 Chris and Lori joined up with me around 4PM I think.  Dinner was a PB&J sandwich made by Chris.  We were all still pretty full from our respective fast food lunching.
New tires for Uma, the VRRV, tomorrow morning.  Then a stop at an Amazon Locker to pick up stuff I've ordered and then I'll head SW to the Buenos Aires National Wildlife Reserve.
Chris and Lori still have a couple of chores/stops to make in Tucson and will rejoin with me later on tomorrow or Friday.
Posted by redlegsrides at 7:12 PM 4 comments: