Trying out Yagi on Rocky Trails

Yagi, Japanese for Goat....I named the 2006 Yamaha TW200 thus in the hopes that she'd be as surefooted as a Mountain Goat on the trails I like to explore.

Bottom line: She sure is!

Drove Umarang, the URRV to the BLM area called Penrose Commons, near Penrose, CO on Sunday March 24.  I parked it at the main parking area which was too full of weekenders for my liking.

I proved the advantage of the Pitbull Trailer Restraint System I'd installed previously and Yagi came off the trailer, easy peasy.  I rode her to recon further up the main road and found a nice and more remote campsite less than a mile away.

Returning to Umarang, it was an easy matter to hook Yagi back onto the restraint system and off we went to set up at the more remote campsite away from the crowds.

Even before setting up camp, I took Yagi and went "exploring" down a nearby rocky trail.  I still had 18 psi in the tires, which is street mode per the manual, and she did just fine on the rock strewn trail.

Turns out, I rode through a rather bumpy, rocky and narrow trail which was rated as an "Extreme 4WD" trail according to the sign I found when I came out of it. 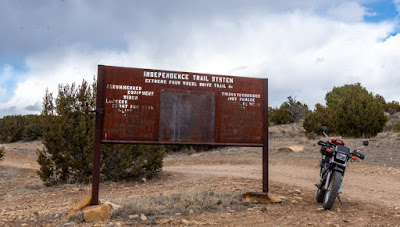 I'd spotted the nearby reservoir while riding on the Independence Trail and so pointed Yagi's nose towards it. 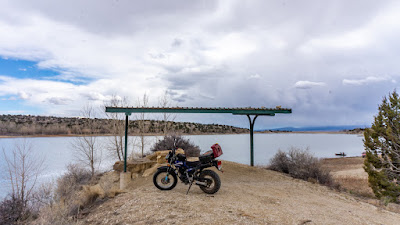 I wandered up and down the shoreline, marveling at how easily Yagi floated over dips and small mounds, rocks were no issue and she was easy to steer in the rough stuff.

Got back to the campsite, set up things for the night and enjoyed a nice sunset: 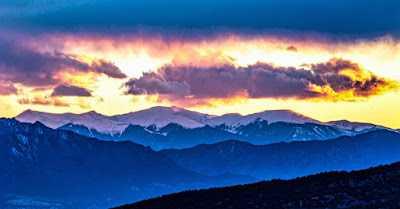 Monday was riding around the BLM area's trails, seeing what Yagi could do in spite of my lack of training or skills.

Dawn revealed a cloud layer coating the valley where
Florence, CO is located. 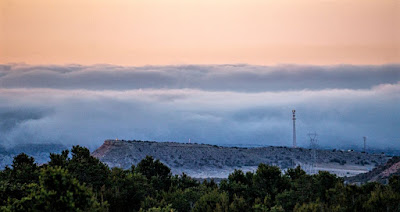 Reminded me of a ship at sea, riding in the fog....

Being a dark-colored motorcycle, Yagi is difficult to photograph at times, but she does silhouette very well.

After wandering about the BLM trails (not very scenic really, lots of sage brush and pine trees bordering the narrow rocky trails, open spaces with bushes and more sage brush plus cacti...)  I headed into the nearby Hollow Brush Reservoir SWA (State Wildlife Area). 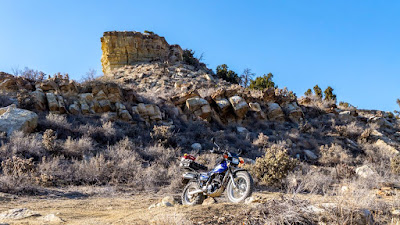 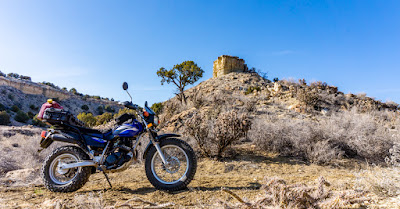 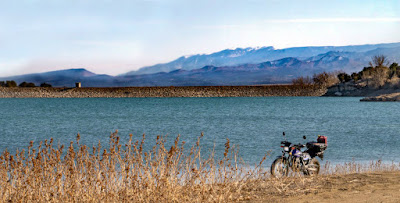 Returned back to Penrose BLM, ate dinner and then headed to the main RV parking area for sunset pictures. 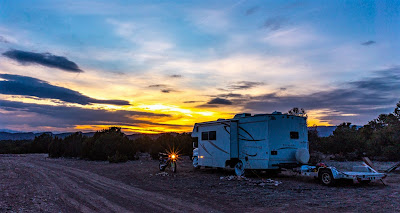 Tuesday, no riding, just working, relaxing around the RV and getting some chores done.  I did, after being reminded by RichardM, finally install the battery monitor and shunt to more accurately monitor the house battery status. 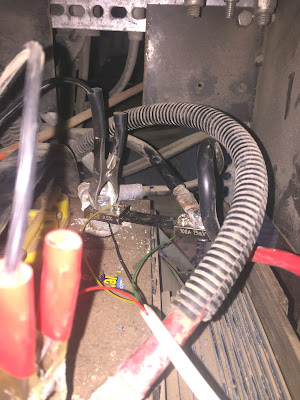 The shunt is connected to the house battery's negative terminal
Phone wire used to connect to the monitor.

The data available to me:

Rode Yagi down to Cañon City under bright sunny skies.  Skyline Drive was of course the first stop: 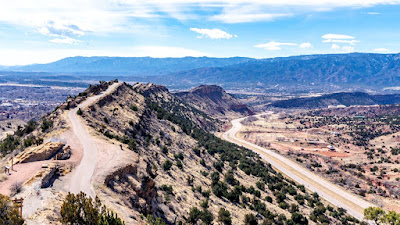 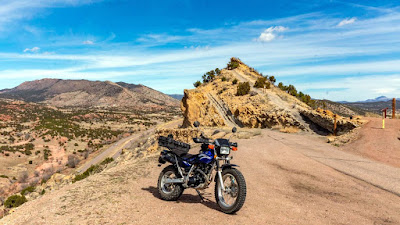 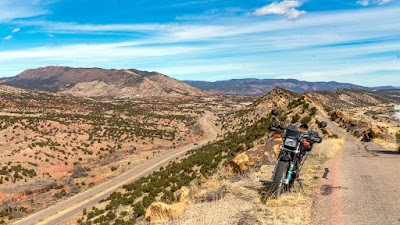 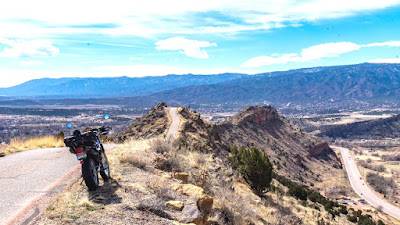 After Skyline Drive, it was some dirt riding along Temple Canyon Road, rode about the Temple Canyon Park enjoying Yagi's ability to deal with the sometimes rough terrain.

Back on the BLM land between the park and the city, I checked out narrow hillside trails, proving to myself that Yagi could make short work of them even though I did take them at slow speed. 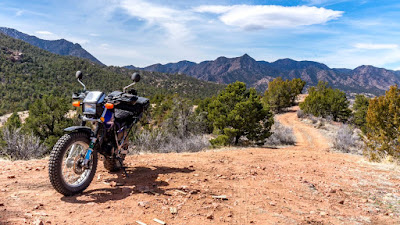 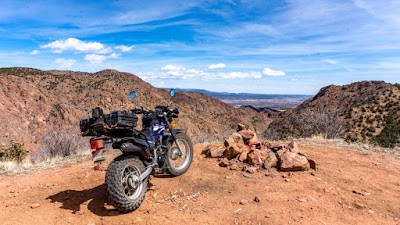 A brief detour to check out the south side of Brush Hollow Reservoir and to take attend a work meeting by phone: 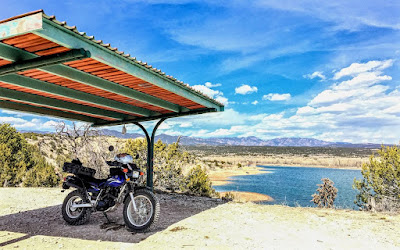 Returning to Penrose BLM, I checked out part of the Independence Trail System.  As you can see, the first step is a doozie in this section!  There were even steel anchors provided for Jeepers to winch their rigs down.  Nope, not for me. 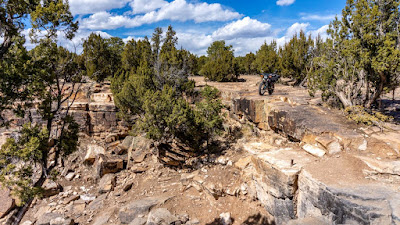 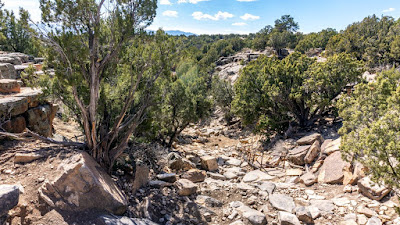 Stayed up till past midnight on a work crisis so didn't get much time to catch the sunset, I actually missed the good stuff but this one didn't turn out so bad: 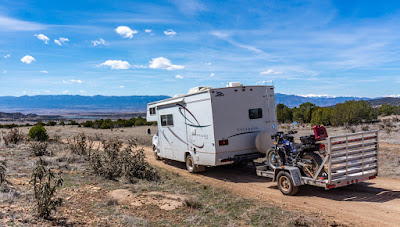 So, a good Glamping trip, short but sweet.  The Pitbull Trailer Restraint System is working out great.  I've got a better way to monitor the house battery, but best of all Yagi proves to be quite capable offroad!

I only dropped her once, Thursday morning as I did one of the trails again.  Managed to miss the line and almost went off the trail.  Stalled the motorcycle and down we went on its right side.

My right ankle was slightly pinned under the cargo rack but my ATV boots protected it.  Not so fortunate was the exhaust pipe burning through the material on the inside of my left pant leg!

Luckily, I was able to kill the engine, and move off the motorcycle before the burn got bad.  A little gas leaked from the spare gas can at the rear of the cargo rack but otherwise no damages except to my pride.

I have to remember to take a pic next time.
\
Picked up Yagi with no issues, got my breathing under control again, and kept riding back towards the RV.  All good!
Posted by redlegsrides at 7:57 PM 5 comments:

In order to transport Yagi, my 2006 Yamaha TW200 Dual Sport, I had either the option of using straps as most riders do.

Even spent a day figuring out how to do it safely and by myself.  It does a bit of time and if you aren't careful you can compress the suspension too much and blow fork seals.

Then, having seen the Pitbull Trailer Restraint system in use by friends of our in their Sprinter Van; used to secure their two Honda motorcycles with minimum fuss, I went in that direction.

More pricey than straps of course but it sure appears to make things easier to load when one is by oneself; loading and unloading the TW200 on/off the trailer!

Check out this video on how the system works:

Thursday afternoon, a neighborhood friend: Dale B., came over to help me install the restraint system.  It's much easier with two people, one to hold the motorcycle up while the other does all the drilling of holes, securing bolts and such. 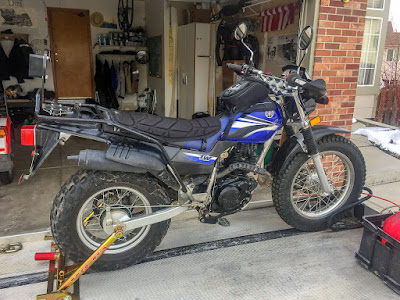 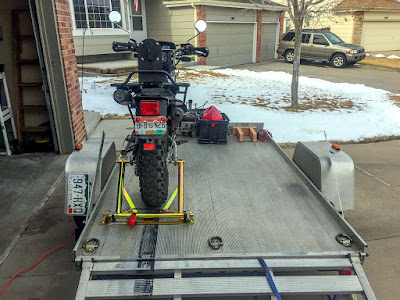 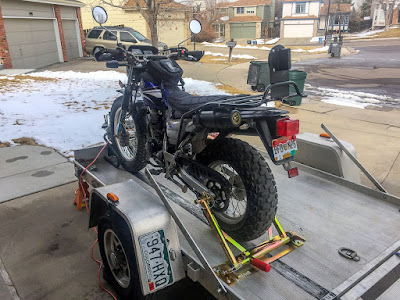 Took a couple of practice sessions but yes, I can easily load/unload Yagi onto/from the trailer.

I can either ride Yagi up under power or push her up while walking alongside.  As for unloading, I found it easier to sit on Yagi and back down the ramp.

I read Henry David Thoreau's book "Walden" a summer go and the book resonated with me in many ways. 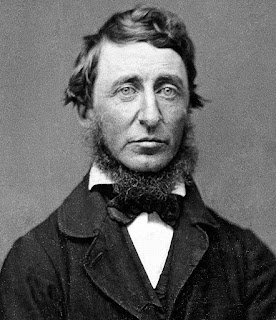 The below quotes, modified to fit my own message in Italics, hope to convey why I'm trying to throttle things down in terms of blogging and social media.

“As for Clothing, to come at once to the practical part of the question, perhaps we are led oftener by the love of novelty, and a regard for the opinions of men, in procuring it, than by a true utility.”

“As for the choice of a Ural sidecar rig, to come at once to the practical part of the question, perhaps we are led oftener by the love of novelty, and a regard for the opinions of men, in driving it, than by a true utility.”

I've ridden Ural Sidecar Rigs since late 2008, I am on my fourth Ural.  So much fun to ride, so easy to explore those trails that in my mind lead to scenic landscapes and adventure.  As to true utility though, reliability is not something I've achieved where it comes to Ural-related mechanicals.  I believe I've stayed with this brand so long due to my stubbornness, their photogenic look which is part and parcel of their novelty factor.  I guess a part of me hoped they'd become more reliable but the only thing I've really achieved is proving that saying: "Ural, making mechanics out of owners since the 1940s".

“The cost of a thing is the amount of what I will call life which is required to be exchanged for it, immediately or in the long run.”

“The cost of  blogging is the amount of what I will call life which is required to be exchanged for it, immediately or in the long run.”

My recent Southwester Sojourn made me finally realize that I'm riding and shooting pictures to provide fodder for blogging posts.  I'm not riding for the joy of riding (which I did experience in my first few years of motorcycling), I ride to destinations to pose the motorcycle and yes, Urals are mostly featured as I find them very photogenic, but what is the return on investment?  Of late, I'm seeing none.

I'd tried to minimize the presence of the motorcycle, believing that making the scenery the main objective is to make better pictures.  But still, why was I doing the picture taking?  Only to have something to blog about apparently.

Men have become the tools of their tools.

This is so true.  My tools were Ural sidecars (mostly) and how they've transported me to a particular scenic location and blogging about it.  Ride, take pics, blog....repeat...over and over again.  Trouble is, with the Urals, there was significant amounts of mechanical issues, related downtime for repairs and overall mental stress.

You cannot dream yourself into a character; you must hammer and forge yourself one.

Also, so true.  I've used a metaphorical BFH (the essential Ural Owner's tool) to hammer and forge my online image.  I'm just not sure now that I want to keep doing that.

So, where does that leave me?  I don't know.

A new and different conveyance, read another possession to possess me, has joined the stable.  I look forward to seeing where Yagi, the TW200, will take me and what scenery it'll make available to me that the Urals just worked too hard to achieve, when they actually did achieve it.