By this coming Monday evening, we could possibly have up to eight inches of snow here in the Metro Denver area; starting with snow beginning to appear around 7:00 PM this evening.  :)

Otherwise it was a gloriously sunny to partly cloudy day here in Colorado and I saw a high temperature on the onboard thermometer of 74.5ºF (23ºC)!  Warm day, doesn't really presage inbound snow in my mind but we'll see.

Scarlett and I meandered over to Daniels Park, it had been a while since I'd ridden there and I had been on Brigitta that day with not a lot of recalled stops for pictures.

The park is basically a road built on a ridge, flanked on both sides by private property.  Besides a couple of picnic sites there's not much to say about it from the perspective of a motorcycle rider.  It does provide nice views of Mount Evans and the Front Range mountains but I found the best view to be from outside the park itself:

Near the entrance to Daniels Park

Leaving Daniels Park and heading towards the junction with US85, I pointed Scarlett towards Sedalia once we got to US85, heading north.  Turning west at Sedalia, we went almost to the mouth of Jarre Canyon but turned towards Bee Rock for pictures.

It's been a while since I'd been to Bee Rock for photos, I bet it'll look much better with snow come Sunday/Monday, might have to return. 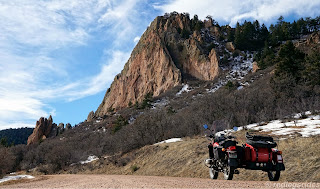 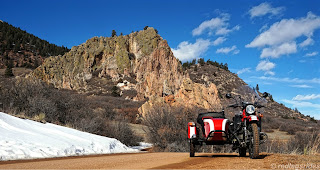 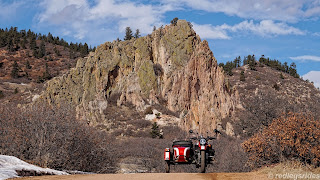 Scarlett and I stayed on Bee Rock Road which traverses the Pine Cliff Farm's property.  One must stay on the road in order to avoid trespassing.  We came to the junction with Colorado Highway 105 and we turned north on it back towards Sedalia to get fuel for Scarlett.

All fueled up (30 mpg), we got back on US85 and headed north into the metro area.  Using County Line Road, we traveresed the bottom edge of the metro area back towards the DTC or Denver Tech Center area.

Since Mount Evans was showing rather clearly today, we motored up Yosemite and then Quebec Roads towards the Westlands Parks area for the usual gateway picture: 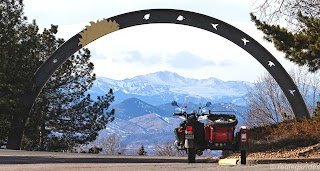 After the above picture, it was homeward bound via the Cherry Creek Dam Road and the usual cager-infested Parker Road to Smoky Hill Roads and home.

I hope the weather guessers get it right, we could use some snow around here!
Posted by redlegsrides at 3:15 PM 5 comments:

Today it was only the second time I'd ridden Brigitta, my '87 R80 Airhead Beemer, since the start of the new year.

It was to be a short ride however, as we were out to catch the Friday sunset, hopefully a good one to herald what should be an interesting weekend weather-wise.

We're expecting temperatures to reach almost 60 degrees Fahrenheit on Saturday and then a Winter storm moves in Saturday night with forecasts of 5-8 inches of snow by Monday afternoon!

If only half of the expected snow shows up, it'll be a while before Brigitta can go riding again so this evening was the time.

Hope you like the pictures, had to move Brigitta to a different location after sunset, the colors were presenting further to the south than usual.

At the second location, still missed the red colors mostly

Scarlett and I went for a short ride during lunch today, the skies were quite clear and the views of Mount Evans (though slightly hazy) still made for great background material for the photos below.

The east coast is recovering from the record snow falls from the weekend, here the light snow that fell overnight is almost all gone.  :(

There is however, 3-5 inches predicted for Sunday evening, so here's hoping! 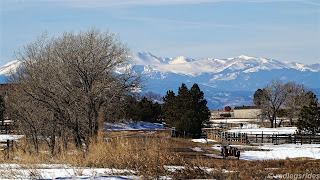 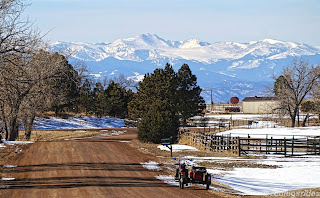 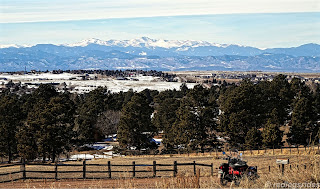 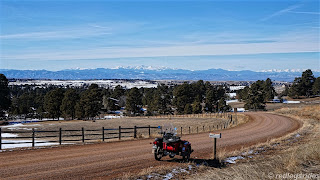 Posted by redlegsrides at 3:31 PM 8 comments:

Sunday Sunrise and Uraling along the Platte River Roads

I woke before dawn this morning and since I was up, went out to try and catch the sunrise.  I'd apparently missed a pretty good one yesterday you see. 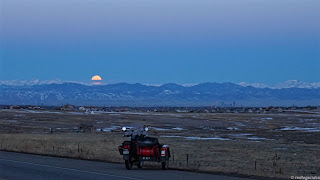 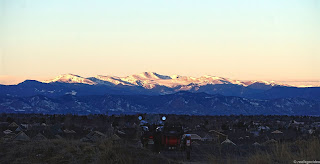 The sunrise was disappointing in the colors it produced on the eastern sky, still, not too bad considering.

I went back home and did some chores and then headed out once more on Scarlett just before noon with no destination in mind really.  It took some wandering down county roads towards Franktown and then from there more wandering to Russellville and later county road 11 towards Castle Rock.

Strangely banded cows I saw on the road to Russellvile

As I approached Castle Rock, my mood lightened and I started enjoying the ride.  Up until then, it had been more of a chore than anything else you know?

It occurred to me that it had been a while since I'd been down to the South Platte River Road which leads one to the small settlement of Foxton.  Now armed with a destination, Scarlett and I made our way to CO105 from Castle Rock, and turned west and south from Sedalia on CO67 towards Foxton.

The road there was about 19 miles of tight twists and turns, sharp ascents and descents, on terrain that at times was snow-packed, to muddy, to dry dirt to snowy mud.  It kept my speeds down but then again, I wasn't in a hurry either.  After all, no sense sliding on some ice and off the road right?

Finally got to the Platte River recreation area near Scraggly Peak and from there it was slow wandering alongside the river taking pictures at the usual spots: 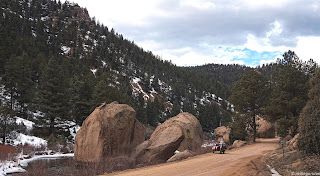 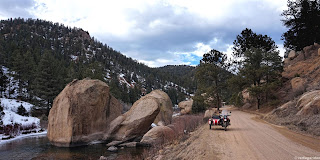 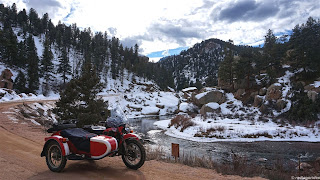 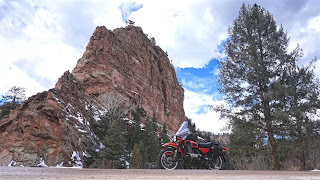 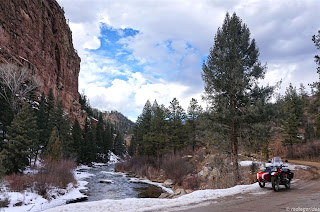 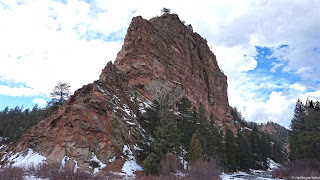 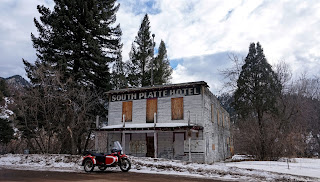 Coming up on the monument below, I was surprised to find it had been moved closer to the edge of the road, it used to be further in, closer to the water.  The sign next to it explained the move and gave some badly needed history for the monument. 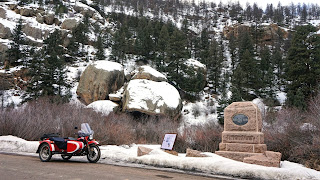 Monument to a Railroad Hero 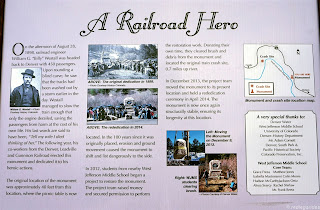 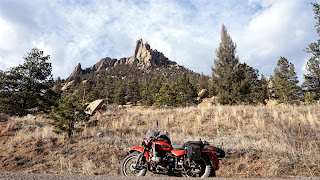 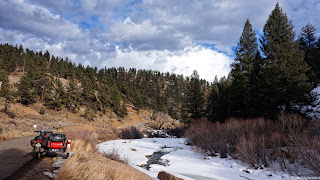 In the photo above, you can see the road which takes one back
to US285 and from there back to town. 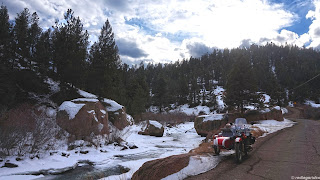 Pictures done, I took the paved road north towards US285, this is a wonderfully twisting road by the way, just watch your speeds on the southbound lane since you can get going pretty fast due to the steepness of the road at times.

Once on US285, Scarlett and I slabbed it all the way home.  Temperatures would range from the mid-40s at the start of the riding, to the mid-30s on US285 and back to the mid-40s once I was back in the metro Denver area.

I'd started the ride under clear blue skies, you can see clouds were gathering throughout the day as I rode.  We're supposed to get some snow tonight, but I've my doubts it'll be much of anything.
Posted by redlegsrides at 6:54 PM 7 comments:

While the east coast states are beginning to feel the effect of the large snow storm that is predicted to dump up to 30 inches of snow; we in the great state of Colorado enjoyed a nice warmish sunset.

Personally, I wish the situation was reversed of course but Mother Nature will do what she wants. 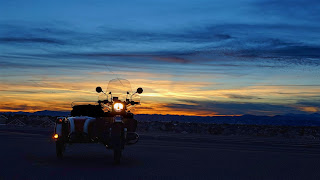 Posted by redlegsrides at 6:14 PM 4 comments:

Scarlett and I returned to the usual sunset viewing spot instead of the one recently used near Buckly AFB. 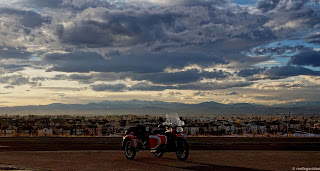 Shortly after 4PM, the clouds promised a nice backdrop for today's sunset 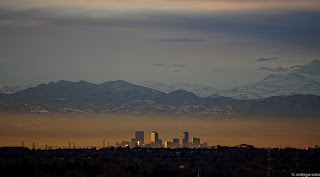 The "Brown Cloud" that Denver is known for when they get
a temperature inversion.

The following sequence of shots are chronological, hopefully showing you the sunset colors as they deepened with the setting sun. 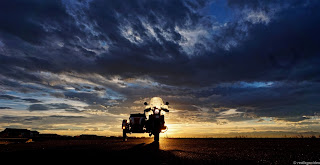 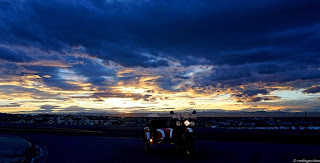 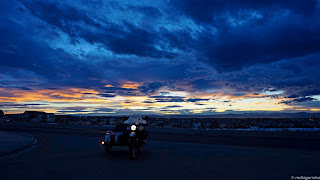 Posted by redlegsrides at 6:26 PM 6 comments: