Martha and I flew to Kauai, one of the islands which are part of the archipelago that is known as the Hawaiian Islands.  It was a seven hour + ride, and as much as I don't like to fly, it would prove to be bearable.

Martha had splurged a year ago and bought us tickets in First Class, so it was quite comfy.  It's back to Economy Class on the way home though, but that's over a week away so not going to think about it. 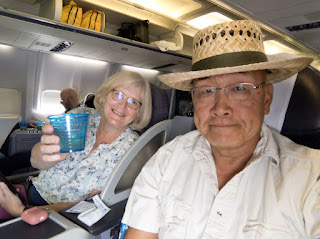 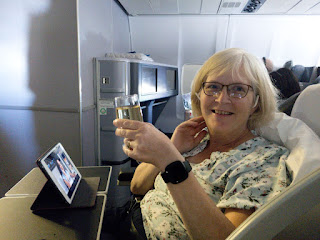 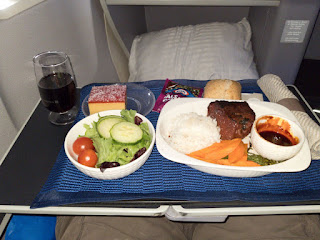 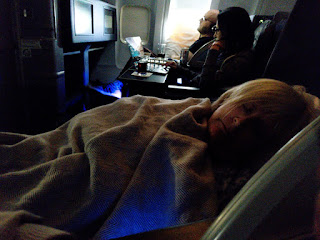 Being able to lay down and nap is really nice... 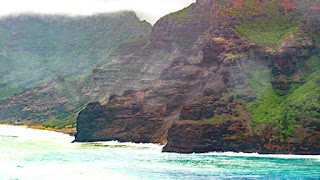 A cliff side view as the plane neared the Lihue Airport

Kauai is four hours behind Denver's Mountain Time Zone, so although it was close to 4PM local when we arrived, it felt much later to us.  We picked up the rental car and waited the couple of hours for our friends: Jane and Larry H. to show up from Virginia via a different airline.

We're staying with Jane and Larry at a Marriott Vacation Club, mooching from them once again.  We've known them since our Army days and they're dear friends.

It was dark by the time we made it from Lihue to Poipu where the vacation club is located.  Long day for everyone.

First full day in Kauai, the weather was mostly cloudy and breezy with the trade winds coming from the northeast.  We all woke up really early since we were still on our home time zones.  So I went out with Larry to catch the sunrise: 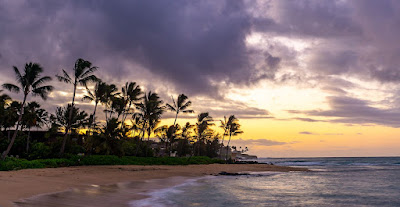 After doing some grocery shopping and some errands around Lihue, we got lunch back at the villa and then we drove over to check out the Spouting Horn:
Basically, it's a hollowed out portion of lava rock, which when the waves hit it, funnels water out and upwards, like a geyser. 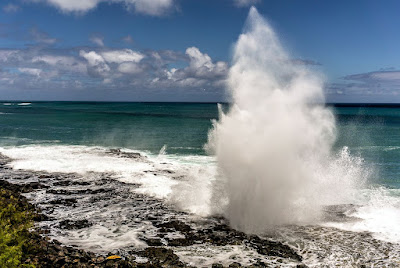 The Spouting Horn
The water was really rough even in the bays, a result of a tropical storm to the south apparently.  There were warnings out telling folks to stay out of the water. 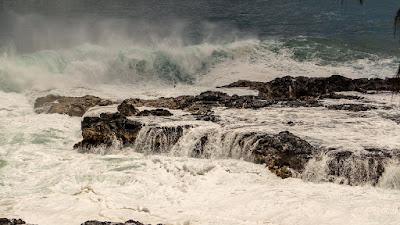 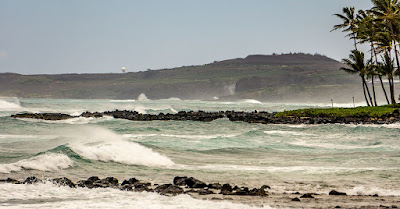 Of course, shooting waves as still photos is rather difficult to say the least, at least for me.  Here's a video compilation of both the morning waves shortly before sunrise off of Poipu Beach and the waves near Spouting Horn Park.

Posted by redlegsrides at 12:47 AM

'...Monday's sunset was OK...' That's what I call out as the understatement of the year.

Nice video. Much nicer to see the wave activity. And first class on the way over, eh? A great way to start the vacation early. At least you get real silverware!

SonjaM, you know me, never quite satisfied sometimes....

RichardM, I can now see how first class comforts are addicting.....thanks for the feedback on the video, still trying to get used to the wider capabilities of the A6000.

Waves... is difficult to capture the power of the sea in still shots. A worthy goal though.
Like you taught yourself to capture great sunsets, trust you will do the same with waves.

Actually Photo # 636 is a great image capturing the power and energy of the ocean waters.

Thanks CCjon re the feedback about wave action....as to the hat, I need all the help I can get! The pineapple we've had so far, delicious!