A Cruise along the Na' Pali Coast of Kauai

After a morning of prepping to go, we left the villa and headed west on Hawaii Hwy 50 towards the Kikiaola Small Boat Harbor near Kekaha.  It was not far and we got there early enough to watch the boats come in with the morning's tours.

We were taking a tour with Na' Pali Experience, in a six person power catamaran: Experience III with its Captain, Captain Roy.  A 28 year old skipper who kept us entertained and safe as we navigated occasionally rough waters.

There were 2-3 stops to briefly explore "sea caves", sadly, the waters were choppy enough and I wasn't really feeling that great, so only one shot worked out: 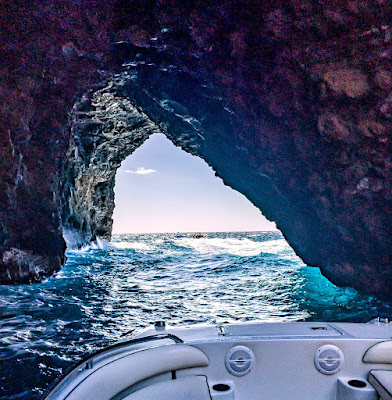 One of the other tour boats leaving the
cave area ahead of us...
Along with several short stops, it took us about 2 hours (probably more) to get to the turn-around point where the really scenic spires are located.  Along the way, we saw the end of Hawaii Hwy 50 West, a US Navy installation's buildings, radar domes and even a C-17 Cargo aircraft.
Here's some views of the spires area at the turn-around point, the water was quite choppy as we bobbed around trying to get shots: 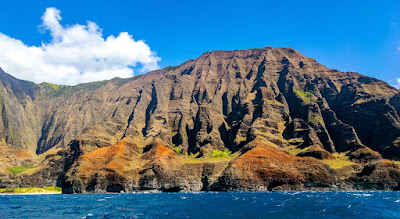 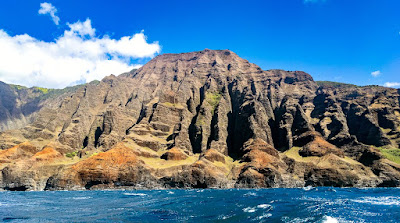 Here's similar shots as we started back: 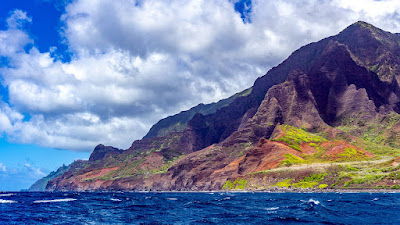 photo by Martha
Here's the pics of the "gang": 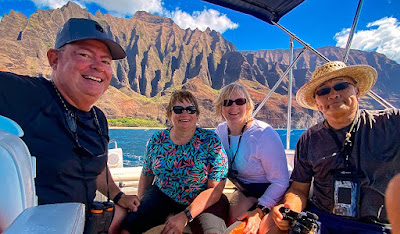 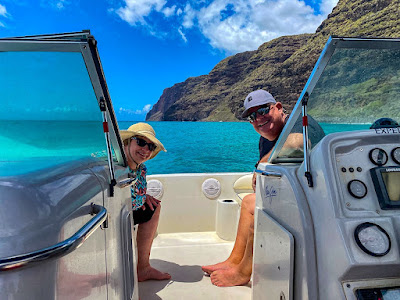 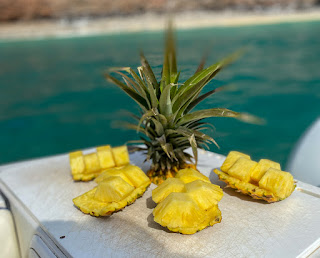 A snack prepped for us by Captain Roy
while we took a brief dip.
As I mentioned before, I was feeling quite queasy most of the cruise.  I found it was best when I could stand and look forward, keeping the horizon level: 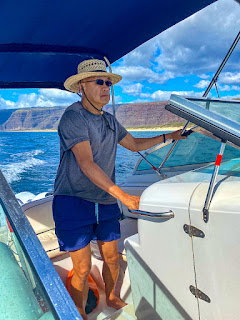 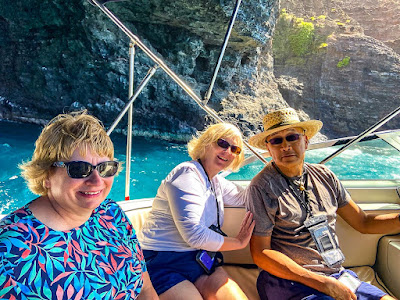 Jane, Martha and yours truly 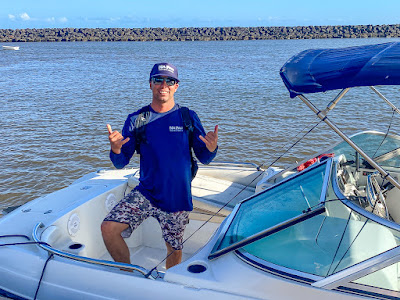 Captain Roy
Posted by redlegsrides at 1:21 AM

Are the spires only found on that island? Nice photos though the water looked pretty choppy. I would’ve looked for a sailboat tour to avoid getting queasy.

You've a point re sailboat RichardM, but it would have been a larger boat and more crowded, and you know how I feel about crowds. The waters were indeed very choppy! Those spire formations are found on the other islands as well, but the leeward spots sport the best color due to more aridness.

Beautiful pictures! Sorry about the queasiness. You and Richard are the same. Any flowers to get pictures of?

Bridget, Glad you found the flowers in the other post. Thanks for the feedback, didn't realize that Richard also had a penchant for Terra Firma, I definitely picked the right service when I join the army.