Visiting Lilo & Stich's Home and it's time to go home.

As you may have surmised from the previous Hawaii postings, there's lot of birds here.  Today, we had a visit from what I'll call a "Gru Bird":

Note: I found the actual character "Gru" in the Despicable Me movies, which I was introduced to here, admirable in his interactions with others. 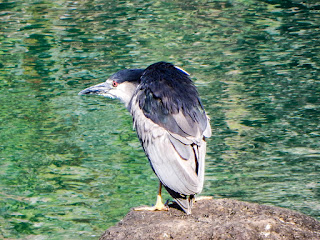 Candidate for Spirit Animal
Only a pair of the Gru birds spotted so far, but lots of these herons: 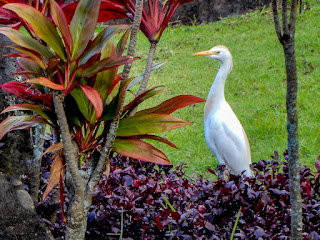 After breakfast, the four of us drove over to the small town of Hanapepe, west of Popui Beach on the south side of Kauai.

Quaint little town, and it's historic area is easily accessible from HI Hwy 50 and yet not too heavily trafficked by cars.  Several arts shops, souvenir shops of course.

Learned also that KOA here in the islands doesn't mean the campground company one finds on the mainland but a type of wood used in furniture and art carvings.

After the "mandatory" perusal of 2-3 art/souvenir shops, here's some stuff that caught my eye while perusing: 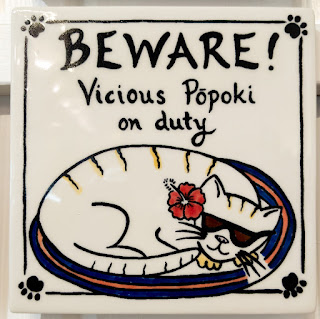 Decorative tile, Thing One requested it
as a souvenir 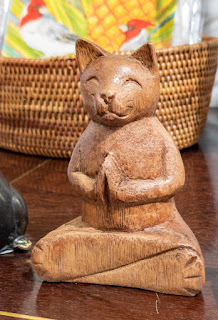 Zen Cat...
Right behind one of the souvenir shops, is Hanapepe's Historic Swinging Bridge.  This time, Martha and I walked the whole length of it, crossing over to the other side. 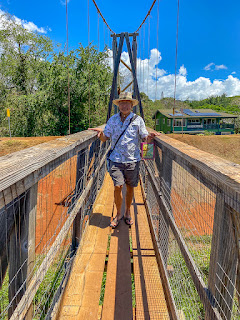 photo courtesy of Martha
It's quite the narrow bridge so when people can't seem to wait for you to be clear before also getting on it, you get some interesting sideways motions to "enjoy".  There's a 15 person limit on the bridge but we didn't come close to testing that limit when there were 8 of us trying to make it past each other. 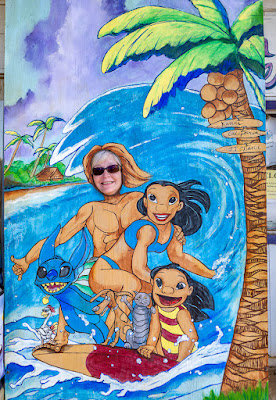 Martha showing off her abs.... 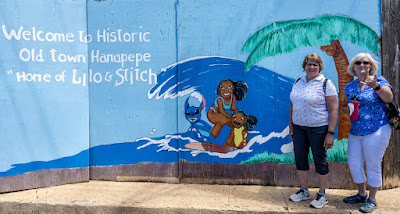 It's been decades since I'd seen the movie, will
take their word for it.
Martha led us down the street so we could check out the offerings of the "Westernmost Bookstore in the US": 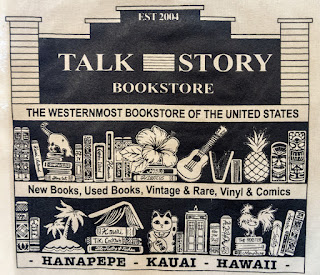 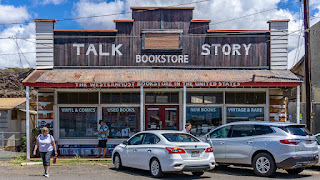 As we walked along, I spied more of those "Then" historical photos with associated facts.  It was time to add the "Now" bit: 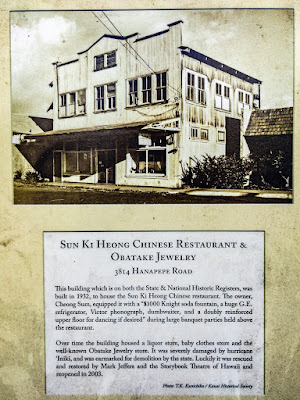 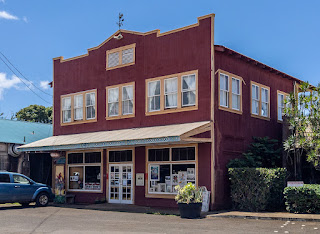 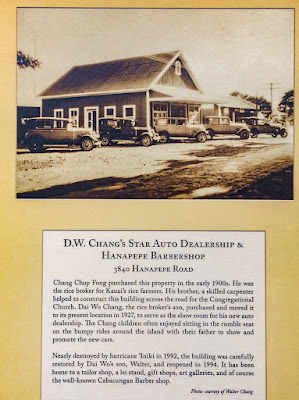 It doesn't really take long to peruse this small town, and we left for lunch in Poipu Beach at the local Bubba Burgers franchise.  Affected by the lack of help, as is most of the US, service was a bit slow but bearable.  It was mainly the non-english speaking tourist who tried to claim my food that was less bearable.
Still, the burger was pretty tasty, so a thumbs up at least if you're ever near one.
The rest of the day was spent either napping or sheltering in place away from the burgeoning stupidity of weekend crowds.
Examples being reported:  People using decorative stones as paths across water instead of using sidewalks.  Dimwit flying a drone among the buildings and over the swimming pools.
Swine using the palm trees everyone else hoped to use to frame their sunset shots as their mounting points for their hammock. 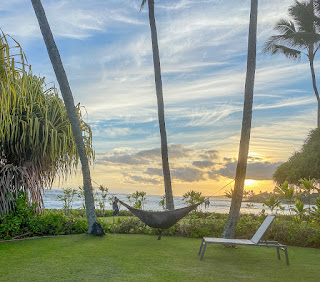 photo courtesy of Martha
Then, some idiot claiming like 8 poolside lounge chairs with beach towels, but no one using them for hours, then exclaiming: "But I've got four suites here, I reserved these chairs, I need them!" when he found them occupied by actual users.
Note.  It wasn't just my own admittedly negative outlook on other people's lack of courtesy reporting this, all the above are from others.  Everyone in my group has said: "it's time to go".
Posted by redlegsrides at 3:07 PM

Yes, it sounds like you’ve had your fill of “touristing” or at least tourists…

You are correct, RichardM...time to go home.