The Sammy gets a New Carburetor

Kudos to Gary at Certified Machine and Design Inc, the Toyota 3K Carburetor and Installation Kit I bought from his company made the installation of the new carburetor a snap!

The installation kit was well worth it, no fabrication of Throttle cable Bracket, EGR Valve Cover Plate, or the several bits of hardware to be sourced by me.  Also Tncluded was a finely machined aluminum spacer in order for the stock air horn to clear the new carburetor.

The only parts from the kit I didn't use were two fuel line clamps as I was struggling at the time to put them in place.  (Later, my fried Dale B. pointed out to me I had the right tool all along, doh!)  I used worm gear clamps instead.

Here's views of the new carb as it came out of the box: 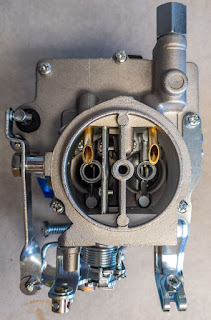 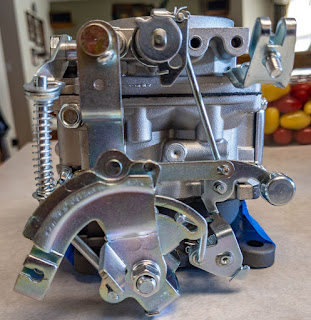 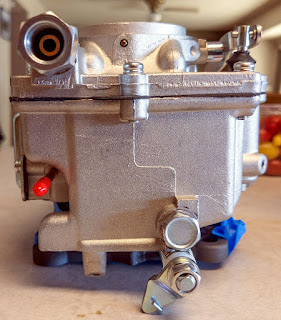 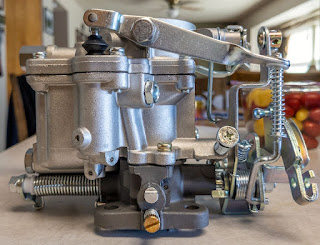 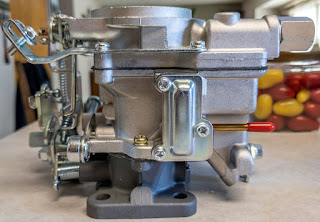 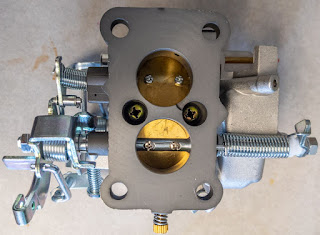 Bottom
Shiny isn't it?  We'll see how long that lasts.
Here's pics as it was installed this morning.  Whole thing took less than 2 hours, I was going slow and methodical. 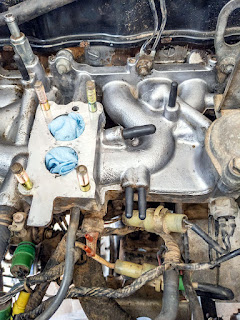 The vacuum ports on the intake manifold
that are no longer needed and so, plugged. 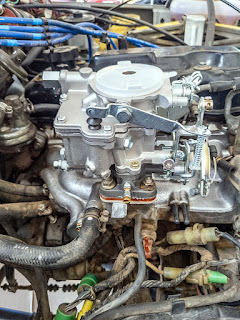 The new carb mounted
Here's the carburetor with air horn mounted, note the silver colored aluminum spacer ring.  The throttle and choke cables were easy to install and adjust.  The instructions provided were clear and the provided pictures made things easy. 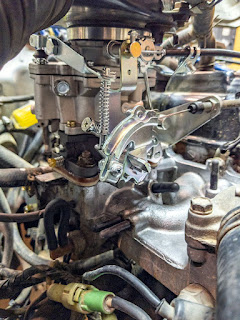 Here's a view of the two Tygon lines provided by Gary of Certified Machine.  The thinner one is the one, yes one vacuum line from the carburetor to the distributor for vacuum advance!  NO other vacuum lines!!!
The thicker line is the Tygon fuel line from the mechanical fuel pump to the carburetor.
Note the inline fuel filter before the entry line into the mechanical fuel pump, this is to ensure only clean gas gets to the Toyota 3K.  Dirty fuel plays havoc with them, as I imagine it does with any carburetor really. 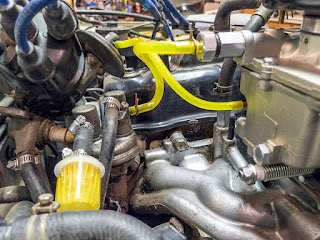 I pumped out about half a quart of fuel before hooking up the carburetor to ensure any debris from the installation was not sucked into the carburetor.    Then I hooked the line to the carburetor and clamped it down with provided clamps.
Checked for leaks, and then she started right up!  I could be imagining things but the engine sounds quieter!  The one thing I had to adjust, was to bring up the cold idle two turns as it was running at 500 RPM.  I raised it to 950 RPM.
Note: see pic re which screw to use for idle speed.  I initially turned #3 (misread instructions).  #2 is the one.  Never touch #1, you become "on your own" in terms of support by Gary.  #3 is to adjust RPMs caused by choke, done during cold weather. 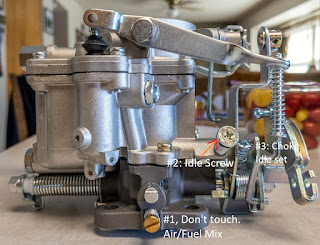 Dale and I took it on a test drive and she did beautifully!  I would end up doing two more test drives during the rest of today, no issues with the new carburetor.
I did manage to knock loose one of the horn wires, easily fixed.
I also managed to finally break off the spade connector on the temperature sensor for the coolant system.  I did manage to restore connectivity using an alligator clip inserted/clamped onto a spade connector and its online again.  I'll have to see if the clip is field replaceable or I have to get a new sensor.  (That can wait). 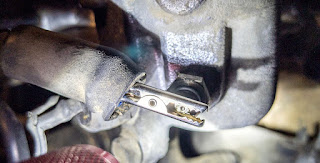 Going to do some more test driving tomorrow, to make sure all is well with the new carburetor.  I should have done this a long time ago!
As to the worry of some overzealous tech at the emission testing facility taking issue with there being a non-stock carburetor in play, I'm going to drive the Sammy by one of their mobile testing stations about a month before she's due for emissions testing and I'm sure she'll pass.
This way, no overzealous tech looks under the hood.
And yes, their Colorado AirCare website says that they only look for an oxygen sensor, catalytic converter and air pump (which the Sammy doesn't have).  But this way, no possible conflict with a tech.  The age of the Sammy also dictates the test done is the tailpipe test so all good, she's passed that one shortly after I bought it a year and a half ago.
I still can't get over how easy the install went, and how quiet the engine seems now.  Stay tuned.
Update: July 13: Completed a 100 mile round trip on pavement and dirt, with hills and trails thrown in for good measure.  The carburetor did great!
Oh, and the occasional back firing is gone!
Posted by redlegsrides at 7:54 AM

Indeed RichardM, in spite of my ham fisted mechanical skills.

Kudos on a clean install.

Did you test drive at altitude? Will Sammy breath better with this new carb?