Home from the Rally

The rally ended yesterday evening, nothing left to do but pack up in the morning and head home for everyone.  That is, except me, I would go boondock for the night to check out a possible site to the south of Hotchkiss.

I did a little helping in the putting away of stuff such as chairs and table, but mainly said my goodbyes to friends old and new.  A rather enjoyable rally in spite of me trying to hack up a lung the first two days!  The second Shingle shot really kicked my butt!

I drove to the BLM site (location undisclosed as its near the locals' secret spot) and about 1/4 of a mile in from the road, found the site and settled in:

It was another hot day but I stayed in the shade as much as I could, took several quick outdoor showers to cool off and enjoyed the solitude after almost three days of non-stop socializing!
Just before 8PM, I drove Scarlett the 6+ miles of rough dirt road to the "secret spot" and found the lighting of the now over cast day to be disappointing in terms of lighting up the rock formations.  The angles were just wrong you see.  I contented myself with the below shots. 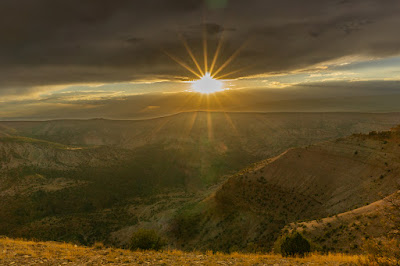 Based on the clouds covering the horizon, I decided to forego waiting for the sun to set and instead headed back to camp.  I should have stayed, for as I rode back, I saw a colorful lighting of the horizon in the distance behind me!  Oh well, at least I avoided riding back in the gathering dark.

Woke shortly after 6AM and broke camp, leaving the site around 8AM.  Not a bad site, but its apparently a resting spot for cattle as there was plenty of evidence of cow poop.  Not sure why but it took me almost 6.5 hours to get home, no issues otherwise.

Posted by redlegsrides at 8:33 PM

Great last pic, Dom. It feeds the wanderlust in me.

That was a nice one!!

You almost lost me at three days of socializing.😬 Nice that you were able to get away and decompress. The sunset pics are lovely even if you left too soon.

Bluekat, the friends I socialized with were worth the being around people...but yeah, had to get some solitude in before heading home.