A new site, and a unrelated repairs kind of day

I drove Scarlett out to Brown's Canyon National Monument this morning, it was quite brisk, and all for naught since the Ural could not make it past some really big rocks near the entrance to the monument!  Not sure what the BLM and National Forest Service are thinking in terms of facilitating access into the monument but right now only high clearance vehicles and four-wheel drive can make it!

So I returned to camp to fetch Yagi but decided to first displace about another kilometer away from town to a new site. 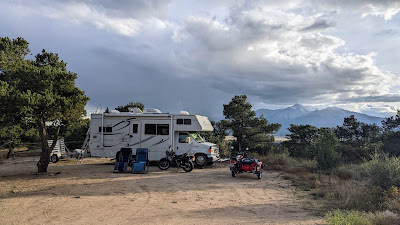 I had to bump start Yagi to load her onto the front rack.  I had been having issues with the battery and I think it was now dead.  My fault as it was a lead acid battery that you had to pull maintenance on and I had failed to do so.

Removing the old battery proved to be quite the bugger! Took me over an hour with many tools before I got the nuts off that held all the cables to the old battery! There was massive corrosion, and extraneous accessory cables that weren't necessary which caused binding.

Once I had the new site set up, I also did some more troubleshooting on the Harbor Freight Predator generator that had been giving me issues.  Thanks to RichardM, I would eventually get it running today; the theory is there had been some blockage in the fuel flow.

So I headed into town on Scarlett in search of a new battery for Yagi.  I tried all the likely candidates and finally found one in the NAPA store!

However, they did not have the lead acid that you're supposed to put into the battery; they only happen to have the battery because somebody had ordered it and had never picked it up!

While in town I also picked up a new spark plug for the generator in hopes of fixing the issues but it proved to be fuel flow.

I would have had to wait 3 days for the right battery to be ordered by a different store so my having to wait till tomorrow morning to pick up the acid that Napa is having sent out from Denver is quite acceptable.

I'm really tired and sore from bending over working on both the battery and the generator!

Needless to say, Brown's Canyon National Monument will have to wait for another day! 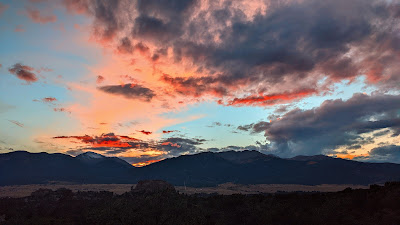 Posted by redlegsrides at 6:16 PM

But you found a nice sunset!

Glad you didn't have to wait too long. Nice sunset photo!

Thanks Oz, Yagi is back online...

Strange that they sell batteries but not the acid. Hopefully by now you did receive the acid from the store.

It was strange Kofla, and the guys at the store acknowledge this. So I was comped the acid when I picked it up this morning.