Winter's first coat on the local 14'ers, Yagi is back in service, and a Sunset

Pretty relaxed day today, drove into town after 9am to pick up the sulfuric acid from NAPA to put into Yagi's new battery.  I then put it on a charger for the rest of the morning in order to fully charge the battery.

Here's some fall color I spotted while returning to camp on Scarlett...

Over this past weekend, I captured and forgot to post these pics of Winter's first coating of snow on the peaks of the nearby 14'ers. 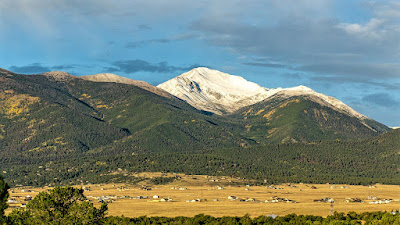 A thicker coat as of yesterday...

After lunch it was of course time to do a test ride with Yagi and its new battery.  I basically wandered in the immediate of the new campsite within the Four Mile Recreation Area. 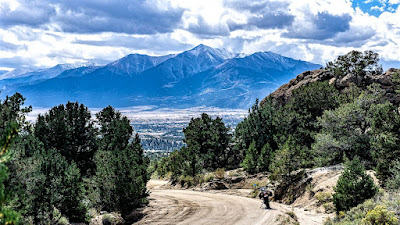 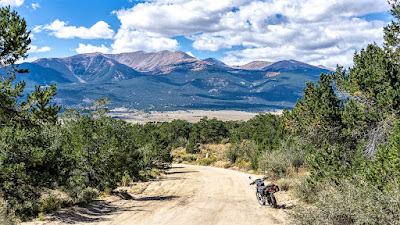 Mount Harvard, I think
I then rode Yagi down to the river and shot this fall color from near the railroad tracks, along CR 375. 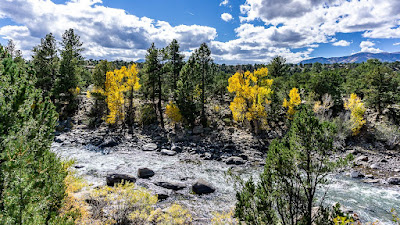 Most of the rest of the afternoon was spent resting my back, I was feeling soreness from all the bending over to replace Yagi's battery and working on the generator the day prior!
Tonight's sunset's lighting of the clouds came out pretty good.  I was situated atop the VRRV for these shots:

Posted by redlegsrides at 8:09 PM

You are catching some fantastic fall colors, changing of the seasons, I love the Fall too.

Thanks CCjon, though I could have waited on the snow's appearance for a bit longer.

I love the many colors of fall and the snow adds a great dimension to the photos.

The best season to be on the road. Love the snow dusted peak!

Love the snow covered peak. Fall is just the best season to be on the road.

Thanks SonjaM for the comments.

Indeed it does, Oz.... Thanks for commenting.

Sorry for the double comment, Dom. I got an error message on the first and hence, posted another one ;-)