I returned to the same spot as yesterday's photo of Mt Princeton, but the lighting was better: 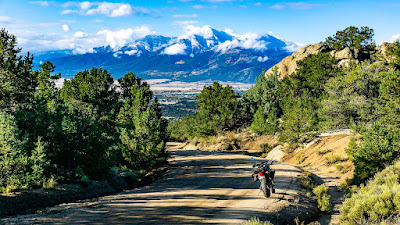 I went riding on Yagi, my TW200, within the Brown's Canyon National Monument hereafter referred to as BCNM.  There's not much in terms of trails, basically the main trail 300 which is wide enough for two vehicles passing each other; and then there's 1434 which is basically single track.

The BCNM it's just a few miles south of the junction of US 24 and US 285 just south of Buena Vista.  There's no signs yet on the highway, just look for the sign that says Ruby Mountain recreation area or Fisherman's Bridge.

I decided to explore 1434 since I was thinking 300 would be too easy.  There turned out to be a lot of hills, steep inclines and declines, and I lost count of the many, many, many Whoop-Dee-Doos that one encounters on that trail!

In case you do not know what a whoop-dee- doo is, think wide speed bumps making you feel like a roller coaster ride.

Some technical spots here and there, mostly before you hit or leave the summit of the hills but nothing that Yagi and I couldn't handle.  The ground was nice and dry, good traction and the only problems were loose rocks.

I took 1434 to the end and then turned around heading towards 185.d which would then eventually take me back to 300 main trail. 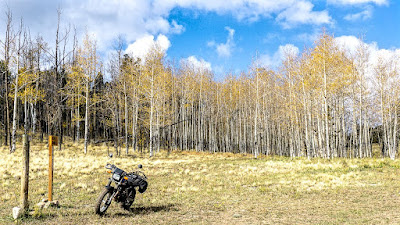 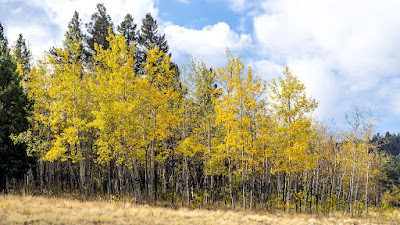 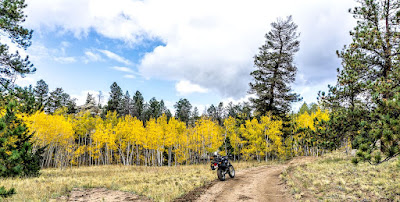 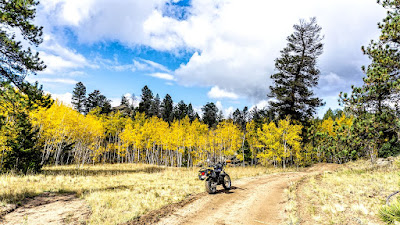 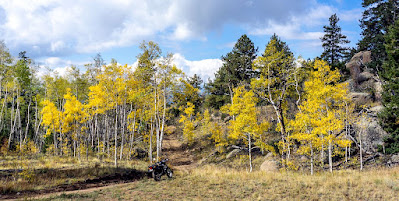 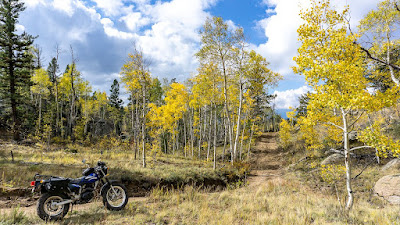 Things got a bit less fun and much more technical after the above picture while on 185.d.  The overnight rains had made the trail quite slick and the churning wheels of the OHVs had not helped things at all.  And of course, it was all downhill....

Yagi and I hate mud, really really really hate mud. Mud and steep hillside portions of the trail had me and Yagi slip sliding here and there trying to maintain control even though we were going really slow.

Still, my luck ran out and I biffed it pretty good on one slick portion; Yagi falling on its right side onto my right leg until I manage to kick her away from me and free my leg.  I was worried about the hot muffler but that proved no issue.  Slippery mud aside, this fall was my fault.  I went from second gear into first but managed to put it into neutral instead....so, no engine braking, too much speed... 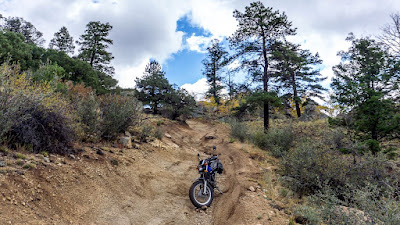 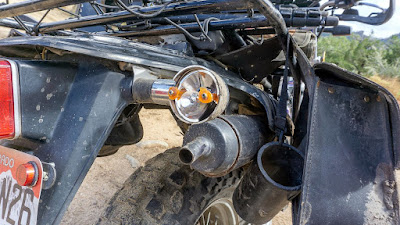 Broke the lens on the turn signal and the
tube supporting the saddle bag was dislodged.

I biffed it again surely afterwards on yet another muddy portion: 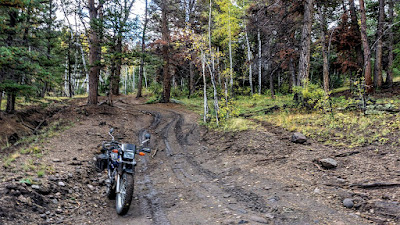 You can see, by the tree in center picture, where
Yagi's rear tire slid out on me... 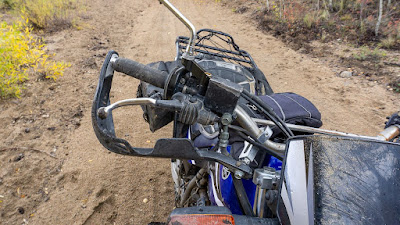 The right hand guard got bent down but
protected the lever as designed.

Again, Yagi fell to the right and I went flying off to the side, still no problems or injuries except for my right calf now really throbbing from the previous impacts.

Eventually, and not soon enough, I ran out of steep muddy sections and it was just mostly sandy sections all the way to the main trail 300. 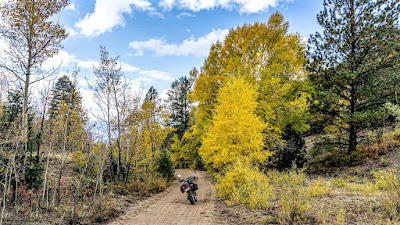 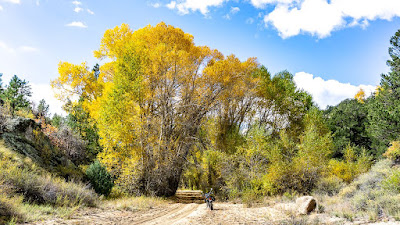 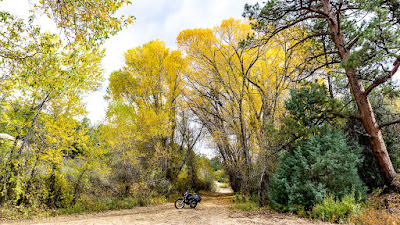 Back near the entrance, by the Arkansas Headwaters
Recreation Area.

Trail 300 eventually led me back to the entrance of the BCNM and back onto US 24 heading towards Buena Vista.  My right calf was feeling very tight and it caused me to gimp along when I made a stop in town to pick up some supplies.

Yagi got me back to the campsite with no further issues, and before I laid down to elevate my right leg with a nice pack I fixed the damages on Yagi. 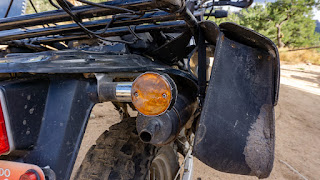 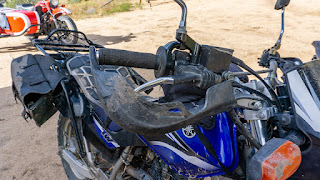 A bit more scratched up but in position again

I am pretty sure my right calf is going to bruise up pretty nicely, mobility is impaired somewhat but not too badly. I guess the next couple of days are going to be rest days huh?

Posted by redlegsrides at 7:34 PM

Looks like perfect Tdubbing riding, sorry you met the ground once...twice. We had a long weekend, lovely riding. I tight U-Turn brought me down and now I have a hamstring yelling at me. The only bike issue was a loose mirror.

I hope your bruised calf doesn't give you too much hassle, Dom. Thankfully nothing really serious happened during your mishaps. I wonder, do you have cell phone reception in that area or do you have a beacon or tracking device on you in case you get stuck (for whatever reasons) in the middle of nowhere?

Coop, except for the mud, the trails were pretty awesome for the t-dub. Sorry about the hamstring, hopefully it'll heal soon. My calf is doing much better today.

SonjaM, My calf is doing pretty good today, just little twinges as I walk but no real pain. I see your question, I do have good cell coverage where I am right now but have also activated the inreach coverage plan for my Garmin Mini satellite locator beacon.

Ouch! Sorry you had some difficulties. I haven't been to Mt. Princeton but the area looks great for camping and hiking also.

The calf is feeling much better Oz, now dealing with occasional lower back pain....not related to the crashes, more like the large amount of bending over while fixing the generator and replacing Yagi's battery earlier in the week.