Warmer day due to bright sunlight.  We did wake to 24 degrees Fahrenheit, which revealed the metal supports beneath the roof of the VRRV: 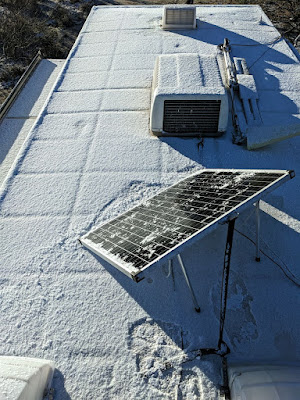 Once things warmed up enough, we returned to basking lizard mode: 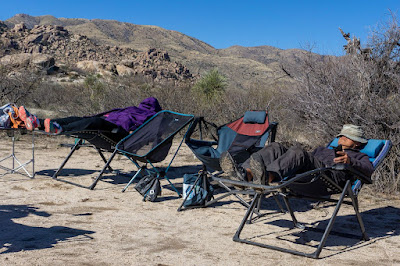 While Lori Z. and I dozed in the warmth of the sun, Chris decided to do his basking up on the nearby rocks: 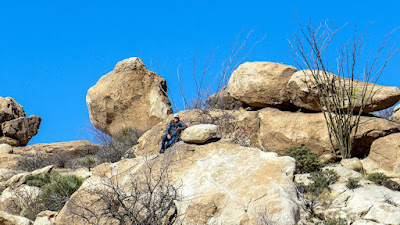 I did some packing up in the late afternoon, such as loading Scarlett back onto the trailer.  The ramp's new hinges held fine and no issues encountered.
Dinner was in the VRRV with the Z's providing chicken and veggies for my fried rice.
Wednesday, January 25
Pretty good day overall, with nicely sunny weather conditions.
I left Indian Bread BLM and the Z's shortly before 8:30 AM.  I was slightly delayed in my departure due to a recurring blown fuse for the trailer lights.  It turned out to be an exposed wire connection for the license tag light.  Lori spotted it as I worked to find it, and she secured it out of the way.  All good.
The Z's are waiting for some items and mail to be delivered in Willcox and have to delay their departure for a couple of days.
I drove over to Mountain View RV Park in Bowie and dumped tanks and took on propane and water.  I had consumed 5.7 gallons of propane over the last week, lots of heater use due to the extremely cold temperatures at night and during the snowy days.
Next stop was the town of Willcox where I got some more hardware to reinforce the trailer, oil for upcoming oil changes for the motorcycles and the generators.  I also got groceries nearby at the Safeway while there.
Next stop was Benson where I met RichardM at the Texaco station near the RV park he and Bridget are staying at.  He's letting me borrow his sawzall you see, just in case it's needed when I bolt on the angle iron reinforcements soon.
Finally, I arrived at the Dragoon Mountains Dispersed Camping area, I think it's run by the USFS.

There were more campers than I like to see and the two sites I'd hoped for were taken.  Site #3, which I'd seen but not used in previous trips, was available and I claimed it for the Z's and myself.

Here's views of the campsite, during the Golden Hour, with the Dragoon Mountains in the background: 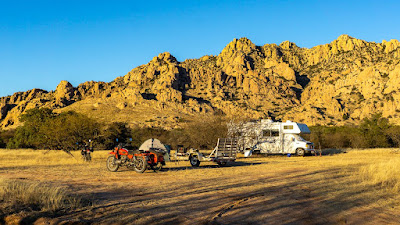 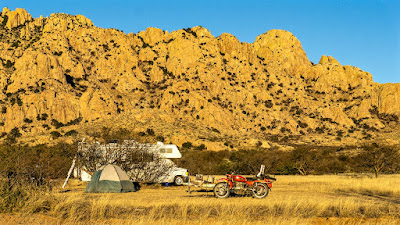 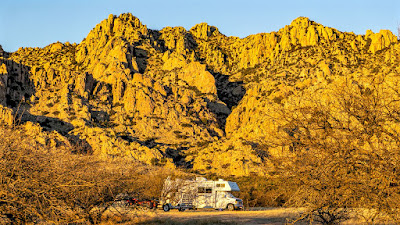 A sunset with no clouds, but still, it provided a nice back light for the VRRV:

It's supposed to get into the mid to low 20s again tonight, still testing the use of Reflectix, packing blankets (to isolate the driver compartment) and such to retain heat.  So far, the changes have caused the temperature differential between the outside and inside from 31 degrees (on average) to 37 degrees, not too bad.

I might try closed foam board insulation on the big windows later on, not sure.

Posted by redlegsrides at 6:42 PM

Email ThisBlogThis!Share to TwitterShare to FacebookShare to Pinterest
Labels: arizona

Who sleeps in the tent?