All these years, I thought Huachuca, the name of the Army Post located in Sierra Vista, AZ and home of the Army's Military Intelligence Branch meant Dirty Water.

Well, today I learned otherwise.  It's actually from a Native American word for Mountain Thunder.  So now you know as well.

Anyways, though sunny, it would prove to be a windy day which made things feel rather cool in terms of temperature.  That and all the day trippers and weekenders by the Dragoon Mountains where I'm boondocking dictated my driving to Fort Huachuca to check out its museums.

First up was the Fort Huachuca Museum which depicted Army Life back in the early days of the mid to late 1860s to after WWI.  There's a heavy emphasis on the Buffalo Soldiers or Black troops who were stationed there before the US Army de-segregated in the 1950s.

Here's some of the exhibits which caught my eye in the small but well put together museum:

The soldier second from the right, wears the blue helmet issued to him by the French Army during WWI.  The 93rd Infantry Division would fight along the French army and were issued (to facilitate logistics) with French weapons and gear  you see.  The helmets for them were a distinctive blue, which became an iconic symbol and part of their history. More info on the Buffalo Soldiers in WWI here: LINK 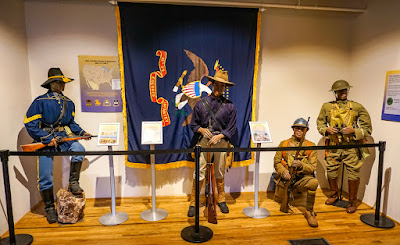 Here's two Buffalo Soldiers depicted in the uniform worn while in the 10th Cavalry and during the campaign to capture Pancho Villa. 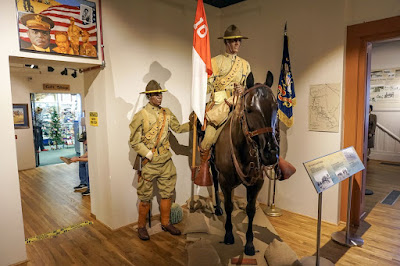 The museum also displayed items related to the battles fought by the US Army and the Apache tribes in the region.  The below photo struck a chord with me as I'd recently heard a podcast by SYSK, Stuff You Should Know, where they'd detailed some of the history and misinformation about this 25+ year long war fought by the US Army.
Cochise and Geronimo are two of the Apache leaders who featured prominently.  I recommend you listen to the SYSK podcast if you can, I found it very informative.  Link to podcast 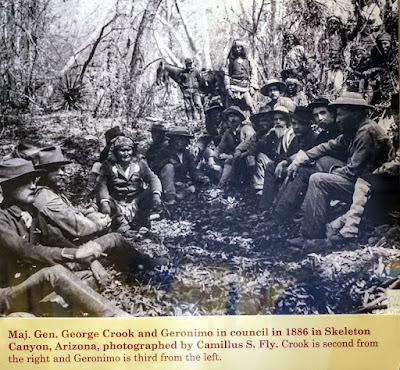 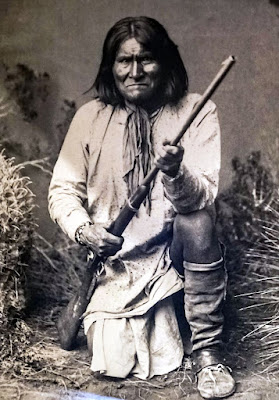 Geronimo
I didn't know before, the history behind what is presently the branch insignia for US Army Special Forces officers.  The modern day version is very close to the middle insignia below. 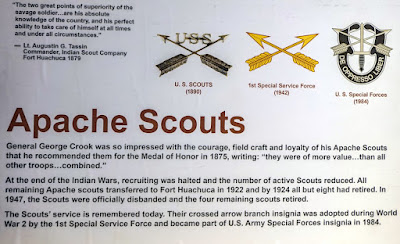 A status in honor of the Indian Scouts employed by the US Army.  It's positioned in front of the old Post Theater which is now the museum annex. 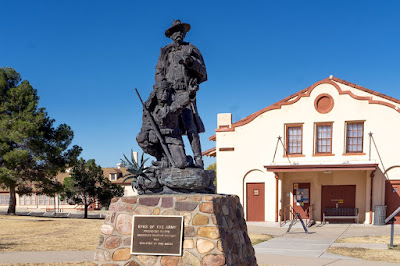 One of the exhibits within the annex was the Slugger.  That's what we called it when we were introducted to them during Operation Desert Shield (oh so long ago).  Their designation was SLGR you see, which stood for Small Light GPS Receiver.
This was the device which enabled army formations/units to cross vast tracts of desert in Saudi Arabia and later Iraq and not get lost. 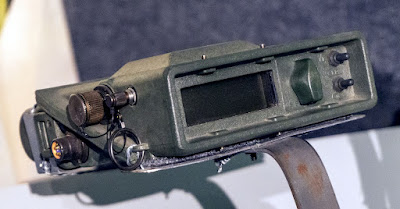 The main emphasis of the museum annex though, was a display of Army UAVs.  It was OK but nothing of any real interest by yours truly.  The only UAV that caught my eye was this one: 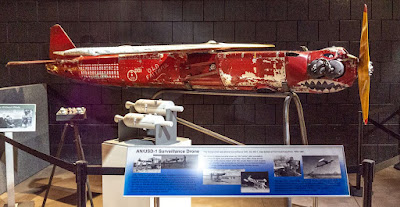 Outside the museum annex, there's a "walking tour" which information placards at intervals detailing some history of a particular location.  I only checked out two of them however.
In case you were wondering why the US Army back then chose this particular spot in Arizona to create a post: 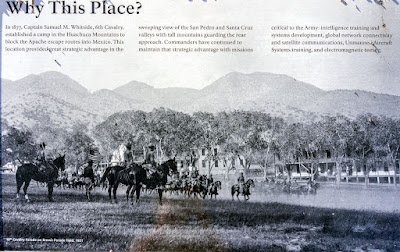 A short drive from the Fort Huachuca Museum, is the Military Intelligence Museum and Library.  Nicely done but again, only a few things caught my eye.
This chunk from the Berlin Wall was quite colorful I thought.  The sign reminded me of my visit to Checkpoint Charlie in Berlin, back when there were two Germanies. 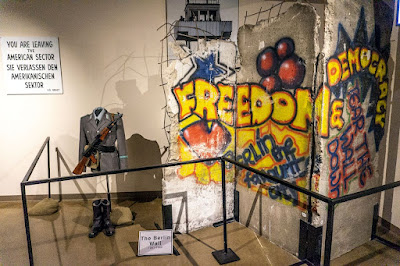 So, besides it's slight resemblance to the Sammy, why did this catch my eye?  Because of the role it played with the US Military Liaison Mission.  I'd never heard of this unit/program.  Very interesting, far as I gather so far, the were "authorized" spies from each side of the Cold War, wandering in the others' territory. 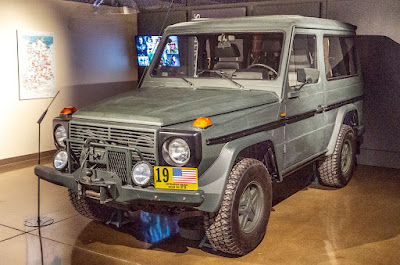 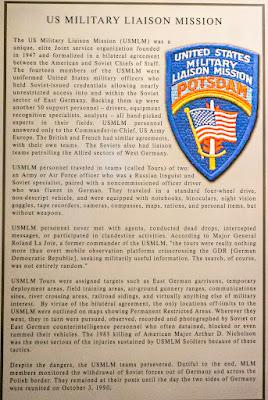 Anyways, that's it for the museums, I gassed up the Sammy and left to return to the campsite shortly before 12:30 PM I believe.  An hour later I was back at camp and it was quite breezy still, so the rest of the afternoon was spent relaxing inside the VRRV.
It's supposed to be warmer tomorrow, I hope that means no cool breezes making it seem cold.  I sure have lost any resistance I might have ever had to cold weather I tell you!  Could be the blood pressure meds I've been put on for the last few years I suppose.  Oh well.
While relaxing in the VRRV, I found this Youtube video which I thought was a good account of the Dragoon Mountain area.  There is a plethora of videos about this area it turns out, not much of a secret.
Posted by redlegsrides at 6:55 PM

It is amazing that back in the mid 1800's, photographs were already available.

Sierra Vista is a much larger town than I had expected. That’s where we got our 2nd Covid shot. Most things were still closed so we didn’t explore much. The museum’s look interesting.

Kofla Olivieri....glad they had the photographer along for those talks with Geronimo.

RichardM, The museums did a pretty good job considering it's very hard to do displays about stuff that is mostly classified at the time and it's dealing with mental concepts. Easier to display a whole bunch of weapons, ordnance and vehicles.