Riding FR697 with Gus and Dave

After a rather relaxed morning of just sitting and reading under a warm sun, basking in the warmth in spite of the shade provided by trees, it was time for some riding.

Actually, the plan had been initially to just go on a pootle, not really exceeding 20 mph and therefore I skipped fully gearing up.  Yes, I know, bad. Very bad.

I was joined by a fellow camper, Dave and his dog Gus.  Dave hadn't been expecting to do serious riding and so wasn't wearing gear either.

The two of us rode out to the FR345 road and headed towards FR 697 which took us up the side of a hill.  Dave, during one of our stops remarked that my TW200's tires appeared to have too much air.

Too much air means not enough flex or contact surface explained.  As I sat on the TW and rocked the front forks while holding the front brakes, he let some air out of the front tire until I was getting a better contact footprint.  He did the same to the rear tire as I bounced up and down on the seat.

I must say, the resulting change in traction and performance by the TW was remarkable!  She wasn't as bouncy on the rocks anymore and felt more surefooted!  I had always though airing down was for deep sand....how wrong I was.

Yagi's performance was so confidence inspiring that not only did I not turn around at a rough patch of rocks but we continued onwards and upwards!  Mind you, we were going pretty slow since Dave's dog Gus was setting the pace! 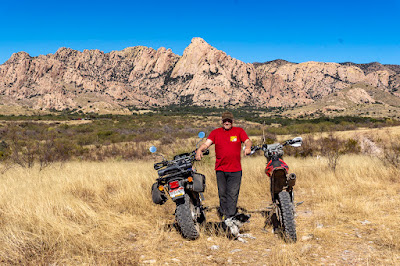 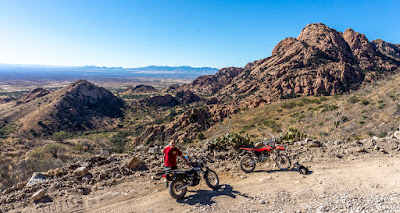 Here's "The Gate" just before China Camp, a set of concrete slabs that are all that remains of a camp.  Apparently, this road had been built by Chinese laborers to provide access to mines in the area.  China camp was where they lived while doing this work. 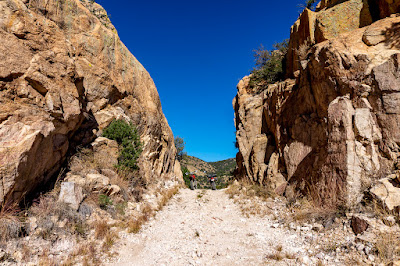 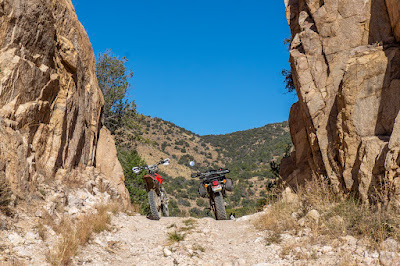 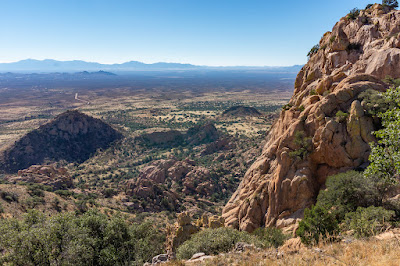 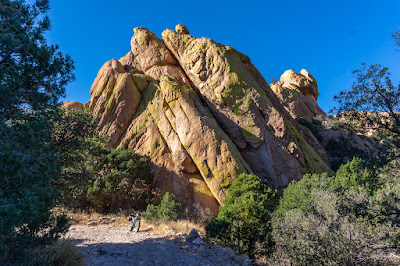 photo courtesy of Dave
We kept going up and up, the trail getting rockier and rockier.  I did drop the TW once, in a very deep rut where I hesitated and stalled it.  No harm, no foul, but it was a good reminder that I should have been wearing gear!
We got almost to the top of the road but it got too steep and rocky for me.  So Dave and Gus continued onwards and got to the top, and got this photo:

After Dave and Gus came back down, we made our way down the mountain, me learning to not use the rear brake and to gently use one finger on the front brake to slow down when needed.  It helped a lot on the really rough and rocky parts I must admit.
Dave noticed that Gus was having some issues with running on the way down and decided to get him to ride on the front.  Gus at first didn't like it one bit and kept trying to, and succeeding, in jumping off after Dave would ride a little ways.
Once we got back on FR345 which was smoother and more level, Dave tried again and this time Gus seemed to get the idea of staying on the bike: 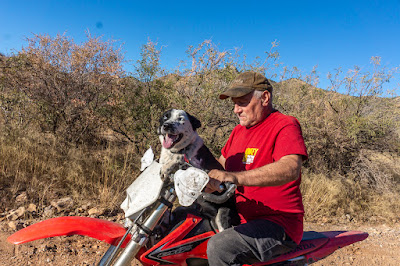 We then made better speed all the way back to our campsite.  I must say again, the lowering of the air pressure on the TW's tires made a rather significant difference in traction.  The loose gravel and rocks were like nothing to me now.  I shake my head on how much I've been basically fighting Yagi, the TW200, by not lowering the air pressure when off road!  Oh well, now I know and must practice more in this manner.
My thanks to Dave for showing me this setup and the riding tips he imparted while we rode along.
It was, per Google Maps, 7.3 miles from campsite to the furthest point reached by me.
I measured the air pressure the next morning: 6.5 PSI cold.
1130 am 70F 8 psi front 8.5 psi rear
Posted by redlegsrides at 6:09 PM