I left the Dragoon Mountains shortly after 8AM this morning, stopped at Benson, AZ for groceries and cleaning supplies at the Walmart and then headed east on I-10 towards Bowie, AZ

Stopped at the TA Travel Center and paid $10 to dump tanks, then drove on over to the nearby KOA Campground where I got water.  Surprisingly, it was no charge.  Wonder how long that will remain the case.

Anyways, kept going east on I-10 for a short while and turned off the exit for Bowie, AZ and from there it was less than 8 miles or so to the BLM recreation area.  The road is dirt, a bit wash boarded but take it slow and its fine.

The site I'd stayed in before was taken.  Figures, it's a nice site and all by itself.  I kept going into the campground itself and parked the VRRV to conduct a recce with the Sammy.

I soon found a nice spot away from the main camping area where most of the other campers are; there's perhaps 8 others, maybe 10.  The site I found has no other sites within sight of it and there's a bit of rocky road to get to it so hopefully it'll dissuade some others from coming down the road. 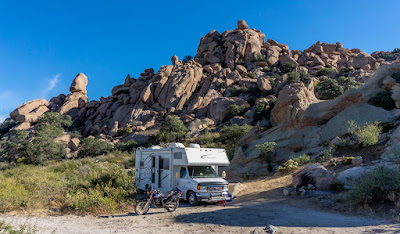 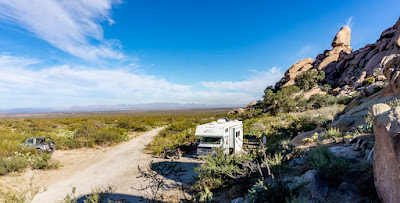 Good cellular data signal, better than the Dragoon Mountains location so far.  The plan is to stay here at least a week, maybe longer.  We'll see.  As you can see, lots of rocks to climb around and explore in the immediate area.

The Chiricahua National Monument is about 34 miles away according to Google Maps so I hope to explore that as well.  Maybe do a recce for campsites closer to it which are listed on allstays.com but what reviews there are sound iffy.

Posted by redlegsrides at 5:23 PM

It's got great potential each time I'm here RichardM, not too crowded this time either.