A safer way to get on and off the VRRV's roof

Back at the beginning of the summer trip to the East Coast with Martha in the VRRV; I had accidentally damaged the upper mount of the VRRV's ladder.  Basically, while parking under some trees, the ladder hit a branch big enough to bend it: 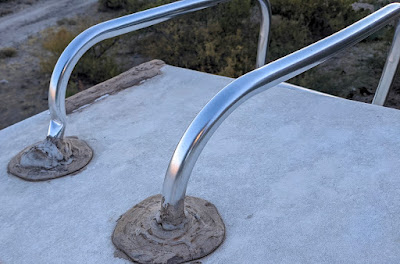 At the time, it had seemed secure enough and it wasn't like I was going up and down from the roof on a frequent basis!

Fast forward to the last month or so, and I've found myself going up and down the ladder at least twice a day, sometimes more.  I was rotating the 100 watt solar panel from Harbor Freight you see, trying to capture the most sunlight in the most perpendicular angle as possible.

Yes, leaving it laying flat gets some sunlight too, but just raising the panel on its legs made it so much more efficient.  In order to avoid having to rotate it and such, adding another 100 watt panel and have both panels lying flat would probably do the trick as well.

However, I lose the ability to position the panel elsewhere when parked under trees, for example.  That, and my energy budget is so small, I'm still not convinced to add more panels and mount them on the roof.

So, all this up/down activity had worn on the damaged mount on the roof it seems.  I can now move it sideways slightly, where before it had been rock solid.

So, some research later and some consulting with RichardM, I chose a telescoping ladder that was in stock at the ACE Hardware store in Willcox, AZ.  I drove there with the Sammy since no way I could bring it home with the TW! 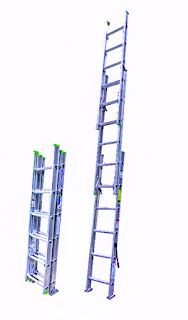 A Werner 16ft Extension Ladder Type II
with a 225 lb. capacity
Image source: ACE Hardware
Even though the ladder collapses for storage down to 6 feet long, it was a small cargo challenge for the Sammy. 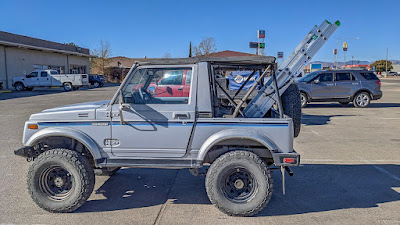 I returned to the VRRV and checked out how to mount this ladder when traveling.  Tried to place it horizontally on the bumper but it obscured the left light assembly slightly.  Ended up placing it against the stock RV ladder.  Here it is, held in place by a small ROK Strap just to keep it from moving while I figured out straps for it. 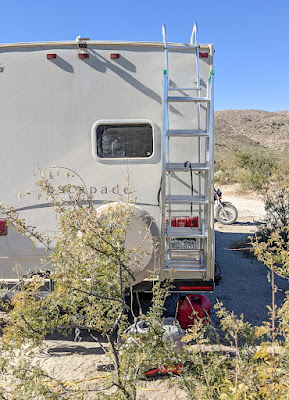 Here's what is close to what I'll be using when next I displace.  A ratchet strap anchored on RV Ladder rungs vertically, and another ratchet strap securing it horizontally, anchored on the spare tire mounting arm and the right side vertical tube of the RV Ladder.
I may move the spare tire over an inch so I can brace the side of the ladder against it tomorrow.  We'll see. 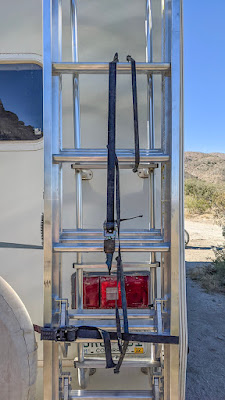 Once I tightened things down, the new ladder was not movable.  I even managed to climb up on it while tied down to get on the roof.  So in the case of some quick access to the roof needed, it's doable without deploying the ladder first.
Here's the ladder, deployed, and the same ROK strap securing it to the stock RV Ladder to prevent sideways movement to the left.  Sideways movement to the right is prevented by the RV Ladder itself. 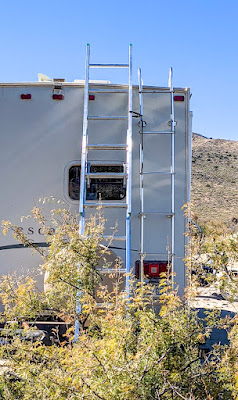 I used the new ladder several times and it's quite sturdy with no flexing.  Another benefit is that now I can use it to access all sides of the VRRV without having first to get on the roof and leaning out/down to reach some spot on the side!  It'll be easier to clean the forward cap too, I believe.
The ladder wasn't exactly cheap but I figure it was cheaper than a trip to the ER after I fell off the RV Ladder should it have come apart from the roof while I was on it one day.  The longer ladder also enables my using a less acute angle, which makes climbing it easier and safer.
Posted by redlegsrides at 5:34 PM

Looks like a great all around solution, not as integrated but definitely more flexible and stable too.

Indeed Coop, apparently the stock RV ladder isn't meant to be used on a very regular basis. The replacement cost for just the ladder was only slightly lower than the cost of the new ladder itself. Not to mention the time and effort and hope to reuse the existing screw holes and sealing things up again!