A sunrise, minor fixes, rock climbing, and a sunset

We had another nice sunrise this morning:

Spent the morning straightening out the metal shield located under the freshwater tank.  One corner had come loose at its weld to the frame member due to my filling the tank one time without opening the drain tube valves!  I was fortunate then to have caught it before it burst the tank!  After bending the metal back into shape using a bottle jack, I then used a metal strip and two bolts to secure the corner that had come loose.

I had originally thought it was put there to help support the water tank but realize now it is to shield the tank from rocks and such coming up from underneath.

After lunch the skies have become mostly overcast and the temperature was only 65°.

I also managed to reinstall the cushion donut under the TW's seat cover; hopefully it will help again on the long saddle days.

Repaired some ripped seams on my motorcycle boots and seal them up with some Shoe Goo.

Chores done, I got on Yagi, the TW200 and decided to ride all the way to the boundary of the Dos Cabezas Wilderness Area.  It was rough going in several spots, lots of big rocks and loose rocks but Yagi with her correctly inflated tires did great!  Yes, there was dabbing and some paddling by her rider but no drops or crashes!

Got to the boundary, marked by the fact the trail ended.  There were a couple of hunters hanging out there by their ATV and they confirmed this fact.  One of them pointed out to me the boundary marker: 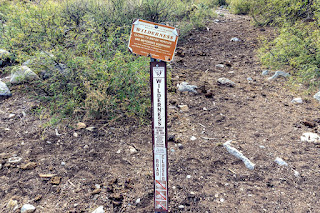 I then turned around and retraced my route, pausing here and there for pictures between rough patches of trail.  Again, no drops or crashes, my lack of "style" notwithstanding. 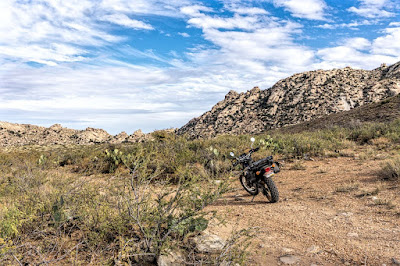 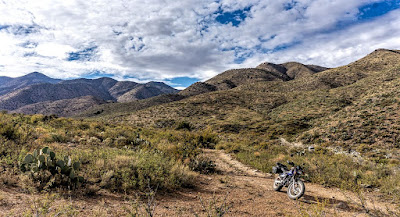 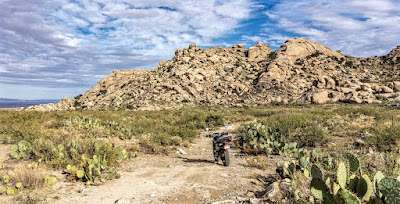 I then meandered over trails outside the camping area, picking up trash if I spotted it.  Once I had both saddle bags full along with items strapped to the cargo rack, I went to the picnic area where the Bowie Lions provide a couple of garbage cans.
The light of the late afternoon at this point made taking clearer pictures of the probably fake petroglyphs. 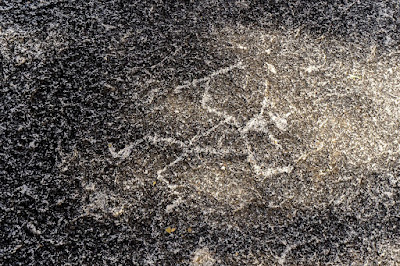 I'd spotted guys on top of the big rock that is next to the picnic area, in fact I saw them descending as I finished getting rid of the garbage.  So I decided to climb up the rock to see what there was to see!  It was pretty steep but the rock is so roughly surfaced my motorcycle boots gripped nicely.
Only had to stop once and made it to the top with no issues, here's the somewhat flat top portion of the big rock I'd just climbed up: 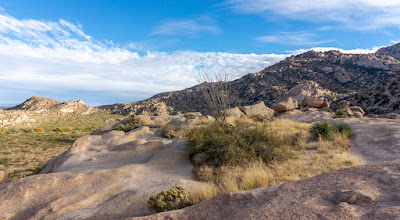 A view of Happy Camp Road, that small mound of rocks with the travel trailer parked near the road is the spot I usually try and use when camping here.  Now that I've found Moai Point, it's become a secondary choice. 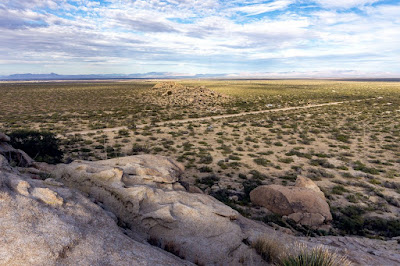 Some neat rocks on top, some perched seemingly precariously. 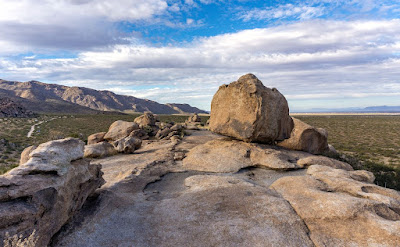 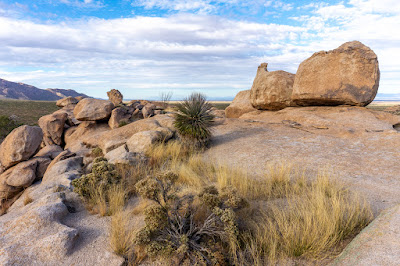 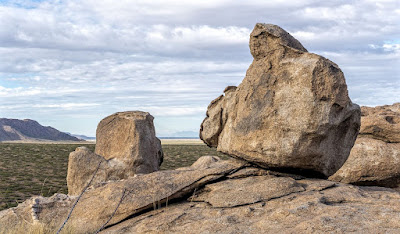 Here's a view of Happy Camp Canyon Road as it goes further in towards the Dos Cabezas Wilderness.  My campsite is around the bend where you see the road disappear.  You can see the other camper units along the road. 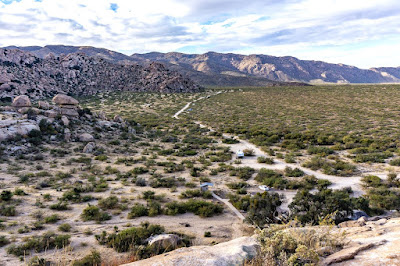 As always, some morons had spray painted graffiti on the rocks.  Luckily, they restricted their idiocy to only one rock that I could find. 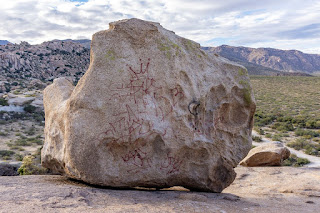 I got back down from the top of the rock with no issues, and yes I was so focused on not falling that I forgot to take pictures of the steepness as seen from the top.
Riding back to my campsite, I passed several cows resting by the side of the road.  Here's a little fellow who contested the road with me for a few seconds before yielding. 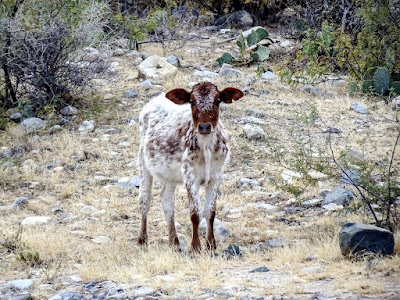 Later on, as I was sitting inside the VRRV, two big bulls meandered by and stopped to stare at me for a while.  Not sure why the bull on the right didn't have horns.  Even some of the cows have horns with the cattle seen here, and yes, I checked for udders. 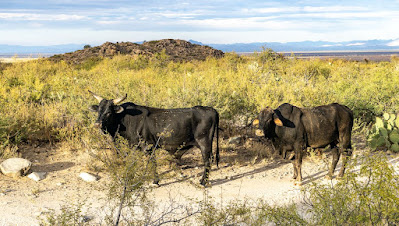 A bit later, I caught a glimpse of pink alpenglow to the east and took a look to the west.  What I saw would have me rushing up the rocks next to the campsite and managing to catch this portion of the sunset: 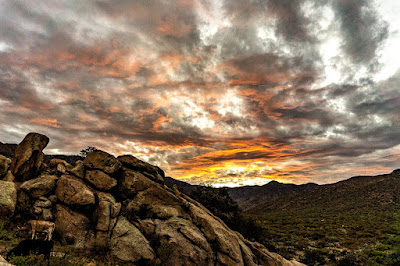 Note the cows grazing in the lower left hand corner.
Posted by redlegsrides at 7:23 PM

That last sunset shot is gorgeous.

Thanks CCjon, that means a lot.