We displaced via RV to the Pony Express RV Park about four miles north of the BMW Rally held in the state fairgrounds in Salt Lake City yesterday.

After work, RichardM (who's attending the rally) came by the RV and we then met up with Ry of the Two Wheels to There blog for a meet/greet and ride.

Ry led us via surface streets, in the sweltering early evening heat, to a nice Vietnamese diner where we had a nice chat and sandwiches.  Lots of veggies in those Bahn Min? sandwiches, probably healthy for me.

After eating, Ry lead us to the Big Cottonwood Canyon road which twisted and turned their way upwards and into blessedly much cooler conditions.  The road led us past the Solitude Resort and we eventually ended up on top of Guardsman Pass.

Quite the view from there, you can see to the east the valley where Park City is located.  You could use this road to get past the big mountains that form a wall to the east of SLC I suppose. 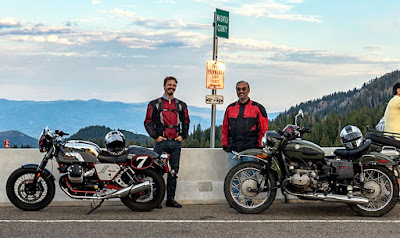 Ry, knowing my penchant for sunset shots, had timed things so that we were at Guardsman Pass at the right time to catch the sunset on the side of the road, just shy of the pass summit. 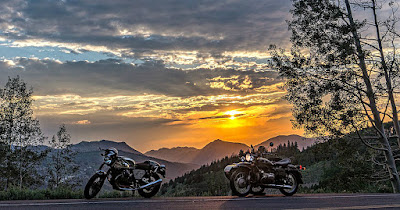 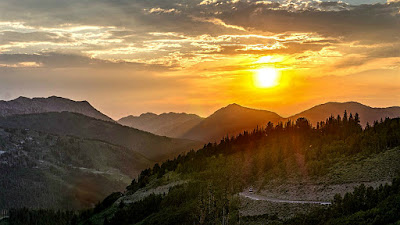 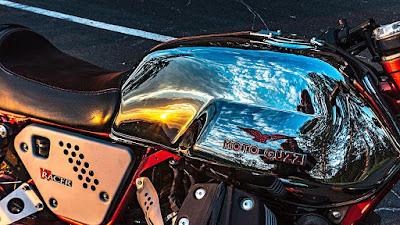 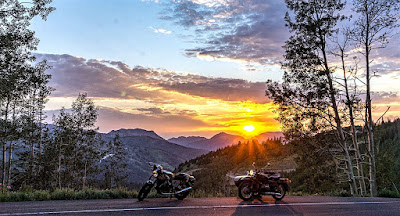 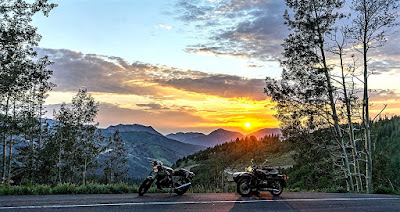 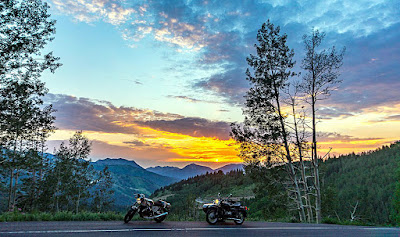 and now behind the distant mountains

We stuck around a bit longer hoping for last minute illumination by the sun of the overhead clouds but no dice.

We headed back down the mountain/canyon towards SLC and after a brief tour of both the LDS temple and the State Capitol areas, were back at the RV Park by 10:30 PM or so.  No pics, we just cruised by these sights.

Thanks Ry for the tour!  Very good to meet you in person!

Note: we saw a low of 61 degrees Fahrenheit on the summit and temperatures in the mid to high 90s in the valley!

Posted by redlegsrides at 11:18 AM

A little rebellious today I see. Re: No Parking sign.

Just a trio of scofflaws!

Richard warned us you would have the sunset photo ... here wasn't wrong. Absolutely stunning Dom.

Ha-haa!... "Trio of scofflaws," huh? I love it! I don't think I could have spent the evening in a better way than grabbing sandwiches and a ride with you and Richard. Oh, and Quick Silver has never looked so good--you are indeed the Sunset Whisperer. ;-)

Now, has this turned into a Guzzi commercial for a change, Dom? The sunset pics with the shiny bike are examplary. And you had a mini blogger meeting, too. Good to see you out there with Ry and Richard.

Great riding with you Ry! Thanks for showing us Guardsman Pass!

A blogger meet up and a sunset tour? Jealous, but in a good way. Awesome sunset pictures too.

Thank you Trobairitz, the riding in the valley you wouldn't have envied....