Did a little bit of riding on Yagi, my TW200, around mid-morning but otherwise pretty much stayed at camp and enjoyed the sunny weather.

Lots of other campers in the area but still none within line of sight of my campsite so it's all good.  It's the weekenders!  Several OHVs running about, disregarding the rule about the county roads being limited to licensed highway vehicles.  Oh well. 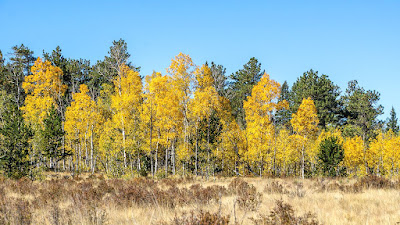 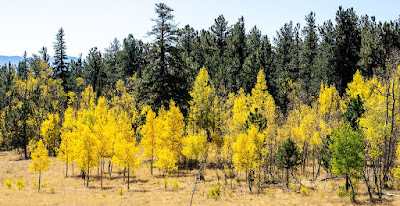 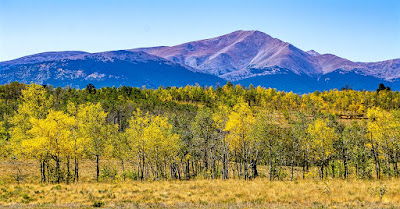 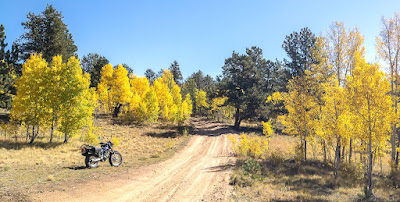 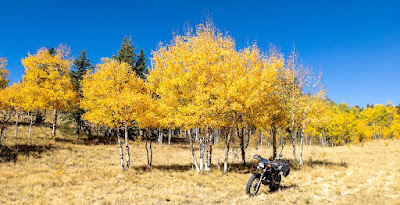 As I wandered the trails I spotted and stopped for what looked like a tupperware container. 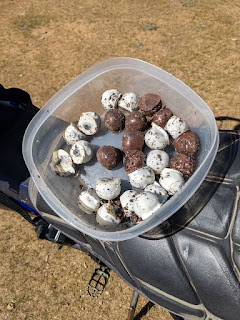 Yummy....
Here's a view of distant mountain peaks, some being the Collegiate Peaks near Buena Vista.  Taken from atop a rock formation near the campsite:

I hung out at the campsite most of the day, trying out the shade RV Awning Sunshade that I'd recently bought.  Works fine on the awning, but ended up putting it away due to the VRRV's orientation, it wasn't needed. 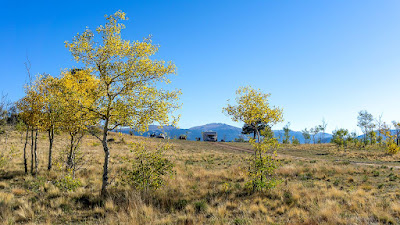 Played around trying it on the left side of the RV, using the mounting bar previously used by the slideout's topper.  It worked fine to attach, but too short, it would have to be at least 15' long instead of the present 9' but not sure I'll pursue it as a shade option for the left side.

In the late afternoon, it was warm enough to go out riding again on Yagi to capture some more Fall Colors: 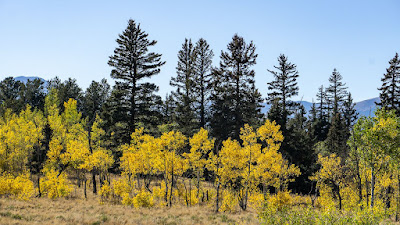 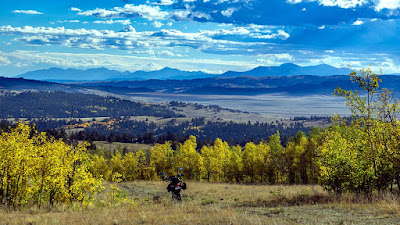 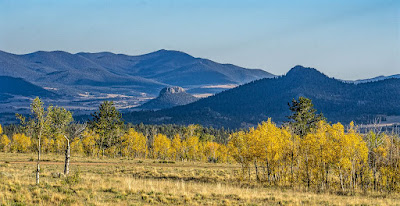 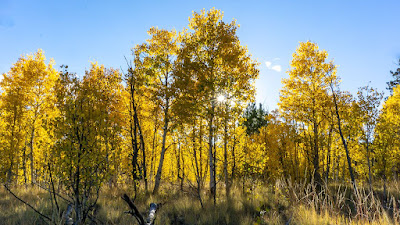 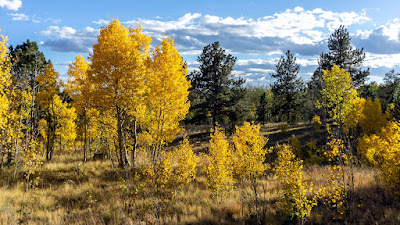 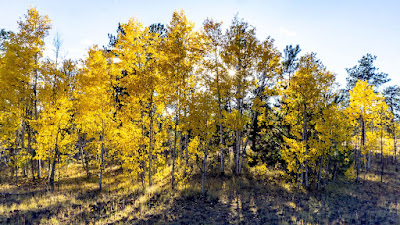 All the amateurs/weekenders have left, I counted only six occupied campsites to the west of me and only two on the ridge to the north of me.  I'll have to see what is to the east of me tomorrow.

Posted by redlegsrides at 7:45 PM

Your boondocking adventures along with the rides you can make from camp are outstanding. A good place for my Royal Enfield Himalayan. Heavier than Yagi but it can probably keep up with you.

Hope all is well.

I really like the sunshade for the awning. Ours has a section that stays on the awning all the time and the longer section zips on. If high winds are forecast, I can easily unzip it and retract the awning.

Am envious. Fall has to be the most beautiful time of the year up there, crisp air, smell of aspen.. hear any elk bugling? Or coyotes singing?

Alls well Steve, just returned from Wisconsin where we said our last goodbyes to my FIL. I'm sure that your Himalaya would do just find out here!

Which photo RichardM? My shade doesn't have a zip-off section and the awning won't roll up with it attached, I tried.

Colorado is quite beautiful during the fall colors season, CCjon, however no critters spotted or heard.... Just a rather large rabbit so far.

Fond memories of autumn in that area and your lovely photos bring them back. Thanks much sir!

Thanks Coop and you're quite welcome.

The header photo is red rock spires with the TW in the foreground.

RichardM, I thought you meant when the new pictures was a header candidate.