These are times that try a man's soul. I was riding home from the auto parts store where I'd gone this afternoon to pick up some turn signal LED bulbs. Coincidentally, my deep cycle battery's charge had gone down to 10.5 volts I noted when I parked Natasha outside the store.

When I came out and tried to fire up the engine with the starter....nothing but the death rattle sound of a depleted battery! No problem, that's why I had the motorcycle battery in the ammo box next to the sidecar! I took the jumper cables out of the tool bag, hooked the batteries to each other and Natasha fired right up!

I then started riding home, smug in seeing my "backup battery" had indeed proven a reliable method to "get me home" when the main battery was depleted. Now I know it's 10.5 volts where it'll have "issues" starting the engine. I figure I'll recharge at the 10.8 volt mark from now on. Results of first "drain it down" charge: Range: 725km or 425 miles, got about 17.7 hrs of "engine on" time so the math is about right for my Ural. About 8 amps/hrs usage. Remember I switched to LED brake lights during this charge cycle so the figures aren't quite accurate.

Now to the title of the post: Less than a mile from my house, as I was starting off from a stop at a traffic light, I heard this awful rattling noise and the motorcycle would not accelerate! I looked down, while in the middle of the intersection, and saw the shaft from my rear wheel's final drive spinning free from where it used to be a part of the propeller shaft going to the sidecar's wheel! Arrggghhh!

I killed the engine, got off and pushed her to the side of the road. I ended up pushing it up a small incline to the nearest neighborhood road and parked her against the curb. Dammit!

I did not have the presence of mind to take pictures. But you'll see below what I was confronted with. I tried to "bind it" together enough to limp home since I was so close but no go. My loving wife brought me materials to try this, and then when it failed, took me home to get my tow strap. Dale, a neighborhood friend, came by and picked me up once we called him. We got Natasha secured with the tow strap and a short while later she was home in the garage. It was quite the ignominious tow ride too, loud banging noises as the two pieces of prop shaft moved with the wheels and banged about the support beams of the sidecar frame.

I called my Russian friend Andre and he rushed right on over! While he drove, I looked up the process to take the prop shaft off the motorcycle and side car. Quite a simple process actually, if you're curious, here's the procedure from Bill Glaser's most excellent site: LINK.

So Andre shows up, said we didn't need the manual it's so simple a job to do. You know what? He was right as always when it comes to Russian machinery. First thing we did was place a jack stand under the sidecar's sub frame. Here's where I learned how easy it is to lift the sidecar! Holy crap, no wonder its easy to "fly the chair" if you don't slow down on right turns! It took very little effort by Andre and me and we had that sidecar up in the air and the jack stand in place! Wow.

Removal of the wheel was simplicity itself, remove the dust cap, pull the cotter pin out from the castellated nut, remove inner dust cover and with the special pin wrench remove the nut securing the wheel to the axle. (all this is in the link above by the way, so no pictures, hell taking pictures would have slown us down!). Wheel off, a block of wood against the short axle and some hammer blows had the short axle separated from the chair's sub frame: 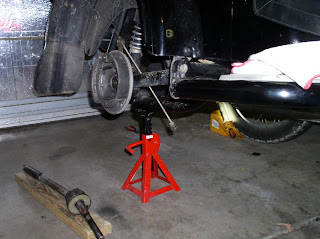 Took us less than ten minutes to remove the wheel and hammer off the short axle! That's the axle to the left of the red jack stand. 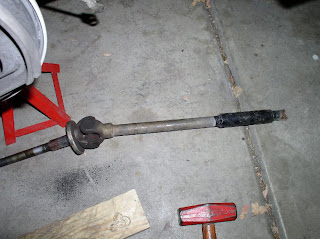 Here's a picture of the short axle (left portion), the black thicker portion of the prop shaft is where it's been repaired before, the break point is to the far right

Here's a picture of the sidecar's wheel hub assembly, the short axle goes through the hole in the center of course, it's got bearings on both sides. 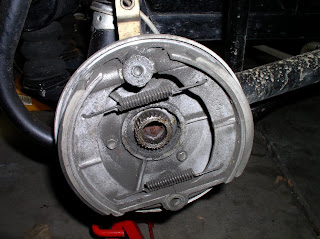 Next, it was time to remove the prop shaft remnant from the final drive u-joint assembly on the motorcycle. We removed the safety wire and two bolts that held the inner u-joint assembly to the tug's final drive. Turns out, we didn't need to to do this so I basically added work for myself! 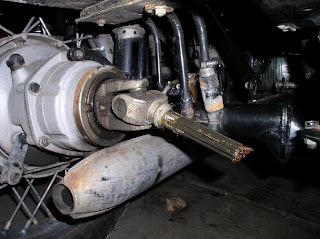 All we really had to do was remove the rubber boot protecting the spot where the prop shaft mater to the final drive U-joint assembly above! Oh well, live and learn. When it comes to re-assembly, I'll have to safety-wire the damn bolts, oh well.

Here's the prop shaft in all it's failed glory: 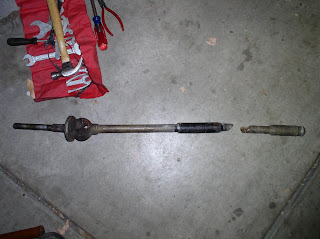 Left side of picture is the short axle where it goes into the sidecar frame mount, right side is the portion that slides onto the geared assembly leading to the u-joint mating to the tug's final drive. 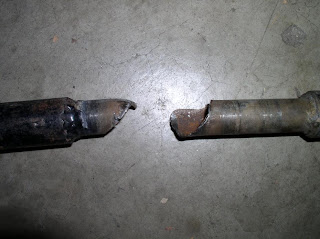 Here's a closeup look at where the prop shaft sheared apart.

I called up Wagner's Cycle and Felicia commiserated with me and agreed with Andre's solution to this problem. Get a larger inner diameter piece of piece of pipe and sleeve it over the broken section.

You'll note in the picture above that apparently this prop shaft had broken before and had been repaired in this manner! Well, Andre recommends cutting off the previously repaired portion as well as today's damaged portion and weld on a stronger, thicker piece of pipe. I am inclined to go this route. Andre is going to call his friend to see if he can do the welding on Monday. I am going to explore other routes as well.

Andre says it's basically rust buildup inside the pipe that caused the deterioration and eventual failure of the prop shaft. Take a look: 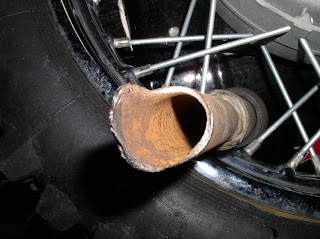 Quite rusty inside, you can see possibly the nice bright metal edges where the damaged occurred today, we could see the rest of the edges where the rust had eaten away at the metal.

Andre wanted me to make this recommendation to all Ural owners. To prevent rust buildup inside your prop shaft, drill a small hole into it, spray WD-40 into it so it keeps rust from forming from water created by condensation. Use a small rubber plug to keep the oil in. Then you won't have to worry about your prop shaft coming apart as mine did! Note: Felicia of Wagners Cycle mentioned these prop shaft usually get damaged by people "flying the chair" or hitting a curb.

The motorcycling gods were again watching over me, my loving wife reminded me. What if this prop shaft had split apart while I was out riding around the sticks this morning! What if it had happened while I was going up and down Pikes Peak last weekend!

Oh well, another RPOC event in my ownership experience of a Russian Sidecar Motorcycle. No one hurt, eminently fixable and not very difficult to put it all back together. I am going to miss riding in the snow that's forecasted for tomorrow though dammit. Sure, I could remove the u-joint assemblies from both ends and ride in single-wheel drive but there's a chance of getting contaminants into the exposed assemblies, not worth the risk!
Posted by redlegsrides at 6:23 PM

Pretty amazing break and there must have been a lot of stress on the drive shaft even with the rust. I am amazed at the small diameter of the shaft especially being a hollow tube. I would consider having a drive shaft shop make you one using much larger diameter tubing with about the same wall thickness welded to the solid material used at each end. Or, if clearance is a problem, using solid material instead of a tube. Especially since this is more like a axle half-shaft than a drive shaft. i.e. much more torque.

Thank you for sharing your experience.

You've really had all the issues one can have with a side car rig. But I like the way through all of this you continue to press on. Is there any more work you can do to prevent any more surprises?

man, your not having much luck!!
Take that shaft to a shop that does car drive shafts and they'll fix you up..

Richard, yeah, makes you kind of wonder why they didn't design it "beefier", or perhaps its designed as the "weak point" so that it'll break first rather than destroy the gears at each end perhaps? I am definitely thinking of not only sleeving around the break but putting a solid core inside if possible. Thanks for the advice.

Mike: well, I can either press on and learn more about living with a Ural or quit. I think I'll press on. As to other preventive actions, who knows. I sure didn't expect the shaft to break!

Fattkaw, yeah, my luck seems rather bad but if you think about it, at least its happening near home and not up some desolate goat trail or up Pikes Peak or somewhere where help can't get to me easily!

Wow. That's really quite a snap! I'm vaguely worried about this sort of thing with our Tourist, since it's from 1995.

Kelsey, yeah, Felicia of Wagner's Cycle mentioned its not an uncommon occurrence. It can happen, as I mentioned in the posting, by just hitting a curb just right. All I can say is if you live in a humid climate where condensation is a problem, you may want to consider Andre's recommendation.

Thankfully, we have a Tourist, so no sidecar driveshaft for us!

I'd suggest considering replacing the weak hollow tubing with solid.

Allen, ah if only that were a choice....or is it? Hmmm, worth looking into while I ride on the hopefully long term fix that I'll get done this week hopefully.

BTW, Natasha is ridable again....I missed the big snow but still got some riding in the white stuff today after the temporary repairs.....

Oh man, more problems?! I hope you really enjoy all this when you tell the stories years from now. It's all about the stories, right?

Ken...yeah, my stories of the ural will be something like this: no shit, there I was at 14,000 ft on Pikes Peak, riding in knee deep snow, and the damn prop shaft shears off as I was rounding an increasing radius right hand turn at over 45mph....suddenly in front of me was Jack Riepe on his K75 beemer, stopped in the middle of the road watching a pole dancer in a parka doing her thing along the side of the road....