Boondocking in the Pike NF: Day 7 and 8

Not much activity today, a couple of the group members readied themselves to return home.

John and Gary would leave us in the afternoon, both of them taking Mount Herman Road as the quickest way off of Rampart Range and onto the I-25 corridor.

Before they left, a group picture of all the Revival Attendees: 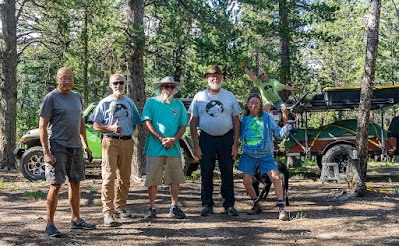 Me, John, Jerry, Rich, Mary and Gary on his trailer

It would be a dark and stormy evening, with rain and thunder and lightning to keep everyone in their tent or RV!

By 11AM, Rich and Mary & Jerry had packed up their vehicles and departed the Revival Site, saying goodbye to me again as they headed to Rampart Range Road.

I had thought to stay till Monday but decided to beat the forecasted rain storm home.  Got everything ready and was home by 3PM or so.

I had a nice time at my first Revival, can't believe the group has been doing it for 48 years!  Apparently, the number of attendees was much larger at times, but as with all things, the numbers have dwindled.

Here's a pic of Spat aka John, from Friday night I believe, he was watching the sunset (or lack thereof) from this position on Falcon Rock: 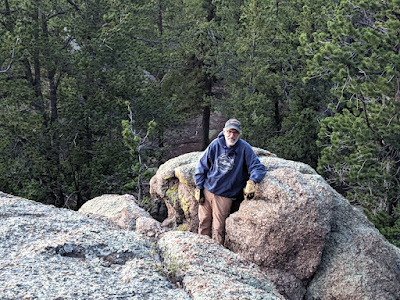 The trip there and back was also a good test of the cover I'm now going to be using to protect the Sammy's windshield from rocks and such while its being towed: 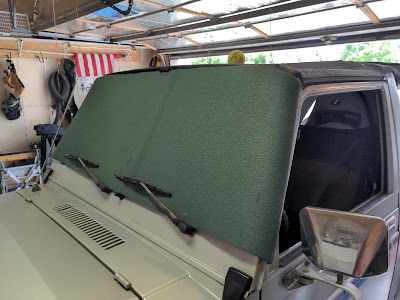 Last but definitely not least in several categories, a couple shots of Gary's tent trailer rig.  He says it's a work in progress as he refines how things are stored/deployed. 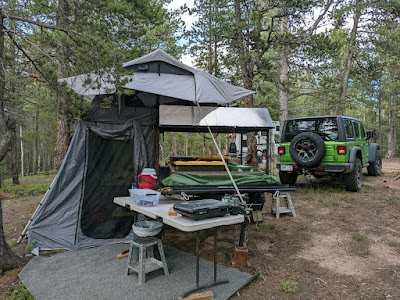 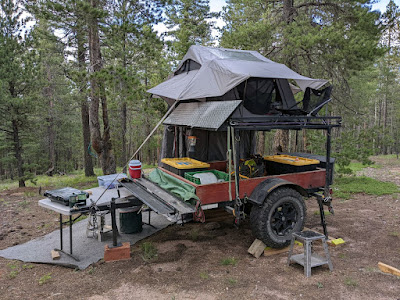 Posted by redlegsrides at 7:54 PM

Cool trailer with a rooftop tent. Pretty small gathering, kind of like the sidecar one in AK…

Those camp trailers are right up my alley, I love the simplicity.

RichardM, apparently at the height of popularity over 200 people would show up for these events.

SonjaM, I found the trailer quite interesting... He's still working on the system but it seems like a lot of work too.

So many questions, where to start...
The windshield protector, what material is that? What is to keep it from flying off?

CCjon, he's got a telescoping ladder that attaches on right side of trailer, storage vestibule tent underneath for storage.

The windshield cover is an old army sleeping foam mat, it's sides are secured by the Sammy's doors being shut and thereby clamping down on parts of it.

How'd I miss the last Revival blog. Thanks for the group shot Dom. 200 or half a dozen attendees doesn't matter it's always fun. I'm sure you have been invited before glad you came this year. My Ural was worked hard and not real happy on departure, coming down Mt Herman rd rough but with no ruts it was coming back to a good and happier spot, me too. I got some of your rain north of Palmer Lake rd 105. After the rain cleared the Ural started running even better. A good shower for me and a bath for the Patrol the next day all is good. See ya next year - Spat

Glad the Ural started running better after it quit raining! Had fun at the Revival as well!