Boondocking in the Pike National Forest

Martha pointed out to me that I'd been around people since the beginning of June, and probably needed some alone time to recharge my batteries.

So, I drove the VRRV, towing the Sammy (testing windshield protection mat) to Woodland Park west of Colorado Springs.  From there you can access the southern portion of Rampart Range Road.

Once you're off the paved portion, it's about 9 miles or so to Forest Road 32x of the Pike National Forest, off of Rampart Range Road.  I got a nice spot just off the start of FR32x, about a mile from the campsite for The Revival.

What's The Revival you ask?  It's a gathering of motorcycle-minded people apparently, which has been going on at the same location and time (full moon in August) for decades.  I've not attended before, but I know some of the guys who will attend so it should be all good. 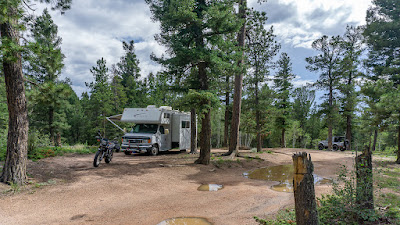 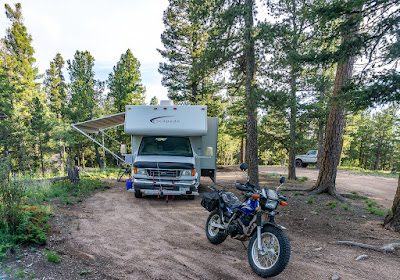 Near sunset, I drove what turned out to be 13 miles to the big rock point hoping to pose the Sammy on the rock again with the sun setting in the background.
Alas, the angles are not right, so here's just the sun as it set:

Posted by redlegsrides at 9:32 PM

Looks like you found a good spot to set up. Enjoy the quiet.

Looks like a nice, quiet spot and you did find a colorful sunset. I tried taking a time-lapse of the sunset at Medina Lake (less) but I think I hit the button twice since the resulting video was one frame...

RichardM, it's not bad at all, found a better one a mile south that I might try after the Revival is over.