An Attempt at Pike Peak's Summit by James and I

James Peet is a friend of mine from my college ROTC days.  He was a junior cadet MS2 when I was in the MS4 or final phase of ROTC training.

We kept in irregular contact, mostly through Facebook and such over the years.  He's presently on the Colorado portion of the TransAmerica Trail  or T.A.T on a 2022 Himalaya motorcycle.

I saw he'd reported in via FB on his travels as he made his way from the eastern start point of the TAT; and on Thursday of this week, saw he was in Florence, CO.  About 2.5 hours from me!

I messaged him via FB messenger and we soon coordinated a meet/ride at the fee station at Pikes Peak for Friday.

We got together at around 1130 and soon afterwards were riding up the mountain.

Here's a couple of shots of his motorcycle, it's a Thumper with just 411 cc of power so 55 MPH is basically it in terms of performance.  Since the TAT consists of back country roads and dirt when possible, this is not an issue. 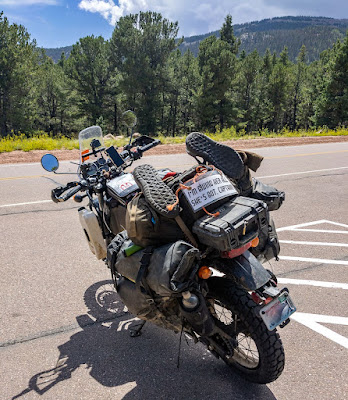 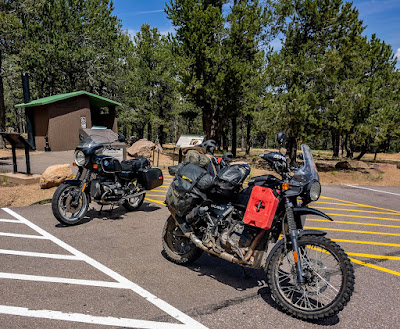 As we got closer to MM 15, we stopped at the lodge and James donned wet weather gear as it was starting to rain.  The clouds looked pretty nasty further up the mountain and he didn't want to get too cold.  I'd forgotten my gear in the RV so resigned myself for some cold.
Once ready, we motored on with James in the lead.  As we neared MM 16, there was a Park Ranger waving him over.  After a few seconds, James turned around and we parked the motorcycles a short distance away from the ranger.
Turns out, weather conditions were "not great" up top, with steady rain and some hail in the mix.  So they were closing down the road to uphill traffic until at least 2PM.  So, instead of standing around in light rain for at least 45 minutes, we motored on back to the lodge for food.
The roads were wet and the switchbacks were taken with due care by both of us.  I was leading this time so I could get him to stop at picture taking spots on the way down. 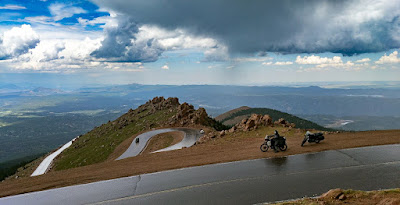 A view of the Rock Pile and part of the switchbacks 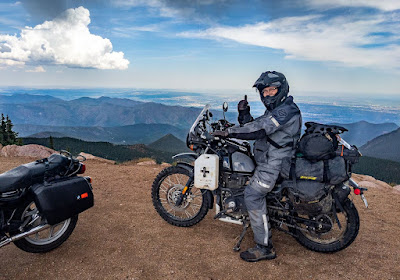 James P. at the Rock Pile, that's Colorado Springs
in the distance I think.
We had some very expensive burger/fries and chili at the lodge then when we exited, saw these skies: 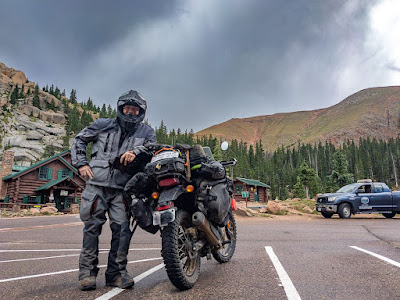 A talk with the ranger at the brake check point was not encouraging and so James and I decided to bag any further attempt to make it to the top of Pikes Peak.  MM16 would have to be our highest point achieved today.
The ride back down the mountain was uneventful, so was the transit of Colorado Springs and riding on CO Hwy 83 through Parker and from there, home.
Here's James motorcycle as he worked to unpack things so he could do some laundry and such tasks while staying overnight as our guest.

Much wine was imbibed by the two of us, and in the morning, James packed up his stuff back onto the motorcycle.  He's going to resume the TAT at Salida.  Due to other issues, there's gaps in his TAT routing, but as he said, he's not out to prove anything, just have some fun riding the TAT. 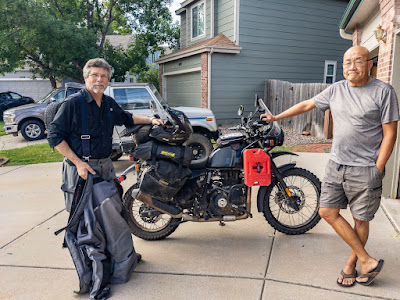 James and I before he left Saturday Morning.
Wishing James safe travels and no more droppings of his motorcycle as he continues westward.
Brigitta did fine, by the way, no issues.  She needed the exercise so it all worked out for all involved.
BTW, James Peet is a published author of science fiction, cooking and is working on an article about riding the TAT.  I've read part of his Corps of Discovery Series and do recommend them to anyone who likes science fiction and the idea of alternate Earths and their exploration.  Amazon link to Book 1 of the series:  LINK  (No, I don't get an Amazon affiliate incentive payment, I just like his books).

Posted by redlegsrides at 5:41 PM

I don't like Facebook, but it is an excellent tool to stay in touch with childhood friends. Great pictures.

Thanks Kofla, it's about the only good thing about FB, helping track friends.

Sleet already! Fairbanks already had its first frost. And, I'll take a look at his books.

Only around 14k feet RichardM....but still, enough to convince James to turn around.