Circumnavigating the Ajo Peaks and T'Dub'ing to Bates Well Ranch

A-10s overflew my campsite, a couple of them pretty low.  Of course, by the time I got my camera they were higher up.  I think they were transiting towards Area B or C of the Barry Goldwater AF Range. 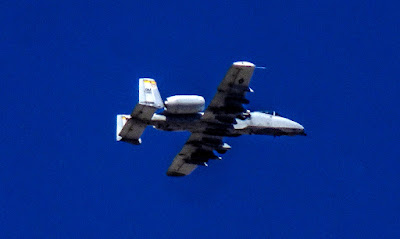 I rode out in the late afternoon to get a side shot of Locomotive Rock from about a mile away.  I still don't see the locomotive, do you? 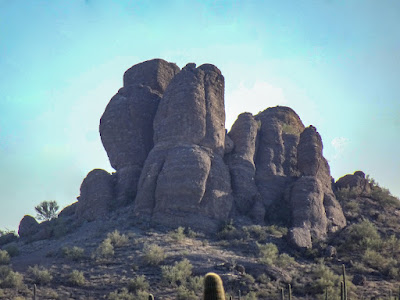 March 15, Tuesday.
So, two major rock formations visible for miles around.  Ajo Peak and North Ajo Peak.  This morning, I rode out at 8:00 AM to see how close I could get to the base of North Ajo Peak.
Turns out, there's a trail that basically goes around it, comprised of Trail 8113H and F I believe.  There were a couple of times I had to turn around due to a trail petering out so don't hold me to the numbers. 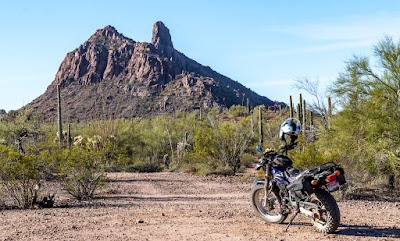 A view of Ajo Peak from base of North Ajo Peak 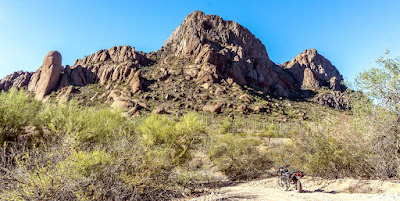 The other side of North Ajo Peak 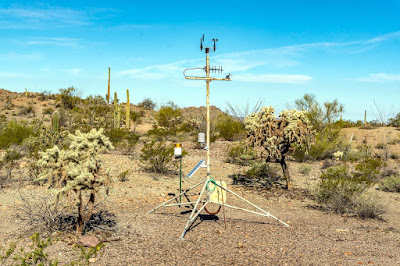 When I saw this weather station, I realized I'd been
on this trail before....with the Sammy.  (Trail 8113F)
Trail 8113F is also where there's a big dip with big ruts and technical terrain which tested the Sammy's clearances back then.  It slowed Yagi some as well, but due to my lack of skills mostly. 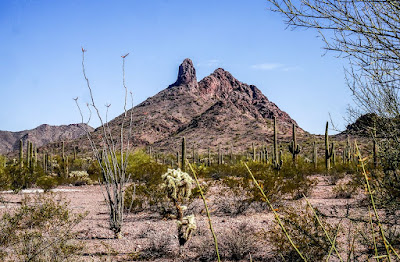 Now back on Scenic Loop Road with Ajo Peak in background 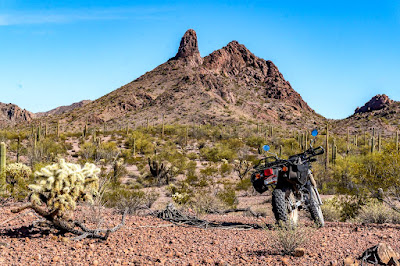 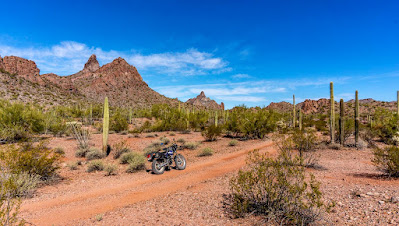 Ajo Peak is closer, with North Ajo Peak in the distance 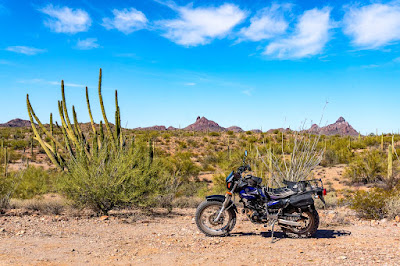 A distant view of both Ajo and North Ajo Peaks
from near the campsite
Wednesday, March 16
Today I woke to an outside temperature of 52°F (11°C)!  It was nice.  No need to fire up the heater!
After breakfast, I got on Yagi to do what I thought would be a short ride to check out Bates Well Road.  It leads south from the campsite and I figured I'd go perhaps 4-5 miles just to see.  As it was going to be a short ride, I left my wallet at home.
Well, I spotted this interesting rock formation before long, way in the distance and I thought it was near Why, AZ.  So I kept on going.  It's also known as BLM Road 8114 and its actually nicely graded for the most part.  There were large tanker trucks going back and forth, apparently carrying water from a well near the campsite to a spot at Bates Well Ranch.
Where I could, I would detour off of 8114 to explore side roads, all the while, continuing in a southerly direction to the aforementioned rock formations. 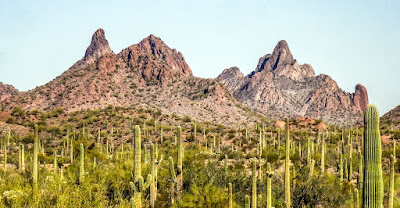 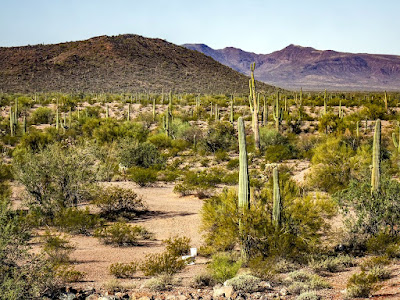 Something in the picture doesn't belong....
On one trail, I spotted what appeared to have been a painted rock near what looked like a large excavation/ditch.

The rock wasn't painted, it (I believe) has copper elements in its composition and the copper had "tarnished" in the open air.  Much like the roofs of buildings that are sheathed in copper you see. 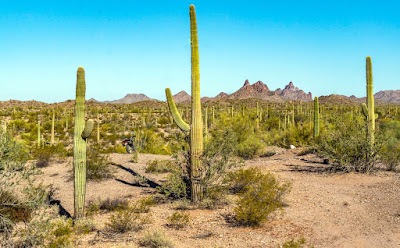 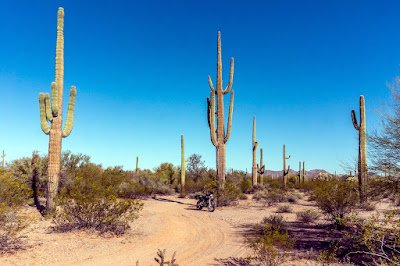 I liked the look of the cactus in the middle.
I made it to Bates Well Ranch with no issues, there wasn't much to see there, but here's the highlights: 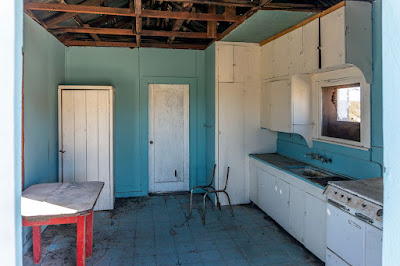 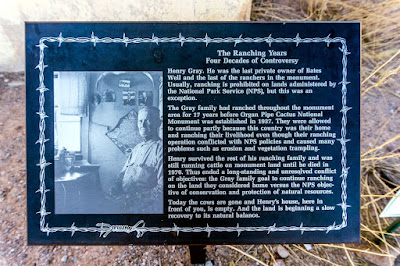 Somewhat away from the house above, were the remnants of a cattle corral, a shed and what looks like new construction of a cabin.  Perhaps the NPS is restoring something which had fallen apart?  No sure.
So, the rock formations I'd spied from a distance?  This is as close as I got and really, didn't get the good angle on the main rock that had caught my eye.  The light at this point in the morning was quite flat.
The rocks are actually in the Organ Pipe Cactus National Monument, so further south than Why, AZ. 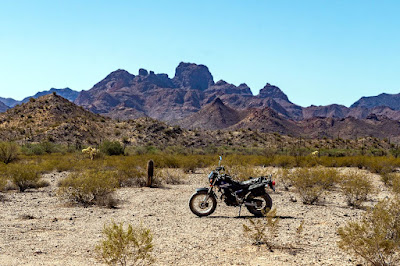 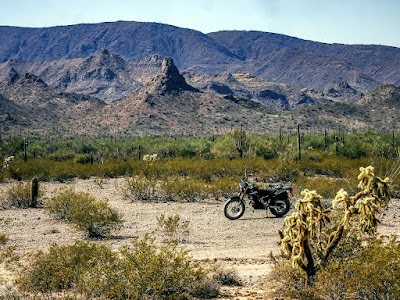 As I retraced my way back north out of the monument, I caught sight of a blue flag flapping in the wind.  Curious, I rode up to it and saw this: 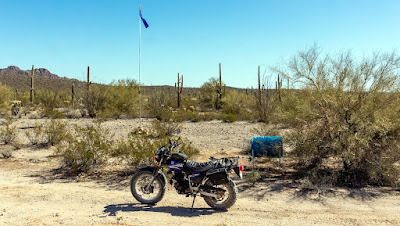 Apparently, a water source put there by some Samaritan group, for use by illegal immigrants as they trek through the desert.  Nearby, was one of those towers put up by the Border Patrol, on which one can summon aid.
Back on Bates Well Road heading north, I could see the distant hazy profile of Montezumas Head and thought it was perhaps 2-3 miles to US Hwy 85.  I was thinking I'd get gas in Why, you see.
Finally located a trail branching off of 8114 that seemed to go in the right direction.  It would have me crisscrossing the valley, through ravines and dry creek beds, long patches of sand and almost 14 miles later, I got to the back side of Gunsight BLM area!  Definitely, not a shortcut to Why.
Got to the gas station and then remembered I'd left my wallet at home.  Dammit.
Still, at 83 miles I still hadn't had to cut over to reserve so I headed out of Why towards Ajo.  The road was chock full of impatient asshole drivers going north away from Rocky Point/Puerto Peñasco in Sonora, Mexico.
One guy, after I'd turned onto Darby Well road blared his horn at me, even though before the turn I'd been going 55 mph in a 55 zone.  I gave him the finger and thought: "FYYFF".   Hopefully he got a ticket while speeding through the town of Ajo.
That pleasant reminder of how most people are disappointing aside, I made it back to camp just fine and filled up both Yagi and Scarlett with the remaining gas in the spare tanks.  I'll be making a run into Ajo this weekend to pay $5/gallon!
Posted by redlegsrides at 3:33 PM