Just a record of some of the work done on the Sammy these last couple of weeks.

The passenger side manual locking hub had gotten more and more difficult to turn from the Free to Lock position and back to Free.  Turned out the actual dial mechanism was in need of some oil lubrication.  The insides were clean and still lightly greased.  Cleaned off the old grease and applied new coat and re-assembled.

After rigging a downstream overflow bottle for the coolant reservoir, I tracked over several drives, the temperatures at several points on the Sammy's engine to ascertain baseline figures when things seem to be running within cooling specifications.

I also have quite taking said fluid from the overflow bottle and putting it back into the radiator.  The stock reservoir you see, remains at the full mark, so I know there's coolant that can be drawn back into the radiator as needed.  So far, after three separate drives, all coolant levels remain stable.

Here's the points on the engine I'm monitoring with a touchless thermometer each time I stop and park after driving it for at least 5 miles and having seen the temperature gauge on the dash panel stabilize in the middle of the gauge's range.

Note: Image source is partsouq.com, I removed some items from their diagrams to clearly show where the measurement points are located. 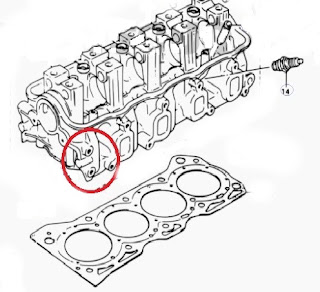 The two empty bolt holes on the left forward edge of the cylinder head.
Average: 177°F (highest: 190°F)for upper hole
Average: 222°F (highest:234°F) for lower hole.
The gasket you see above is the head gasket which I'll be eventually replacing. 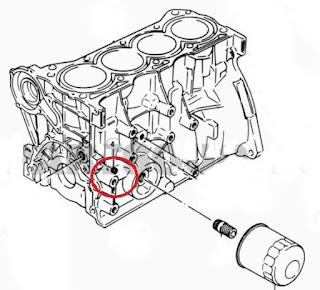 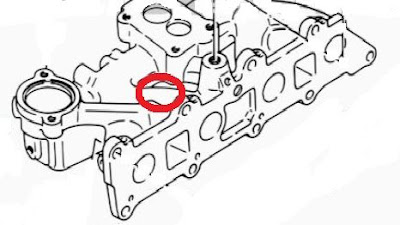 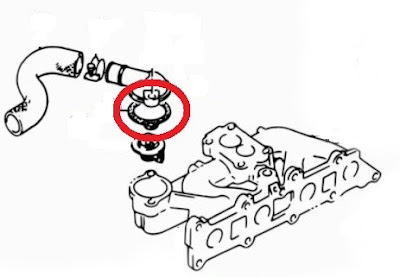 Defrost Vent: No air flowing from driver side vent

Last couple of times I'd actually felt like turning on the heater on in the Sammy and setting it to defrost the windshield; I'd noticed no air flow on the driver side.  Not good as ice would form of course.  Each time it had happened I'd had to wipe things down with a paper towel.

Today, I got around to seeing where the problem was, it turned out to be a simple issue:  The feed tube from the heater up to the vent had been knocked off somehow: 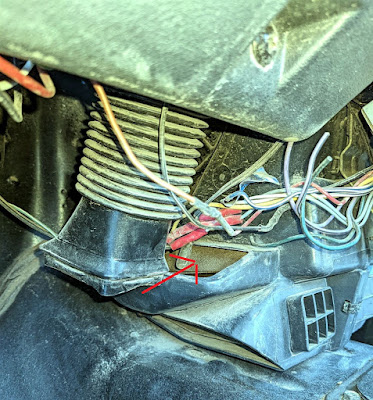 So glad it was an easy fix.....I'd started the diagnosis thinking of how I'd have to contort my body to get at things behind the dashboard!  Someday I've got to trace and tidy up the mess of wires you see.  I believe most are involved with the radio.
Posted by redlegsrides at 1:35 PM