Martha and I drove the Sammy the 30 miles or so distance, across the state border into Arkansas to check out a couple of tourist destinations in Fort Smith.

Fort Smith is apparently Arkansas' second largest city, it's downtown area, fronted by Garrison Street is replete with historic-looking buildings, giving it a small town feel, at least in that area.  The rest of what we saw of the city was quite "commercial/industrial".

We tried the Fort Smith National Monument Visitor Center but it was closed due to repairs, burst pipes apparently had caused the loss of the entire floor.  The only thing available was "The Gallows", where Hanging Judge Parker presided over many hangings, issued by his court. 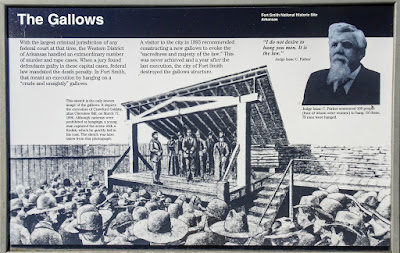 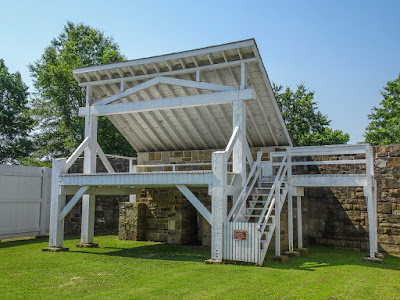 We then walked across to the Fort Smith History Museum which was not only open but air-conditioned! 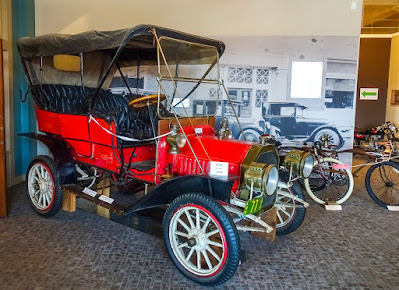 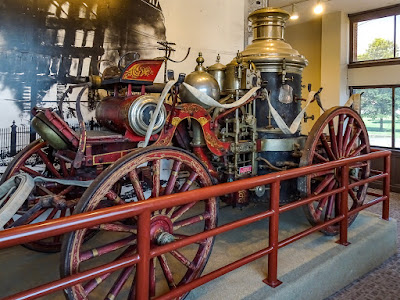 Really vintage Fire Engine
Kind of like Will Rogers is Oklahoma's favorite son, the town of Fort Smith has its own favorite son, Brigadier General William Orlando Darby, of Darby's Rangers fame: 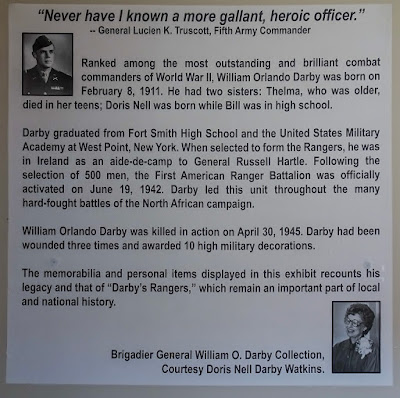 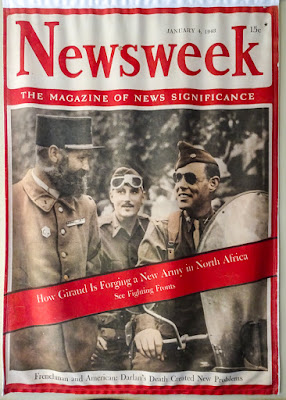 Darby's Rangers were the forerunners of today's US Army Ranger Battalions, they go into the toughest situations such as enemy airfields, fight and establish control so regular army units and sometimes even Airborne Infantry units can land safely into enemy held areas.  That's just one of the missions and they're part of the Special Operations community in the US military.  I like to describe them as the Army's shock troops...
The rest of the museum had your standard memorabilia, mostly related in some way to Fort Smith or its inhabitants.  This BMW motorcycle wasn't documented that I could see, perhaps it was owned by someone important within the Fort Smith community. 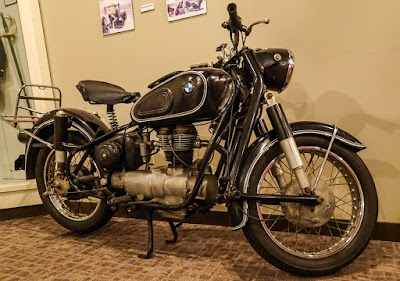 Martha spotted the white nurse's uniform in the display case and commented it looked very similar to her own nurse uniform when she was on active duty with the Army. 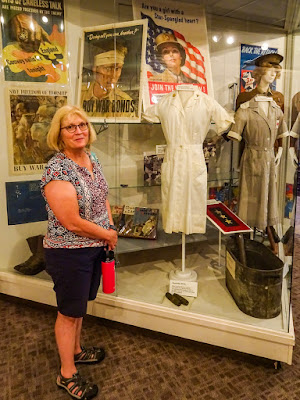 An old time indoor phone booth, I wonder who Martha thought she'd be able to call? 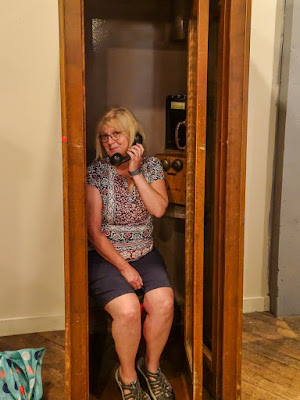 There were old time electronics such as radios, TVs and broadcast equipment for both on display.  The below "copier" though however, I'd never seen or heard of.... 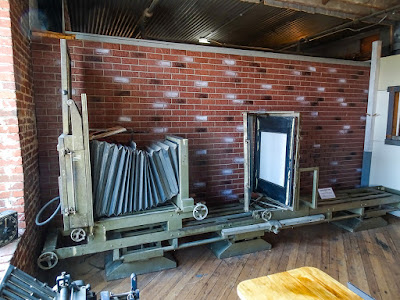 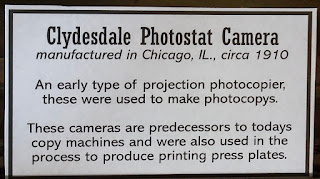 In the museum lobby, hangs this vintage picture of the building containing the museum these days.  As you can see, it's fill other roles in its history: 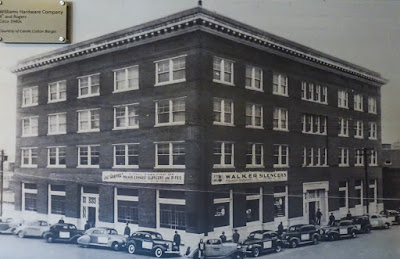 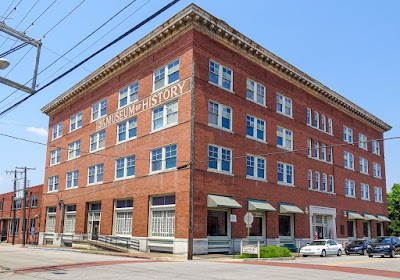 Another then and now pairing:  This photo was on display in the museum gift shop and I was able to find the building as it stands today. 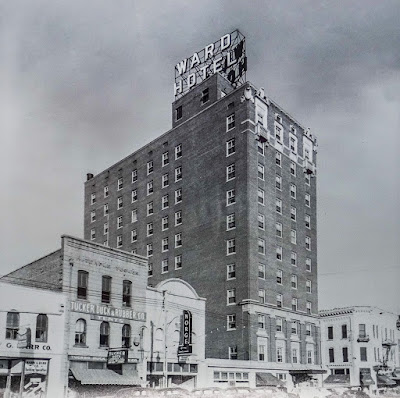 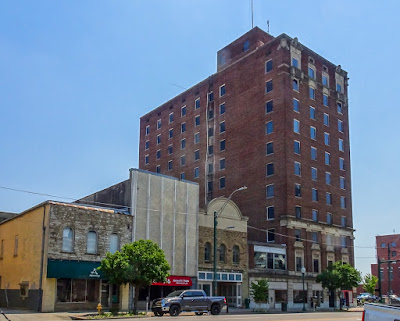 Despite the heat and humidity, Martha had us go to the nearby statue of the "Biker General" as described in the website RoadsideAmerica.  It's Brigadier General Darby of course! 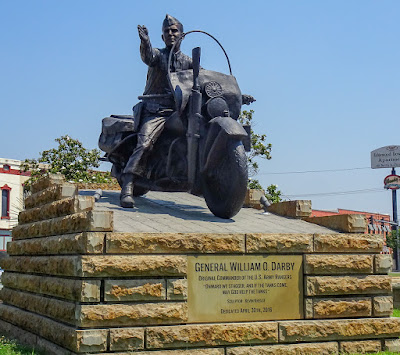 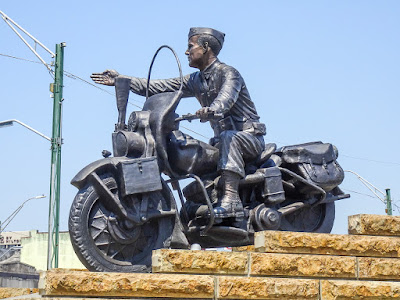 Finally, to get a brief respite from the heat again, we visited Miss Laura's Visitor Center/Social Club, formerly a fancy brothel in Fort Smith. 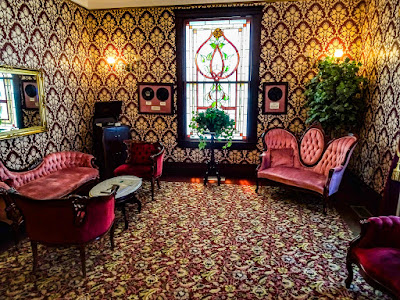 Not a bad waiting area eh?  There were a couple of them actually
and then there was also a Bar Area! 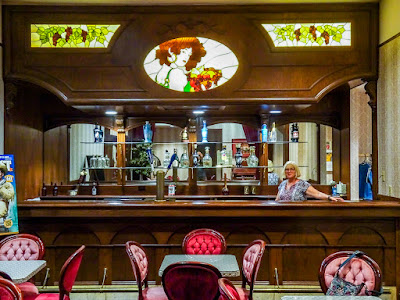 Martha plays the role of sultry bartender at Miss Laura's Social Club
The upstairs rooms were just bedrooms (go figure) and they were mostly all shut as the displays within are still being worked on we were told.
Here's a stained glass window of a couple of "soiled doves".... 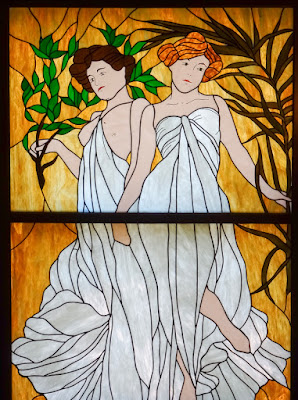 Once again exiting into the now even more oppressive heat, we got a quick lunch at Braum's Ice Cream and Fast Food shop and then headed on back to the campsite.
It felt very good changing into swim wear and then dousing our bodies under the cooling water of the outdoor shower hose!  Once all the sweat was washed away, we entered the VRRV which had been cooling this whole time with the air conditioner running on high! 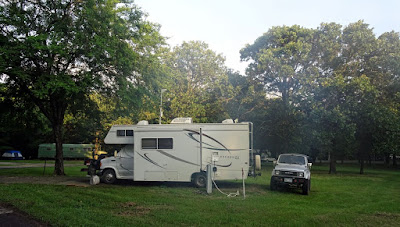 That's not smoke you see in the air, it's condensation on the lens!
Spot #40 Short Mountain Cove Recreation Area
We'll be moving to a different spot tomorrow, even though we're cutting this stay short by one day, it's not because of any glaring defects for our spot in Short Mountain Cove COE.  Sure, it lacks even a minimal amount of signage, the swim area is basically a muddy trashed area and our site lacks shade....but Martha scored a spot for tomorrow which will put us a bit closer to Hot Springs, AR on Sunday.

Posted by redlegsrides at 6:12 PM