Eastward, Ho! Day 11 & 12: An eye-related scare and the Will Rogers Museum

Last night, Martha had some issues with what she thought were an allergic reaction to pollen or something around the campsite/lake.  Woke up feeling fine though so we went ahead and drove the Sammy over to Bartlesville to meet up with Andy and Rhonda G. to tour the Woolarc Wildlife Preserve, a legacy of Frank Phillips of Phillips Oil fame.

On the way there, Martha started feeling worse and worse in terms of pain in the eyes, so after meeting up with Andy and Rhonda, we made our apologies and hurried over to a nearby Urgent Care facility.  Martha was given a numbing agent for the pain (which wore off very quickly I must day) and a steroid shot for what was diagnosed as a strong allergic reaction.

We then headed over to the local Walmart to get some antibiotics in case an infection developed.  Martha was not feeling well at all and was experiencing extreme sensitivity to light as well!  Once we got the antibiotics we hurried on back to the campsite so Martha could get some rest inside the darkened VRRV.

She would end up feeling much better later on after some rest and the steroid shot having taken effect, fortunately.  The plan is to confirm things are OK with an eye doctor tomorrow in the town of Claremore, OK where we also plan to tour the Will Rogers Museum.

As Martha rested, I was outside and saw another visit by the neighborhood Great Heron: 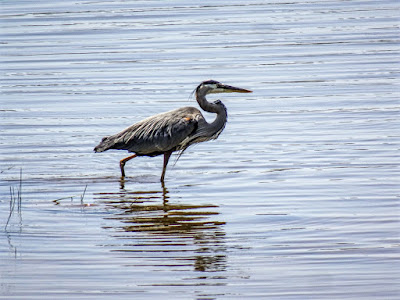 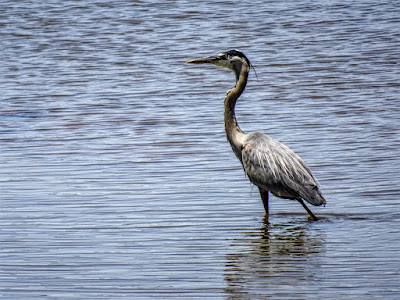 The girls next door then decided to once again walk towards the Great Heron, causing it to take flight again.... 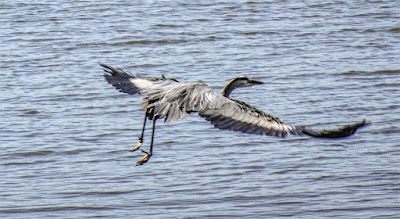 Some people.....
Here's tonight's sunset for our last night here at Birch Cove: 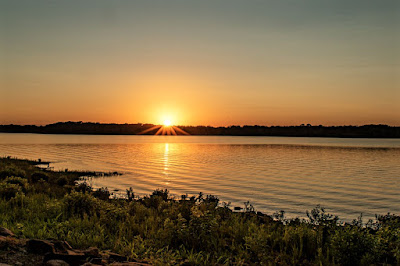 Thursday, June 17
We left the lovely camping spot in the Birch Cove COE Campground and drove SE towards Claremore and the Will Rogers Museum.
First though, Martha went to see an optometrist and her eyes are fine, mainly a case of Eye Dryness with some allergy thrown in.  She's much better now, no need for further steroids or worry.
The Will Rogers Museum is very nice, impressive facilities and very well laid out.  Admission is only $7, $5 for military/veterans.  There were a couple of school groups in the building but it was large enough to enable me to avoid them.  It was otherwise not very crowded.
The life and times of Will Rogers, Oklahoma's Favorite Son, actor, radio personality, comedian, vaudevillian and beloved commentator is detailed using mostly photographs, paintings and printed media.  Here's some of the stuff that caught my eye, by no means even close to what's on display: 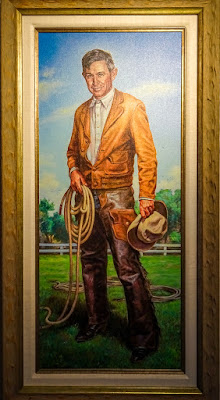 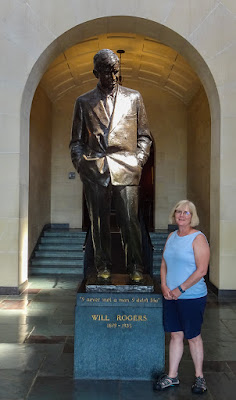 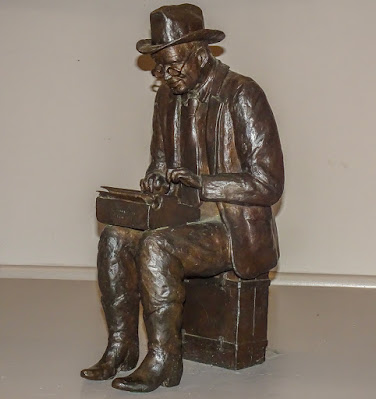 I can picture him using a laptop.... 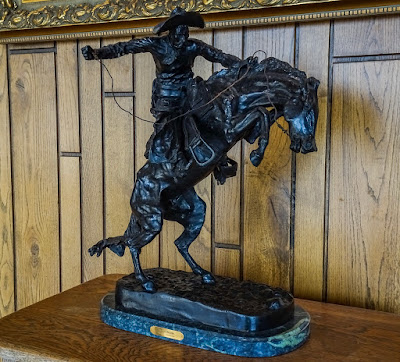 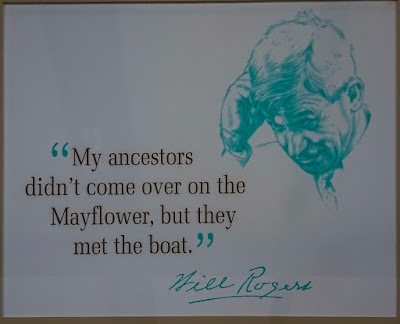 Will was part Cherokee Indian
I liked the dioramas depicting scenes of his life, here he is, typing away at an article for publishing while working as an actor in the movie: Connecticut Yankee. 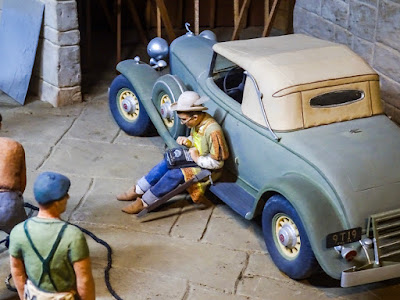 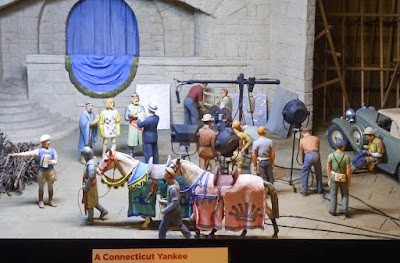 Here, he's broadcasting on the radio for the first time: 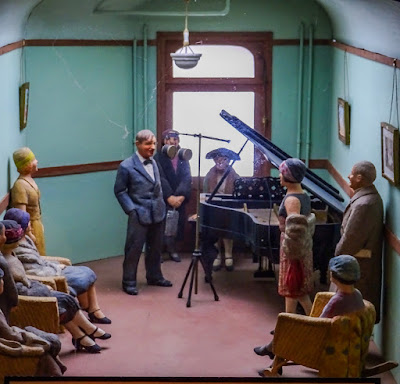 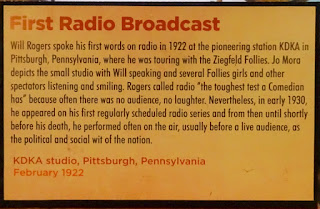 Unfortunately, the country lost Will Rogers, along with flying ace Wiley Post.  Their airplane crashed while near Point Barrow, Alaska: 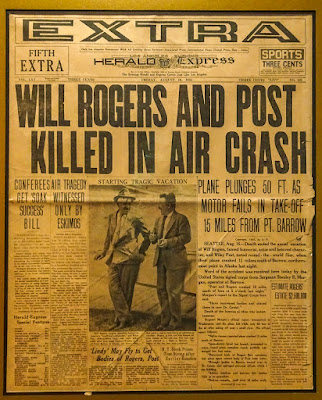 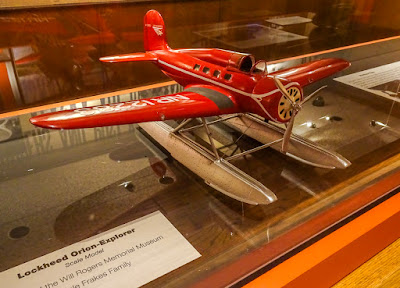 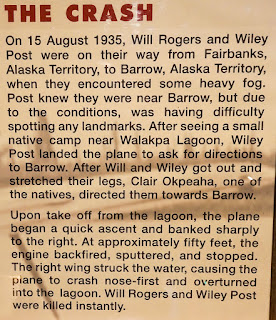 A painting based on a photo taken before their final flight: 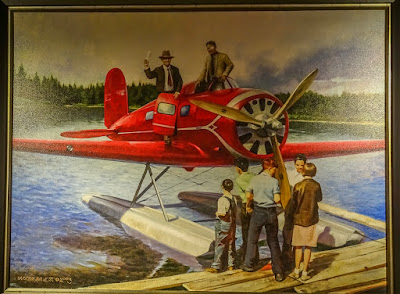 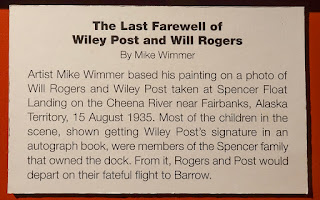 Will Rogers is buried in the Memorial Area, of which the museum is a part.  He, his wife and kids, are together: 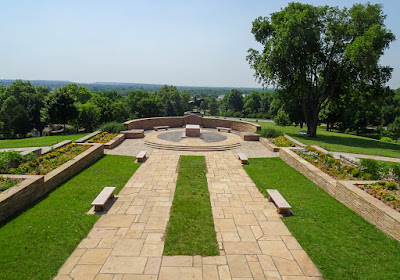 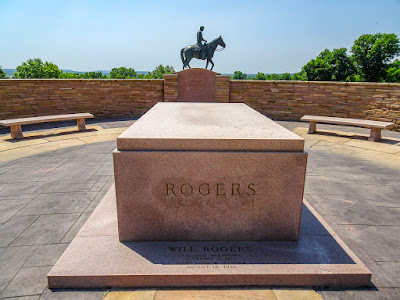 After the museum, it was the doctor appointment for Martha which I talked about before; then it was on to the campground for the next few nights:  Short Mountain Cove, another COE site, this one along the mighty Arkansas River.

The site itself wasn't as great as our last site but it'll do.  It's got power and water, not much shade and no swim beach area but for $10/night, not bad.  We'll be exploring nearby Fort Smith (Arkansas' second largest city) I think and just generally relaxing.

Posted by redlegsrides at 8:43 PM

They weren't that far from Barrow when they crashed. I have a picture of the original memorial at the crash site. The memorial was moved as the ocean was getting close to the site.

Phew, glad to hear that Martha's eye issues have been resolved. This is always scary.

Thanks for the info RichardM.

SonjaM, yes, quite a relief!