Spent a lot of the last two days riding about what are now very familiar to me routes.

It was a joy to reconfirm, that riding off road in sometimes very rocky terrain, with the lower air pressures in Yagi's tires felt much more sure-footed.  Not that she hadn't been before but she's even more so now, in spite of my lack of skills.

First was a ride to check out road conditions on the way to the Baboquivari Trail Head area.  I wouldn't end up going all the way to the trail head mind you, just enough to ascertain conditions. 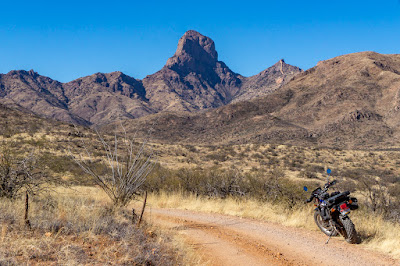 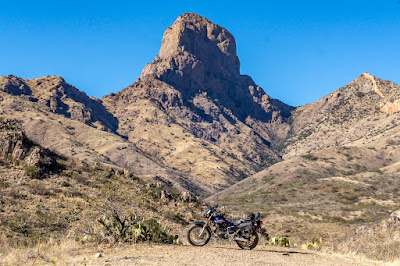 The above pic is the closest point I reached with Yagi before the trail head.  Trail conditions have worsened since the last time I was here with the Sammy but nothing major for the TW200!
On the way back towards the campsite, I stopped at this large water tank: 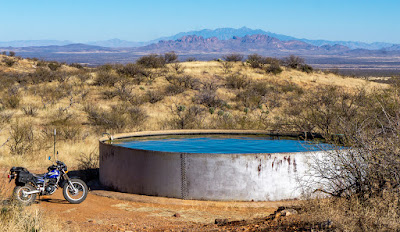 You see the closer formation of rocks in the distance?  That's where I headed next with Yagi.
I rode for several miles, winding along FR 235, 228, 2000, not much to report in terms of scenery and trying to get closer to the mountains above.  Finally, the afternoon was closing down so I stopped here for a picture:

I retraced my route, easily guided by the sight of Baboquivari Peak looming tall in the west.
Once I returned to camp, I realized that the cap had gone missing from the tool tube I carry mounted to the cargo rack on Yagi!  The folding tripod I carried in said tool tube was missing as well.  Damn it. 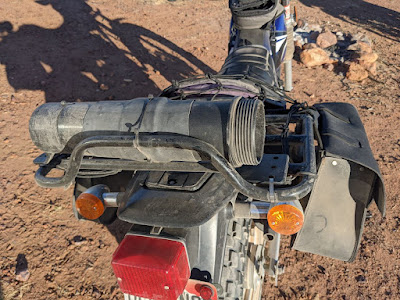 So I hurriedly retraced my route, long story short, I didn't find either the cap or the tripod.  I did find part of the tripod, the head portion on the way to Baboquivari but that was it that evening.
Today, spent the morning again retracing my riding yesterday but no luck.  Fortunately it was an "expendable" tripod from Amazon; and I've got another one ordered already.  More annoying is the loss of the tool tube's cap since buying another one involves having to buy an entire tool tube.  I may forego that cargo method since it appears "faulty".
Today was sunny but not as warm as I'd like it to be, high temps were only in the 50s.  It's supposed to get over 60 degrees tomorrow so here's hoping!

Posted by redlegsrides at 6:44 PM

Those tool tubes seem to be popular but never seemed very secure when mounted to a rack. They see a lot of vibration. Maybe a rubber o-ring at the base of the threads would help hold the cap in place.

Yeah I do t believe it had a rubber o-ring, RichardM, probably would have helped. If I ever get another one, I'll dummy cord the cap onto the bikem