No riding today to speak of, spent most of the day changing out the oil and cleaning the filter on Yagi, my Yamaha TW200.  I'd not packed a new filter you see, but it's coming from home soon and I'll put it in then.  The way Yagi's engine is designed, it looks like I can swap the filter without losing any oil.  I also cleaned and oiled the air filter.

I also replaced the oil in the Harbor Freight Predator 2000 Watt generator along with cleaning out the air filter on it.

By the time the above were complete, it was almost 2 PM and I was tired, so I rested the rest of the day.

Two more oil changes.  First was a ride on Scarlett, about 12 miles or so to the town of Ajo and the Napa Auto Parts store located there.  Got 5w20 oil and a new oil filter for Umarang, the VRRV along with an oil pan to catch the oil.  I'm embarrassed to admit I'd forgotten to replace the oil at the 75K mile interval so it's been 12000 miles since the last oil change!  Bad Dom, bad!  The oil change went well, with only minor spillage.

I also replaced the engine oil on the Onan 4KW onboard generator for the VRRV.  No issues there either and even less spillage involved.  Now I have several containers of used oil to take back to the Napa store for recycling later this week or next.

After lunch and some rest; I decided to ride Yagi, the TW200 to ensure no leaks from the recently opened drain plug or oil filter cover.  I rode her about 10 miles south on AZ 85 for pictures on the road to Alamo Canyon.  There's a small primitive campground there but its sites are too close together in a rather tight cul-de-sac arrangement.  No good cellular signal either! 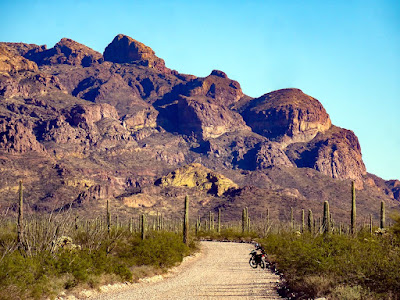 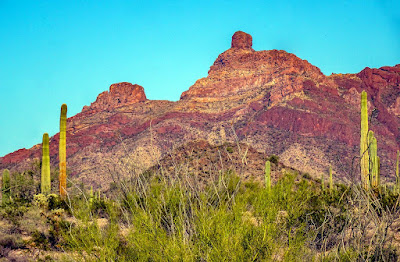 I believe the rock formation up top is called
Montezumas Head

Ran across a mobile version of an Emergency
Aid Summoning Station.  It has a spinning beacon on top
that catches the sun's rays for attention along with a blue
LED light for nighttime visibility. 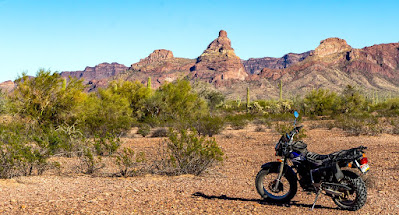 A bit further north, just before the Ajo Mountains
Wayside Stop, another pic of Montezumas Head

The view from the Ajo Mountains Wayside Stop
Returned to camp and just took it easy for the rest of the afternoon/evening.  I made myself a recurring note/reminder on my phone to check for upcoming oil changes; so that I don't miss them as badly as I did the ones for Yagi and Umarang!

Posted by redlegsrides at 10:30 PM

Spectacular pano, Dom. What you are offered for scenery I can return in medieval towns and historical buildings. Yet, sometimes I would like to swap places with you. Cheers from the Heidelberg area, SonjaM

Danke SonjaM! Heidelberg is great but way too many people.... I'll stick with the desert.