How little did I really know about batteries and determining their capacities!

Thanks to RichardM, I think I understand the concepts involved much better now, in order to make better decisions as to power usage, power planning and so on.

It all started with the installation of a new battery monitor, 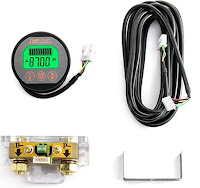 The installation was straightforward and 13 feet of cabling was plenty to be able to mount the display above the VRRV's door. Subsequent testing revealed that what I thought was the house battery's capacity was way too high/optimistic!

After extensive tests, guided by RichardM, we believe the actual battery capacity of the three year old battery has gone from 114 amp hours when new, to roughly 60 amp hours. 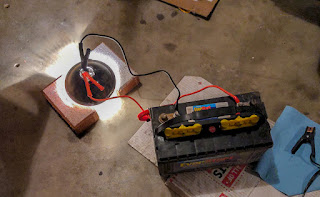 The "load" was the high beam setting on a headlight,
which ranged from a high of 4.9 amps to a low of 4.1 amps 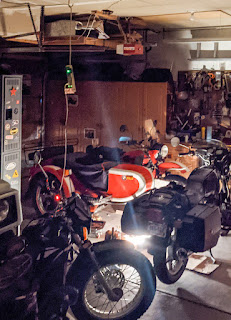 60 amp hours sounds pretty good right? Well, not quite.  You can only discharge a Flooded Lead Acid Battery down to 50% to avoid damaging the battery and shortening its lifespan.  So really, 30 amp hours is the usable capacity.

Note: There were five "load" evolutions, resulting in the 22 amps used.

Basing state of charge or SOC using just voltage is an approximate at best method per RichardM and I believe him.  So once I get the battery charged up again, I'll the set capacity amp hours at 60 ah on the new monitor and see how that works during further testing/usage.

You have to wait till a battery has "rested" or had no load/charge for at least one hour before measuring voltage to get the "true" voltage reading.

Reconditioning batteries is something that should be done every other month or so, I'd not done this at all so the battery paid the price in terms of diminishing capacity.

I had to move the negative cable for the inverter to the new shunt, it had been separate before and thereby its energy draw wasn't monitored!

Recurring discharging of the battery down to or close to 50% also hurt the battery's capacity/performance.

Battery monitoring requires very good and tight connections throughout!  I discovered loose connections as I installed the new monitor, which probably caused the sporadic abnormal readings with the old battery meter.

Due to the design of the new shunt, had to change the connectors on existing battery cables to fit.  I learned that such connectors come with two different hole sizes!  Something to be aware of!

The battery fill system I bought back in January of 2017 works great.  I found the battery cells all topped off during testing. 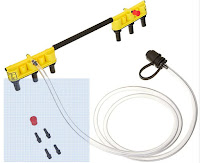 Using a Battery Hydrometer Tester is a good thing to do.  All six cells on the house battery were in the blue range shown below.

My regular power requirements center mainly on running the Dometic Propane Fridge in the VRRV overnight when of course there's no power coming in from the solar panel.  Tests determined it uses about .76 amps/hour to run.  So, 14 hours of no sun-generated power would be roughly 10.6 amp hours.
That would theoretically leave 20 amps or so to power the LED lights in the VRRV and power the fans and water pump during the sunless hours.  So, existing capacity remains satisfactory even though its down by more than half from new.
Note re instructions that came with the Qwork battery monitor.  The translation from Chinese to English was "lacking precision and clarity" and the font used was ridiculously small!  These factors led me to misunderstand the setting of the "discharge voltage".  RichardM clued me in after several "mysterious to me" events where the battery monitor reported zero ah and zero battery gauge when the voltage clearly showed the battery had plenty of charge left!
Posted by redlegsrides at 11:00 AM

Interesting stuff you are learning. Funny, I just installed a solar panel, controller and a lithium battery in the sidecamper last week. Now am learning what draws, half capacity and more mean.

So far the light has not gone on in my mind... yes, am in the dark.

I owe all my learning to RichardM!