Fall Colors are peaking in the foothills!

Today, I drove my '87 Suzuki Samurai to check out the campsites at the Kelly Dahl Forest Service Campground near Nederland, CO on CO Highway 119; also known as the Peak to Peak Highway.

The Peak to Peak Highway serves as  a link from the I-70 Super Slab to Estes Park and the Rocky Mountain National Park.  It would take me almost 2.5 hours (left home too early and got caught in the morning rush hours traffic), but made it to the campground with no issues.

The sites are small and would be a tight fit for the VRRV.  Note: Sites 1-20 are marked as First Come, First Serve.  After the 10th of the month, the campsites are no longer reservable online via rec.gov but the camp host was unsure when they'd close the campsite for the winter.

I wasn't that impressed with the size of the sites so will really have to really think about using this campsite in the future.

Continuing north on CO 119, I soon came to Magnolia Road which I turned off onto and eventually reached the Winiger Ridge Campground area.  The roads remain pretty tough for low-clearance vehicles and 4WD is definitely required for some of the more technical spots!  Heck, I had to put the Sammy in Low Range for most of the rough portions!

Still, I made it all the way to the end of the FR 529 trail.  Only saw two campsites occupied, tent sites of course as no RV I know off would make it to the designated campsites.

Here's some of the Fall Color I posed the Sammy by on the way back to Magnolia Road: 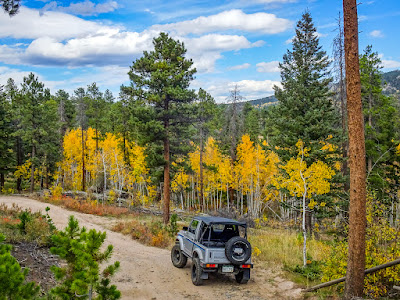 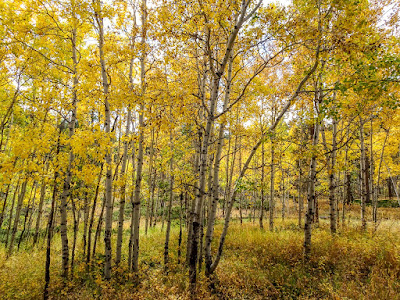 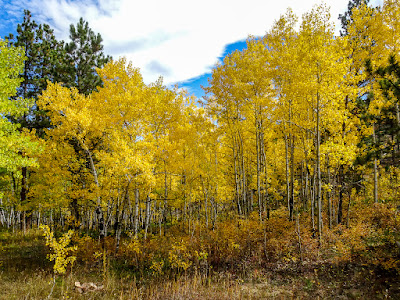 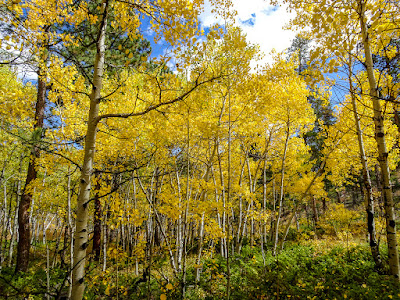 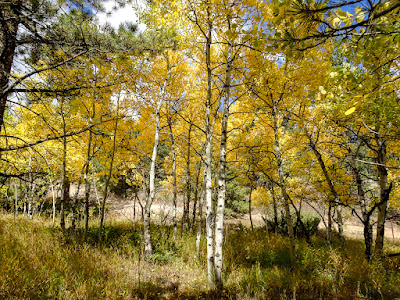 Here's the Fall Color at someone's driveway along Magnolia Road: 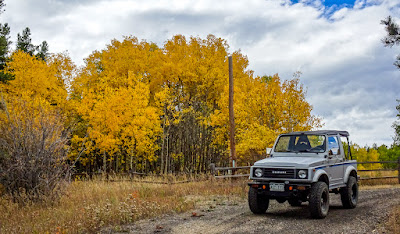 Getting back on CO 119, now heading south, I turned at Rollinsville and headed for Tolland and Rollins Pass.  Here's some of the Fall Colors along the way to the vicinity of the East Portal for the Moffat Railroad tunnel. 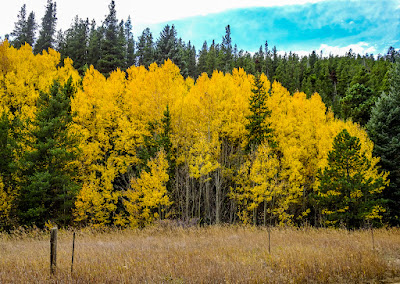 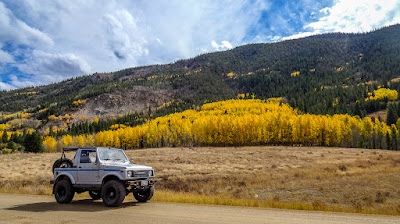 Near the tunnel entrance, I elected to instead head up Rollins Pass Road and about a mile of bumpy rocks and boulders, stopped at the second pull out to see the view: 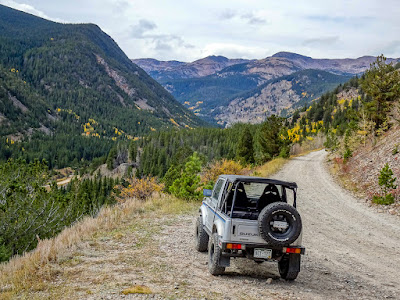 Continuing back down now, I stopped for pictures as shown below and at the first turnout parking spot: 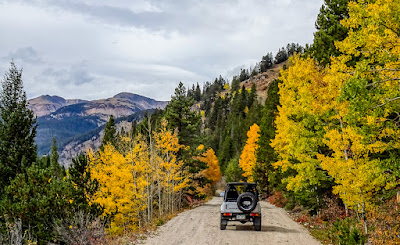 You can see the railroad tracks heading towards the East Portal of the Moffat Railroad Tunnel: I made it back down with no issues and checked out the tunnel entrance.  No pics, it was obscured by construction equipment and supplies.  Apparently, they're doing concrete repairs within the tunnel until sometime this coming December.
I spotted a trail off the main road to the tunnel portal area and turned the Sammy onto it.  It was quite nice and scenic in terms of Fall Colors, all the way to where the trail ended: 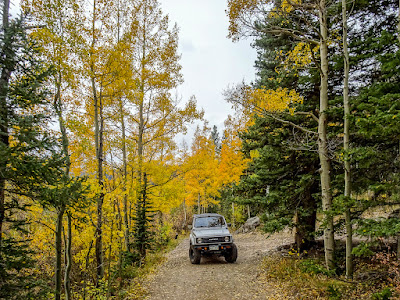 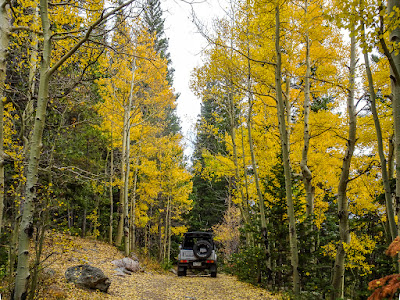 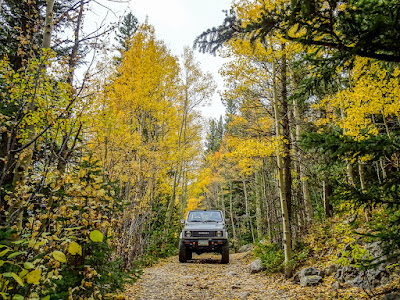 Returning to Rollinsville, I got back onto CO 119 and continued heading south, here's a couple of pics of the great Fall Colors currently peaking along the Peak to Peak Highway.  Too bad the skies had become solidly overcast and blocked the sun's rays from highlighting the leaves on the Aspen. 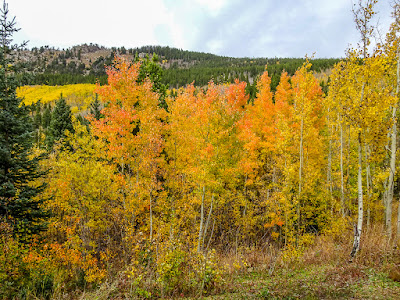 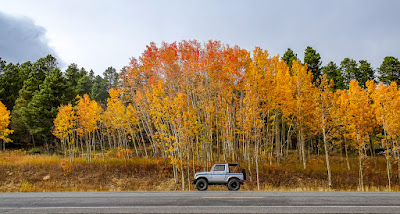 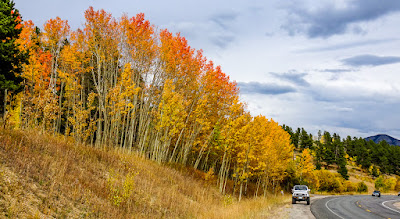 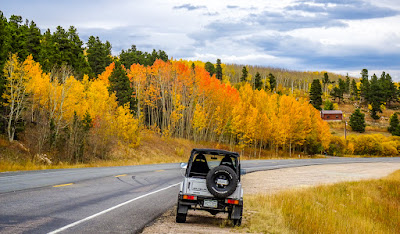 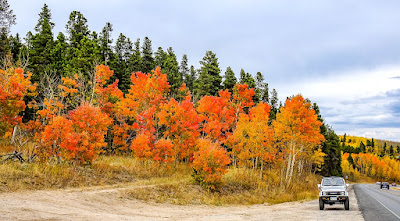 Still, as I hope you agree, the Fall Colors did show up nicely in spite of the lighting conditions.  I wasn't the only one stopping on the side of the highway to take pictures either!
Made it home around 5:30 PM, having gotten caught in the maddening rush hours traffic.  I made a bad decision to use a different route than usual for getting home and paid the price!  Arrgghh.  Still, no issues encountered though I do have to see about further adjustments of the rear brakes on the Sammy.  They could be better I think.

Posted by redlegsrides at 6:42 PM

Great photos! Love the Aspen trees. Hwy 119 is a great road. I enjoy riding it when I am up that way. Never stayed in the Nederland area, but would like to. Very pretty area. Will make note the campsites are small, thanks.

You're welcome Oz, thanks for the comments.

Thanks for sharing the changing leaves with us. We had to leave Sunday just as the leaves were beginning to change in New Mexico, no reds at all.

Very nice leaf colors (if you like yellow). It looks a lot like AK in the fall.

Thanks RichardM, yeah you have to like the color yellow here in this state.

It never gets old to capture the change of colours on the leaves. Lovely pics, Dom.