Boondocking for a couple of days near Penrose, CO

Felt the need to "escape the cesspool" this past weekend so I drove away from the metro area Monday morning and after a couple of "check out" drives to Red Canyon Park and Oil Well Flats BLM (both north of Cañon City, CO that were unsuccessful, ended up at the usual spot within the Penrose Common Use BLM area.

Note:  No cell signal within Red Canyon Park and the roads have gone to shit in several spots leading to the more remote campsites within Oil Well Flats BLM!  Not RV friendly at all!

Been here before, many times.  It's not a bad site for short rides to Skyline Drive, the Royal Gorge and other venues near Cañon City but it's beginning to lose its "charm" due to over-familiarity I think.

After setting up camp, I drove the Sammy to check out the rest of the camping areas, finding only three other campers, two of them looking a bit sketchy but distant from my site so all good.

For instance, there was this abandoned looking wreck of a Class A unit near the entrance to the BLM are:

I thought someone had abandoned it after trying to repair it!  However, I would see a small car the next day, parked next to it with some guy moving about the rig.  Yikes.
Leaving the BLM area, I checked out nearby Brush Hollow Reservoir and also the area beyond it which borders the reservoir.

The temperatures got down into the low to mid 40s overnight, not too bad but then the winds came.
Tuesday, Oct 12
Windy and overcast most of the day!  No fun outdoors so instead I went to a local auto parts salvage yard seeking perhaps parts for the Sammy.
No luck on the Samurai parts but I was surprised by a small "showroom" displaying all sorts of interesting vehicles, automobile-themed toys and motorcycles.  It wasn't a museum, no info plaques anywhere, I think its stuff that someone ended up in the hands of the salvage yard owner over the years.  No price tags either so not for sale perhaps.
A precusor of the three-wheeled rigs one sees on the roads these days, pretty sure its basically a motorcycle with a shell mounted onto it. 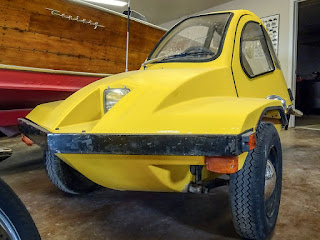 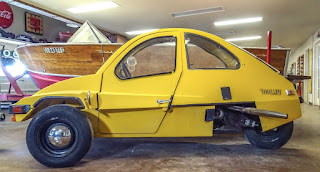 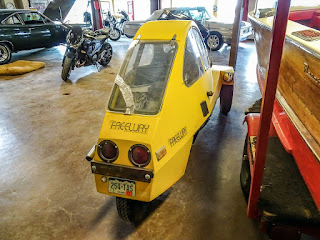 An early version of the Ural Sidecar Rig, it was 1WD but otherwise looked pretty good.  No leading link on the front wheel and of course the mandatory oil pan to catch oil leaks! 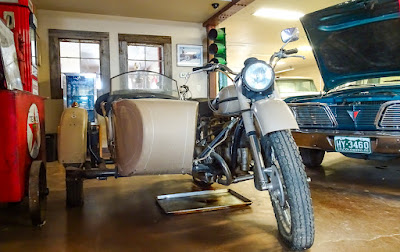 I'm guessing this is a vintage model from the Jeep folks? 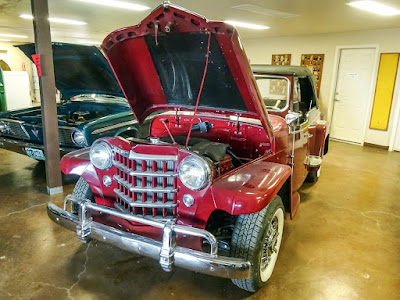 Lots of automobile-related memorabilia on the walls, a sprinkling of vintage motorcycles and several other cars. 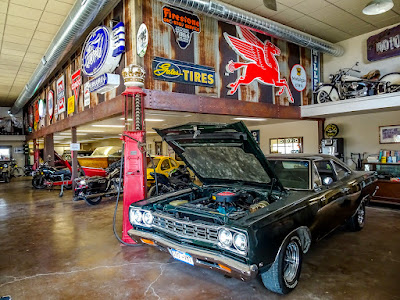 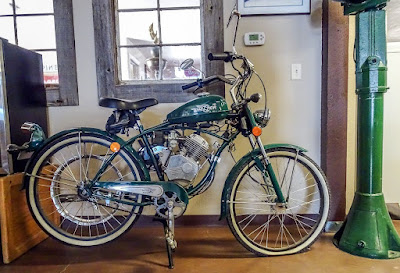 This was one of two pegboards displaying different spark plugs.  I'd not realized how diverse and varied spark plugs had come in! 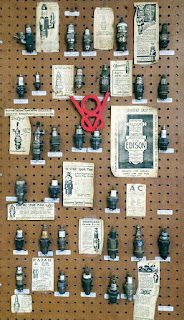 Leaving the auto salvage yard, I headed on to the Vietnam War Memorial Park nearby, it's located near the intersection of US50 and CO 67 Highway.

F-4 Phantom, a former pilot joked that the Phantom was
proof that with enough thrust, even a brick could fly! 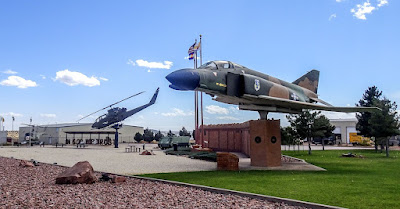 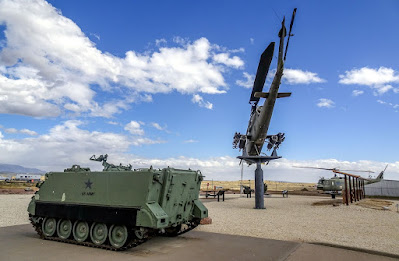 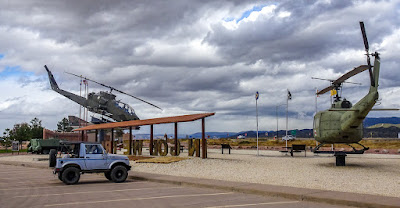 The Sammy facing the Bell UH-1 Iroquois Helicopter
better known as the Huey
Returned to camp as the weather and winds worsened, ended up hunkering down through another cold night.
Wednesday, Oct 13.
Woke to windy conditions which made the temperatures in the low 50s seem to be colder!  Decided to break camp and came home.  I guess the time for camping in tolerably cool weather in Colorado has come to an end for this year!

Posted by redlegsrides at 4:12 PM

Richardm, yep.... Got a couple of VA appointments to get through first, so it won't be heading out till early November at the earliest.

Those abandoned RV's can fool you. Can't be too careful around other people's stuff. Funny what some think ia valuable.

So heading to Tucson in November?

CCjon, current "plan" is to head west through Utah and explore the SW corner of Nevada, then perhaps head S/SE into AZ....

That's the plan SonjaM, but first West to Nevada.