Decided to give Brigitta, my '87 BMW R80 Airhead, a good exercise day.  We'd end up covering a bit over 160 miles of city/highway riding, including some miles of sandy dirt roads which she and I hated.  She's definitely a street motorcycle.

Still, managed to get to, wander around, and return from the Paint Mines Interpretive Park near Calhan, CO without dropping her (came close a couple of times due to deeper than expected sand piles) so I ended up calling it a good day.

Temperatures would "soar" into the high 60s and feel quite warm while hiking about the park but would feel quite cool while riding due to the wind chill factor of course.

Instead of parking in the main parking lot, I ended up parking at the Overlook parking lot which is seemingly closer to the main rock formations.

The picture below shows the main section of colorful rock formation, the overlook parking lot is located above it, but you really have to hike in to view the rocks up close.

The paint mines were where Native Americans traveled to in order to get the colors shown for their use.  Here's a link to the park's website for more info:  LINK
There were more people there than I expected, apparently Friday is included in "the weekend" crowding as mentioned to me by the sole Park Ranger doing his rounds.  Sadly, the imbeciles who I saw disregarding the rules about "NO Dogs" or "Don't climb on the rocks" were quite in evidence but apparently the ranger didn't see them. 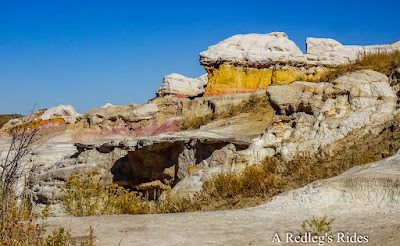 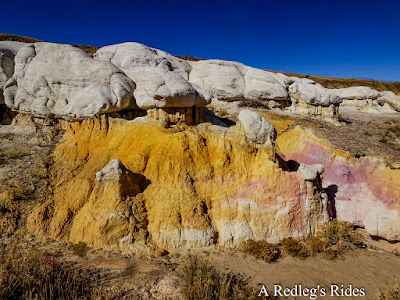 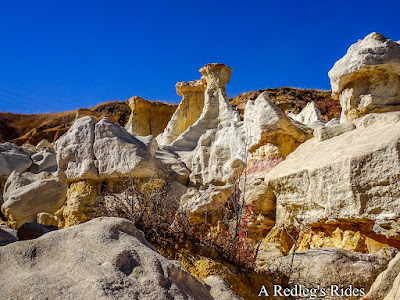 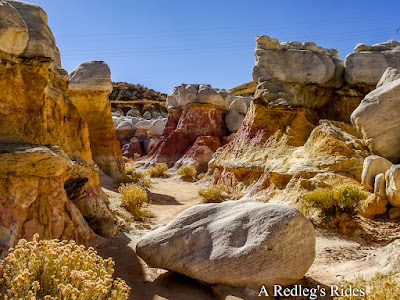 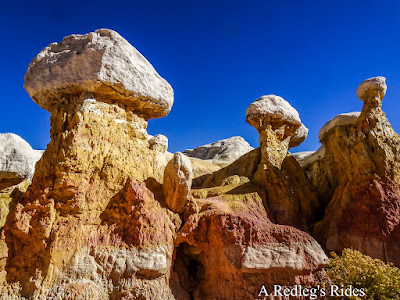 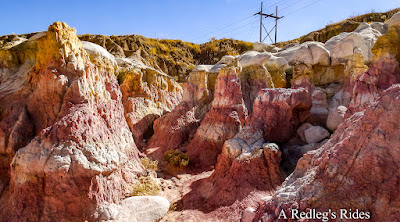 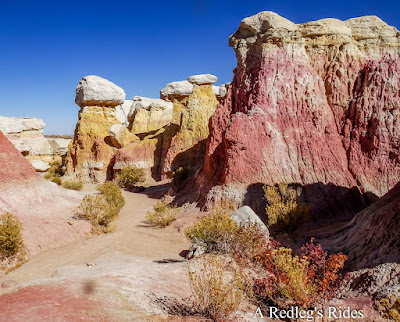 Sorry about the watermarks, didn't want to re-process the pics to remove the watermark.  I'd been experimenting with watermarks for a previous project and forgot to disable it within the Export Process of Adobe Lightroom.
Saturday, October 23 - Fixing some stuff on Scarlett, my 2014 Ural Patrol Sidecar Rig
First was the adjustment of the tug's rear shocks to be fully preloaded on the port side and fully unloaded on the right side.  I also set the shock absorbers on the front wheel to softest or least preload setting.  This to seemingly soften the harsh ride of late, we'll see how that goes.
Second, changing the shocks of course affected slightly the lean-out of the tug so I adjusted the tug inward by one full turn of both upper support bolts.  Now it's under 2 degrees leaned out.  The test ride let me feel like I was leaning less to the left and no increased pulling to the right by the sidecar.
Third, ever since my last camping trip near Poncha Pass, I'd been experiencing the engine cutting out momentarily when hitting big bumps on the road.  I felt it again today while test riding the rig after modifying the shock absorber preloads and resolved to find the issue once and for all.  I had to do some field repairs to the ignition wiring during a ride to Gross Dam near Boulder, CO since then and suspected my work.
Scarlett cut out on me as I rolled her off the driveway so that was motivation to dig into the wiring behind the headlamp immediately!  A lot of shaking/probing of wiring finally led to me finding a bad connection to the bottom fuse in the fuse box!  This fuse is for the fuel pump you see, and its corroded wire connection was causing the loss of power (momentary) when hitting bumps on the road.
I replaced the spade connector and inserted a washer to create a small gap between the connector and the outside fork tube housing which the previous connected had been wedged against.  Again, we'll see how things go, but the test drive afterwards went well.
Posted by redlegsrides at 2:18 PM

What's the logic behind setting the rear shocks differently? Had never heard of that before. Might want to give it a try.

Logic, CCjon? Well, I remind you that sometimes I shouldn't be allowed near tools. :)

Setting both rear shocks to no preload, did indeed soften the ride; but it felt to me that the rig was now too soft on the left side if that makes sense; especially when mounting/dismounting.

With Martha helping me by measuring the travel of the shock with my weight on the outboard peg, we determined that the shock would compress as much as 2 mm more than with full preload....doesn't seem like a lot but subjectively it felt to me enough of a difference.

More riding to be done....though I think Scarlett's days of rough off-road driving are over, especially if the Tdub is available. Martha doesn't want to ride in the sidecar anymore as I've mentioned before so the need to bring the rig along for camping trips is less.

Colourful set of rock formations, reminding me of the badlands in Alberta (Drumheller area and Dinosaur Provincial Park).

Thanks for the info SonjaM.