This weekend has taken a long time going by.....I know, I know, weekends never last long enough for most working folk, but I'm retired you see.

Saturdays was a windy, windy, windy day....thrown in heavily overcast skies and occasional rain and it was basically a day spent in the VRRV!

So, how does one pass the time?   There's reading of books, cleaning, catching up on minor repair jobs involving the solar panels, reorganizing the storage within the VRRV and finally editing digital imagery!

Yep, the major event on Saturday was finding, and modifying a cutaway drawing of a Suzuki Samurai from the cover of a Haynes Car Manual for the same.  I also bought a used version of this manual for future reference. 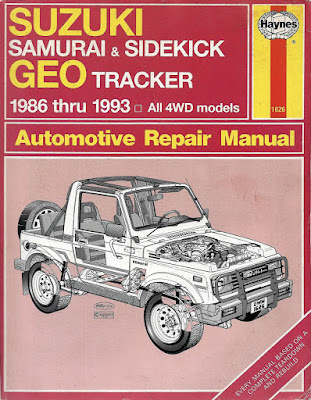 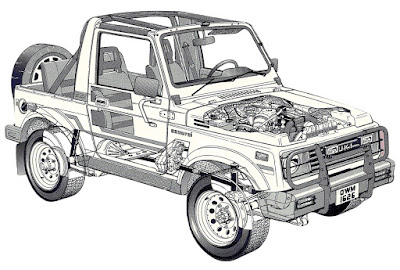 Why you ask?  Perhaps, if I end up keeping the Samurai, I might have a poster sized version of this cutaway drawing for hanging in the garage. 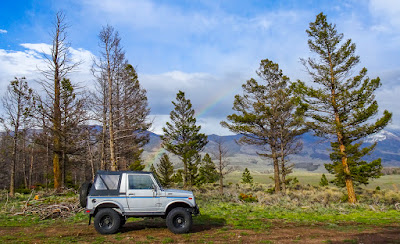 During a very brief window, a rainbow showed itself during
Saturday afternoon.
The crappy weather continued overnight (with periods of heavy rain which woke me) and it would continue through Sunday morning.  Fortunately, the skies cleared sometime in the early afternoon and the sun was able to warm things up a bit, though there was still some windy conditions.
The winds had at times, caused me some worry about whether the nearby trees might fall onto the VRRV....so I displaced it a few feet towards the center of the campsite:

The improving weather made it a prime time to take poor Yagi, my Yamaha TW200 dual sport motorcycle, out for a spin!  Things were still cool enough at this altitude to require a liner under my riding jacket but it was a fun time. 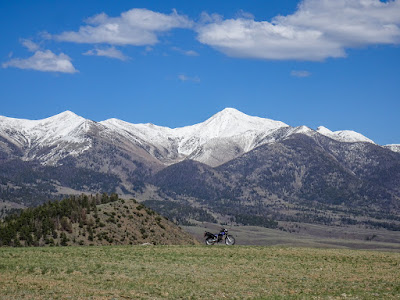 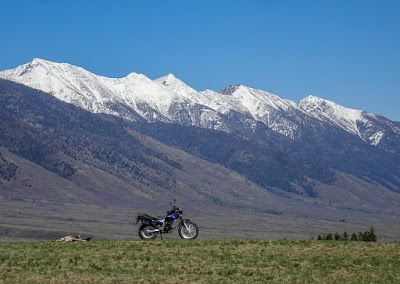 A better view of the entire Sangre de Cristo Range 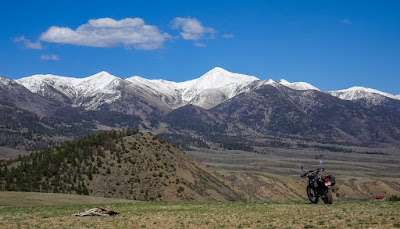 The Collegiate Peaks to the north
Riding Yagi was quite enjoyable and there were less than 4 other campers in the area as I cruised around to see what neighbors I had.  I expect the number will increase as the Memorial Day Weekend approaches.  The next few days are supposed to be mostly sunny and I for one am ready for them!

Posted by redlegsrides at 6:20 PM

Nice job with the graphic! I’ve heard that the area was beautiful.

Thanks CCjon, the initial software used was Microsoft Paint 3D but it would not let me save the results! Warmer weather is indeed forecasted for this area and still below 70 but under sunny skies and 1.7 mi closer to the Sun than at sea level!

Thanks RichardM, The area is really nice and so far has been more or less empty in terms of campers, we shall see come this weekend.

Was it dry enough for Yagi? Any mudding and sliding? Even with the rains and storms, I'm sure the serenity of the area was nice. :)

Conditions were fair for Yogi, things were drying out pretty quickly.