I left the gracious hospitality of my college friends Jerry and Kelly, along with the fun company of my God-Daughter Alexis and her sisters, Chelsea and Brett this morning shortly after 08:30 after a simple breakfast of toast and coffee.

I went south on I-5 to the 205th Street exit, aka the Edmonds-Kingston Ferry exit.  It's a straight shot along this road for a few miles and then one turns onto the terminal.  Toll booths separate you from $11.05, which is the cost of a one-way ferry ride to the other side of Puget Sound.  As Valencia is classified as a motorcycle, I was able to bypass the existing queues of cagers and once I turned in my ticket at a second tollboth; was able to park near the ferry.

I chatted with some fellow riders who were there already, and soon it was about ten of us waiting for the signal to board the ferry.  I was the second motorcycle on board but because of the vehicle width, was guided to the front of the second vehicle lane from the right on the main deck.  Sweet. 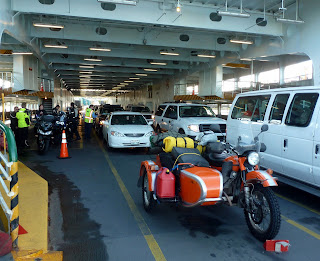 The two-wheeled motorcycles were in the rightmost lane as you can see. 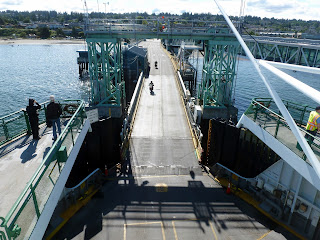 Easy on ramp for motorcycles on this ferry 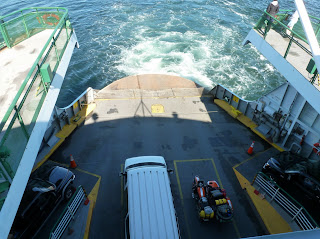 Both ends of the ferry are identical it seems, what was the stern when
we first boarded, would become the bow when we left the dock. 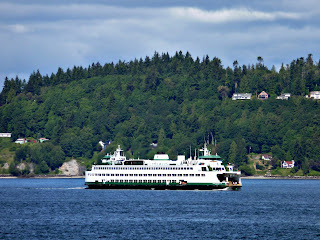 Here's our ferry's "sister ship" inbound from Kingston, WA
as we headed to the dock she'd just left

The trip across the sound was uneventful, a bit windy but not cold.  The ferry was not really very full and there was room left open in the car decks as well.

I got off first at Kingston and proceeded on through the town and followed the below route, which had been outlined to me by Glenn of GlennandSun, folks who've been following my Alaska ride and whom I was going to meet for lunch near Bremerton, WA. 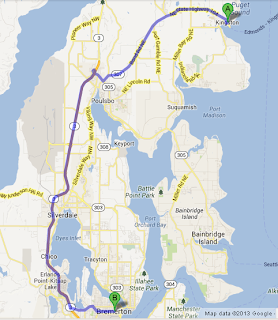 I spotted the Dennys Restaurant that was to be used as the rendezvous point and there were Glenn and Sun as expected: 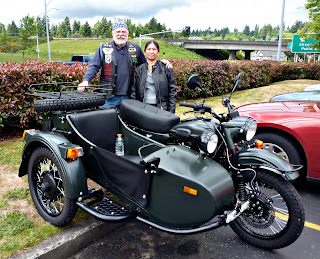 Glenn and Sun and their Forest Fog GearUP

Glenn is a retired US Army E-8, he'd made the E-9 list but decided it was time to retire and do other things shortly after Operation Desert Storm.  He was an infantryman who among his varied assignments, shared with me having served in the two of the same units!  He was, at different times of course, both in the 82nd Airborne and the 1st Armored Division; as was I.  Small world huh?

Sun, his wife of eleven years, is an electronics whiz and with her brother they run an electrical controls company.  Glenn's second career is as a Journeyman Mechanic/Welder in the Bremerton Naval Shipyard and I believe he works to cut up decommissioned ships for the Navy.  Glenn, please let me know if I got the details right, OK?

Glenn and Sun then guided me with their rig to a spot near the naval yard where I could pose Valencia for shots of the decommissioned aircraft carriers that are in the process of being converted into razor blades and such. 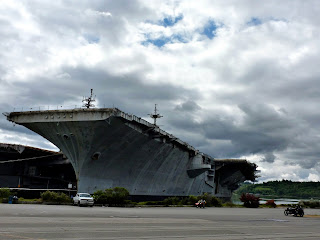 Looking in rather sad shape, the decommissioned USS Independence (CV 62) 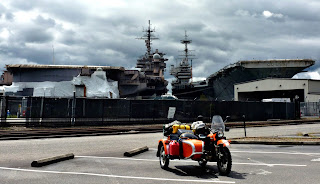 Behind Valencia, the decommissioned USS Kittyhawk CV 63 on the left
and again the USS Independence on the right.  I spent many a day on the
Kittyhawk as a civilian, helping to install computers in their brand new
fiber optic network. 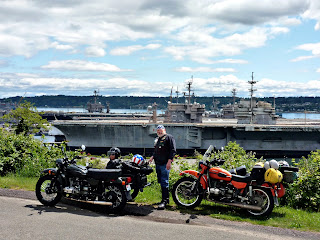 As we had been too close in the first two shots of the carriers to get their
full length, Glenn guided me to the above spot for a better view.

Glenn and Sun then guided me onto the other side of the water you see above, to try and get a different angle on the carriers and perhaps see if we could get a picture of the decommissioned 688 Class submarines that are also being cut up for scrap.

It turned out we were too far away for a good shot of the submarines, even at 20x zoom on my camera.  But here's a panoramic shot of the carriers:

Navy pictures done with, we cruised along to the small town of Allyn where "Big Bubba's Burgers" is located for a late lunch and enjoyable conversation. 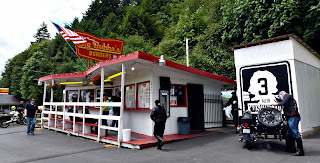 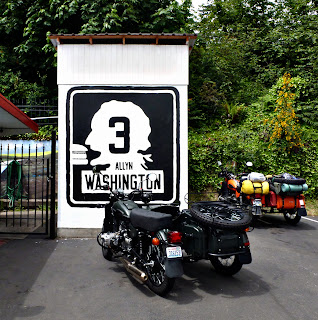 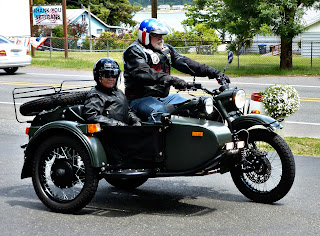 We had us some great tasting veggie burgers and beer bartered onion rings as we talked about URALs, past military experiences and got to know each other a little bit.  Soon though, it was time to part ways, they heading back north towards Bremerton and I heading south towards Westport to check out sights mentioned by Glenn.  Great meeting you both!

Westport is a small town on the water, its where Gleen and Sun have some property and they recommended checking it out for the sight of boats and a lighthouse.  I didn't find the lighthouse, but I really didn't spend a lot of time looking for it either. 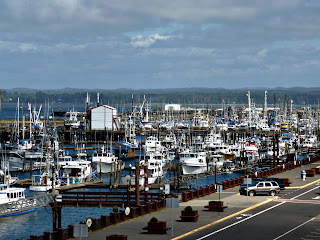 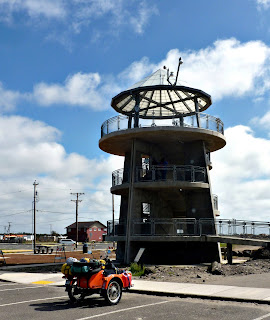 Interesting observation tower at the end of the Westport Marina

I left Westport behind and followed the below route towards Long Beach.  I'd been told one could ride one's vehicle on the beaches in Washington, as they're considered part of the state's road system.  Cool, I thought. 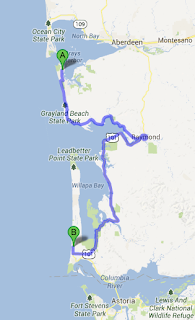 Once I got to Long Beach, I found camping space for the night at the Driftwood RV Park, power and wifi along with soft grass campsite for $20, pretty nice.

Before I set up camp though, I moseyed over to the beach access road in the downtown area and went onto the sand.  Here's some shots I took before I tried to get closer to the water: 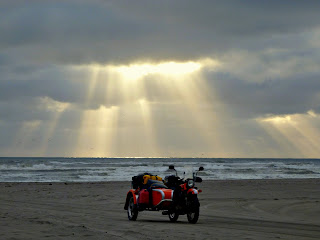 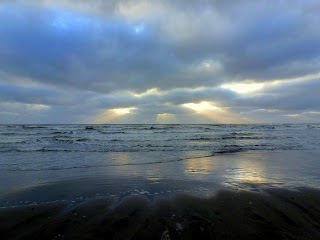 I watched a couple of trucks and SUVs go by, seemingly having no issues with the soft looking sand closer to the water.  So, in a fit of "why not", I decided to try the same path they took with Valencia.

Valencia's narrow tires, though shod with fresh knobby tires, quickly became diggers into the soft sand and soon she was up to her belly in sand!  Heck, her left muffler was buried under the sand!  Crap.

Tried for a few to get her out on my own, shoveled sand around for a bit but then a couple and some other men showed up and offered to help push.  The tide was coming in too, which was adding to the urgency of getting Valencia unstuck. 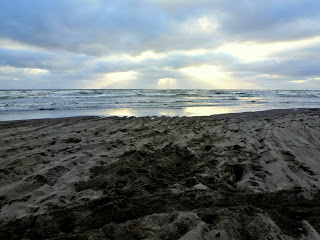 Sorry, no pics of Valencia stuck in the sand, just the hole she
left behind once she was pushed out by the good Samaritans that
came along in the nick of time.

Note, I tried 2WD, it just made Valencia basically unsteerable and didn't get her unstuck at all.  I smoked the clutch a bit in all this as well but eventually we got her unstuck and onto firmer sand.  I thanked them all and got off the beach soon afterwards.  That was enough playing in the sand for the day! 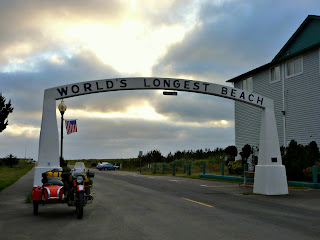 Quite the claim being made, it's like 35 miles of continuous beach....

I got back on main street, got some dinner at the local Chinese restaurant and went back to the Driftwood RV Park to setup up camp and then eat dinner while working on this posting.  Quite the day, Valencia ran great by the way.  I met new friends, tried my luck at beach sand and found the narrow wheels are useless on sand, received the aid of good Samaritans and lived to tell the tale.

Posted by redlegsrides at 11:42 PM

Wow! That's a lot of steel scccrap sitting there on the water. How did it feel to see some of your work being cut up for scrap?

I noticed the Spot track out onto the beach and wondered how it went.…

Fantastic photo of Valencia with breaking sun in clouds! Sun and I were honored by your visit.......thanks

.....Note to self for future reference: Keep Ural out of very soft sand!!! (Survival is learning from someone else's misfortune.)

Once I found out you were safe and recovered onto solid ground from the sand, I laughed until there were tears....wow, what an experience. I never was brave enough to try that fluffy looking sand myself, you have courage my friend! Ride safe, GlennandSun

What a lovely sunset. Oh my, I miss the we(s)t coast. You found a veggie burger space? Darn, I must have missed that one. I hope you liked it, it takes a few bites to get used to it ;-)

Not sure about the "longest beach" claim - maybe in the US but certainly not in the world. 90 Mile Beach in New Zealand comes to mind...

RichardM, it was sad seeing all those former combat ships rusting away. As to the sand, now you know.

GlennandSun, ya know, you might have mentioned you'd never tried it before...it might have been the "small voice of reason" that would have stopped me. ;)

SonjaM...the veggie burger was good...the onion rings were great! As to the "longest beach" claim, you know how that goes.

Glad you got unburied before the tide came in. We saw the same thing in Lincoln City last September when a car sat there overnight, stuck in the sand and the next morning it took another large 4x4 to pull it out, just in time.

I had another friend who drove on the beach and got stuck, so naturally I don't want to try it. You are too brave . . . Lucky you had help

I remember when we went to Westport there was a huge lighthouse with a very large flag of the USA fluttering in the wind. Can't imagine that you didn't notice it

This seems like the perfect day! Ferry rides, meeting friends, having lunches, great poses of Valencia in front of ships and boats and sunsets, getting stuck in sand (hey, you wouldn't know if you didn't try, and now you have a great story), and good samaritans.

I was gonna make snarky comment of how far you had to walk to get the Independence in the picture that it is barely possible to see Valencia. hehe

Bobskoot, yeah, had assumed that there'd be no missing it....I must have not looked hard enough.

BeemerGirl, if you thought the Independence was big, the Ronald Reagan makes it look tiny.