Running out of fuel when you're in the middle of some mountain trail, trees all around, and pretty much miles and miles from any kind of help, much less a fuel station, is not a good feeling.

For the longest time, I'd carried my 1.5 gallons of extra fuel in my Kolpin gas can, mounted on a bracket carrier bolted to the metal plate one steps on when getting in and out of the sidecar.  This worked for many months but in the end, all the bouncing of the rig on rough terrain led the bracket and can to oscillate and eventually break two of the three mounting tabs for the metal plate!

I'm going to have the plate re-welded into place by my friend Oscar this weekend, but the step plate will not be used again for the Kolpin mounting bracket.

Instead, after debating for some time, and almost buying the spare gas can/bracket from the Ural dealer, I decided to mount the existing Kolpin can using the panel mount it comes with, in the same spot as my fellow Uralistas had mounted their Ural-supplied gas cans.

I marked the holes once I picked the spot for the mounting plate.  Using a level, I oriented it so that the bottom end of the support arm is slightly more forward than the top end, causing the can to rest its weight to the rear.  Four holes later ( I did cringe a bit on the first one), some nuts/bolts/washers, and voila: 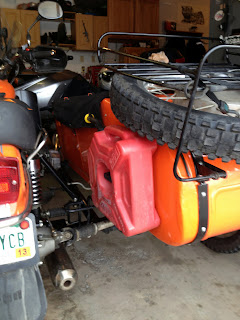 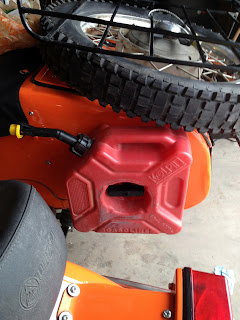 I've learned through experience, that this can will leak if I ride with the spout on the inside,
so I mount it on the outside, in case you were wondering why.l 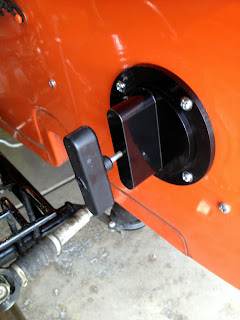 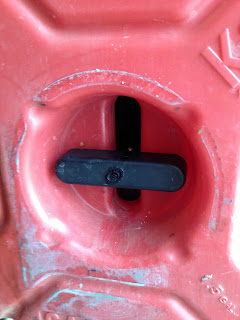 You slide the gas can over the support arm and securing handle,
turn clockwise till nice and tight, there's two dimples on the can which inhibit
movement by the securing handle, once tight. 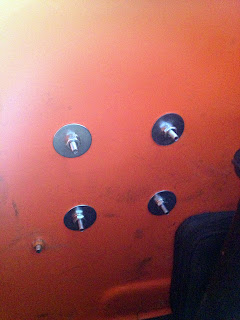 The inside of the trunk, used large washers to help
distribute the weight of the gas can. (About ten pounds) 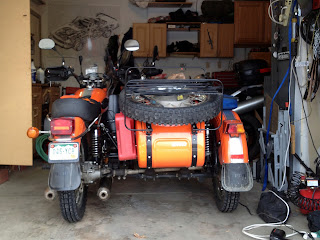 The carrying capacity is 1.5 gallons but in reality its a bit less to avoid spillage on hot days.  The URAL gas can is 10 Liters or about 2.5 gallons.  All things working right, I should be able to get 40-45 miles range on this spare gas can's contents.

If this arrangement works out in the long run, I might get a second Kolpin can for the right side of the trunk, to balance things out a bit eh?

My thanks to fellow Uralista Darrell for helping me get over punching holes in my sidecar.  I'm kidding you Darrell!  :)


Ready for the 2013 Elephant Ride
Posted by redlegsrides at 5:04 PM

Great report and pics. Will help out when I get the Kolpin I ordered. Does this mean I need to "arrange" it so you can drill holes in the right side now? :)

I was thinking that this may need to be something I'll have to think about in the future. Currently, my range was well over 200 miles. I'm assuming that will no longer be the case. But first things first, get on the road and get some practice...

RichardM, yeah your mileage will drop as you're dragging a sidecar alongside....but think of the storage space you'll now have...which of course increases weight which decreases mileage....

On the plus side, your smiling muscles will be used so often that they'll become stronger!

BTW Richard, I go into reserve these days at around 175 KM. It's a good day when the Ural gets 30MPG, couple that with a five gallon stock tank....

Yep. I was wondering about the spout. :)

I've always loved this type of gas can. But I've never needed it for the GS. However, I do need to figure out how to carry more fuel on the TW. Not planning on installing solid panniers puts a crimp on where I can attach it.

Given that it leaks, would you still recommend this product?

Richard, yep...I would still recommend it. It's competitor Rotopax makes good stuff too though....leakage is reported for both. It doesn't leak with spout outside, am good with that.

Thank you, I was also looking at the Rotopax ones but they were only a gallon though you could carry two containers on a single mount.