Vikki's first farkle and changing out her air filter

Today I had time to install Vikki's first farkle, it was a set of machined billet steel barbacks and risers. I bought them online from a fellow stromtrooper called Blair who operates SV Racing Parts.

I had found myself reaching a bit forward with the stock bar mounts on Vikki during last weekend's riding and wanted the grips brought back about an inch and a bit higher so I would not be leaning forward slightly.

They're very nicely machined parts and fit right onto Vikki. I will admit I mounted them in a hurry and badly the first time around but Oscar fixed me up today with a bit of work from his tap and die set. ( I now know how to use such tools and own my own set ) 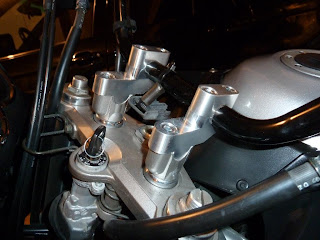 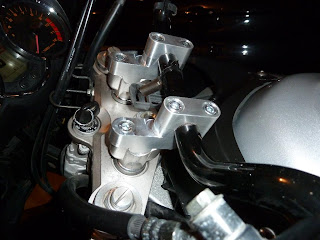 I also had a chance to do my scheduled maintenance task on Vikki, apart from just topping up fluids and such that I did last weekend.  Vikki is just shy of 11,000 miles and per the service manual, one should replace the air filter.

Suzuki packed so much technology into its motorcycles, and it comes at a price for the home wrench turner.  You have to remove a few screws, plastic covers and last but not least....the fuel tank has to come off!

It took me quite a bit as I was going slow in order to not damage things.  I am sure it'll be faster next time as I did not have to figure some fasteners out due to the manual being a bit terse in terms of instructions.

Here's the toolkit that comes with the motorcycle, not too shabby: 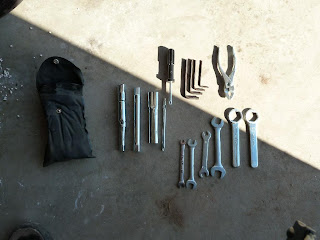 Removing the plastic side covers was pretty straightforward though I found the Givi Crash bars to get in the way of things.  Oh well.  Of course, I'd just filled up the tank so it was quite heavy but by taking things slow and careful, it all worked out. 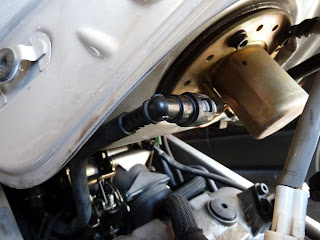 You have to remove the fuel quick-disconnect (a bit of a pain until you realize there's two tabs to loosen)
You also have to remove an electrical coupler (lower right of picture)
I also found, loose, the hose from the tank to the couple which mates it to the downtube for gas overflows, fixed that. 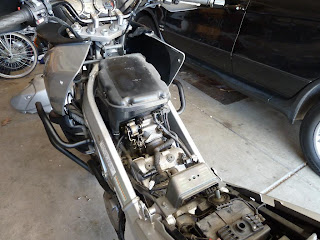 Here's Vikki, with the fuel tank removed, and the air box in full view 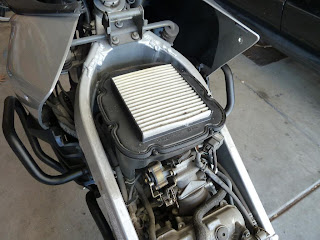 Eight screws removed, the top is simply pulled off, exposing the old air filter
it was not too dirty but since the manual called for its replacement..... 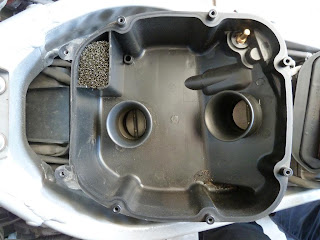 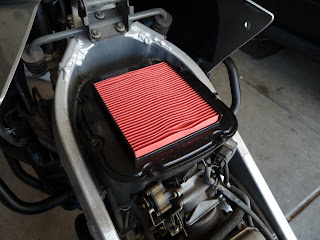 Here's the new filter I bought online from HiflowFilters
It mounted right on and then it was just a matter of screwing the air box cover back on
The rest of the task was just putting things back in reverse order.  I found a couple of things that needed fixing which led to my riding over to Oscar's place so he could teach me how to use a tap and die st.  The left side cover's mounting screw and mounting hole were stripped slightly and I found I was missing a rubber grommet for the trailing edge of the cover.
Oscar fixed the screw and mounting hole and the grommet is on order from the local motorcycle dealer.
All this burned up the morning though and so not much riding got done today, I hope to do some extended riding tomorrow to get a feel for the new barbacks.  Vikki rode great as usual, her throaty growls on acceleration bringing a stupid grin on my face as I rode to and from Oscar's house and the hardware store.
Finally, I leave you with a picture of Long's Peak which is visible from my new employer's office. 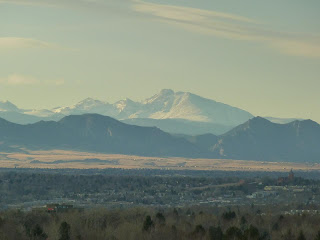 "her throaty growls on acceleration bringing a stupid grin on my face as I rode" - that's what I'm talking about! You just can't get that kinda grin just anywhere!

Hope you enjoyed the experience of taking off the tank because you're going to be doing it A LOT in the future! :)

Stacy, yea....I think it'll be easier with practice, and apparently, you have to remove it to do a lot of the services! Oh well.

I think bar risers and a foot peg lowering kit were the first farkles I bought too. Is taking off the tank about the same as taking off the Beemer tupperware? It gets faster with experience!

That's a great mountain view from your work. A tap and die set is invaluable when working on any vehicle. I use them all the time to chase the threads on just about any fastener that's being reused.

Mike...actually it used to take me a good 20 minutes to take off all the dang tupperware on the RT before I could get at stuff....I think it'll be simpler once I master gas tank removal on the Suzuki.

Congratulations on the acquisition of your new bike. I know a few riders who have V-troms and they swear by them. I know the love you have for sidecars and I think this will be a much better alternative than a Russian ammunition box.

Now, it is my understanding that the hack wheel will not be powered on this next sidecar rig of yours, but the pulling power of the V-strom should easiy dance around that.

Good luck to you with this.

I have been out of circulation for a while, and still have this damn brochitis. Wgile I am functional during the day, I end up sleeping in a chair at night. And this could become routine for a while.

Best wishes on your new job and your new project.

Dear god, I'm glad to hear YOUR bar swap went fine. This weekend a friend put new bars on an old cb750. It was an hour and a half affair, after which we learned that the ignition was disconnected somewhere, had been cut and the bike wouldn't start. All for a set of bars.

I still don't know how the hell we fixed it, but it took another hour and a half. Turned out to be easy enough, squirt everything in sight with 'Jiffy Bath' electronics cleaner. You know it's not over when that's your cure. This will return.

I'd bitch about my Beemer being worse than your Vikki, but I don't even know anymore. It's a complicated surgical procedure these days, which is why I'll never sell the 78 Honda. You can't beat that simplicity.

I have those same risers on my sv650. Interesting the vstrom air filter is completely different than the sv.