Spent most of the morning sorting out things on Vikki, making sure fluid levels were correct, tire pressure optimal, and just in general taking a good long look at the motorcycle.

It was almost Noon as I motored out of the neighborhood, Vikki's engine purring underneath me as overcast skies lent some pretty good lighting to the Denver Metro Area.  Today it would not get above the low 50s in terms of temperature and there were gusty winds through the entire ride.

I got on westbound E-470 and quite enjoyed the ease that Vikki achieved 80+ mph in a very short time.  The winds did not bother us much and traffic was very light as I made good time to Morrison, Colorado.  I got there faster than usual as you can imagine and maneuvered Vikki to a gas station to fill up her tank.

I continued North, now on CO93 from Morrison and reached Golden soon enough.  I kept going North as the plan was to go to Boulder and hopefully meet up with this guy who was advertising an old sidecar rig on craigslist.com.

By 1:00PM I was in Boulder, having thoroughly enjoyed the performance and smoothness of Vikki's overdrive gear or sixth gear.  She would, at one point, hold 85 mph at just under 4500 rpm, very nice.  I have no doubts that with a sidecar attached, she'll comfortably hold 75 mph all day long.

Once at Boulder, I stopped at a gas station to call the guy selling the sidecar rig.  No response, left him a text message asking him to call me.   Waited around for a bit, nothing.  Oh well, another day perhaps.

I cruised to US36 to further exercise Vikki's legs but the slab riding got boring fast.  I doubled back towards Boulder and exited at the Baseline Rd exit.  Baseline Road leads one to the Chatauqua Center for Boulder but al so offers great views of "The Flat Irons", rock formations for which the town is known. 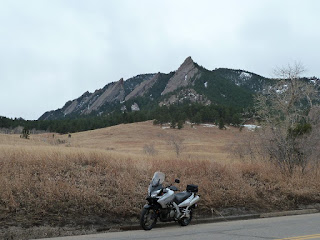 Vikki at Baseline Road with the Flat Irons in the background 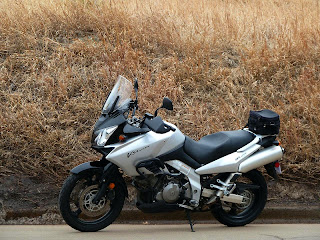 Quite capable looking, isn't she?
Still no call from the seller so I motored on out of town and turned West onto CO72 thinking perhaps of seeing how close the snow I was seeing cresting the foothills really was.
It turned out to be quite close, less than two miles into Coal Creek Canyon Rd, snowflakes started appearing in my vision.  I stopped at the first safe spot and got this shot: 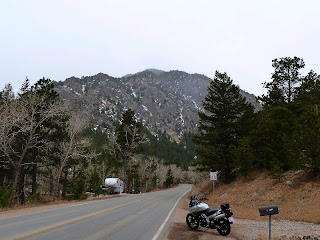 You can see the snow cresting over the canyon's rocky hills
Though the snow flakes did not last, I chose to turn tail at this point as I'm still getting used to Vikki's handling characteristics and introducing snow on the road didn't seem at all wise.
I got back on CO93 and headed South, transiting Morrison as the skies grew a darker gray.  Soon I was running at 80 mph, with no effort mind you, heading back they way I'd come on C-470.  Got home with no issues except for some really strong winds near the home neighborhoods.  I am thinking perhaps the forecast for snow for tomorrow might be accurate this time.
Posted by redlegsrides at 4:31 PM

Vikki and Nella are the same age, so I guess they would like each other ;-)

Better get Vikki that side car soon, otherwise Brigitta might get jealous of that young chick...

Glad you are enjoying the bike, I have heard nothing but positive things about them.

It is a pain when you are trying to buy some thing and all you get is no response, some times you have to wonder if people really want to sell it!

I really like the V-Strom Dl-1000, it was going to be my next bike until Yamaha announced the Tenere.
I love the sound of the engine.
The bike has nice lines :-)

As you have discovered, the Vee is very capable but non-eventful, it just does the job with no issues. The V-twin engine has lots of low end torque.

the only other issue you may have is with the leading spark plug cover. In heavy rain water accumulates and causes irratic firing. The spark plug boot has been modified on later models to stop water from accumulating into the spark plug well. Not a big issue but a simple fix

It sounds like you are really having a great time wiht the new bike. I've heard that the V-Stroms are very reliable and low maintenance. How are you going to justify the need for a shop? I looked at these a while back but thought that the seat height was too high for me. But then again with a side car, that wouldn't matter would it...

BTW, Thank you for all of the replies to my side car questions.

Good to see you out and enjoying the vstrom! I'm jealous of your good weather. We are getting more snow soon.

Nah, the girls get along fine, I given them all equal attention. : )

Raftn: I am beginning to think the guy doesn't really want to sell it, oh well. Thanks for your feedback re the Suzuki as well.

GeorgeF: She's got a good sound indeed, so smooth in sixth gear....it makes poor Natasha sound more tractor-like than ever.

RichardM: you're quite welcome re the answers about sidecars....I hope it helps you in the long run. The Strom is a tad high for me as well, I have to slide up to the tank to flat-foot it....it was the same way with my 1150RT. But like you said, once you hang a sidecar on it....

Chris...I plan to ride the V-Strom tomorrow, it's going to be above sixty and sunny! : P