Back in March of this year, I was invited to attend the regular monthly meeting of the British Motorcycle Association of Colorado or BMAC, down in Colorado Springs.

I met some hard core British Iron enthusiasts there and have run into them at other events such as Bob Ohman's Old Bike Ride #7 and #8.


Recently, one of the BMAC members, Super_Chief, achieved quite a feat as part of a team running a sidecar rig down in the Bonneville Salt Flats in Utah.  Here's his story of the event:

Bonneville Salt Flats Motorcycle Racing 2010
We found no fault, with the salt !

It was last year when my friend Kris got the bug, he was hooked. He just had to race one of his motorcycles at the Bonneville Salt Flats !  He had just returned from the 2009 “Speed Week’ at Bonneville as a crew member, helping one of our other motorcycle club members, Jerry, race his bike

At our next club meeting Kris approached me about joining with him to race one of his Harley Sportsters at Bonneville.  I not only said yes but, heck yes !  Then he told me that he was going to race in the sidecar class.  Whoa, wait a minute, I am not going to get in any sidecar at those speeds !  He then told me that they don’t allow a passenger for safety reasons, and that I would be his crew chief.

After a year of arduous work, myself finding the parts, race fairing, sidecar wheel etc., and Kris putting the whole thing together, we were ready.  With our one off ’69 Harley Sportster sidecar racer, sitting atop our open trailer and being pulled by our trusty Honda Station Wagon with over 200,000 miles, we were off ! 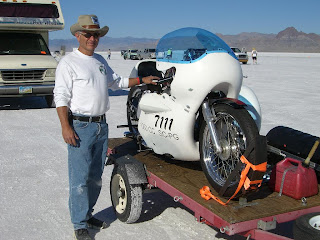 13 hours later we were there, Wendover Utah is a place like no other. It sits right at the Utah/Nevada border, casinos on one side, the Bonneville salt flats on the other. We arrived too late in the day to drive out on the salt flats. So my first taste of salt would have to wait until morning.

At 8:00 AM I became a certified “salt-aholic”, it is truly amazing, the salt falts are like being on another planet, maybe Mars!  It is so white in all directions that you lose perspective, where am I?  Wait a minute Kris found a sign . . . 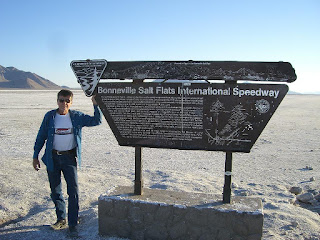 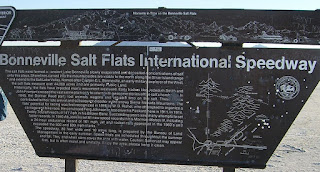 We nicknamed our sidecar rig “Bonneville Betty” and the name of our racing team is “Super_Chief”.  I designed up a T-shirt to announce our race team to the world of Land Speed Racing . 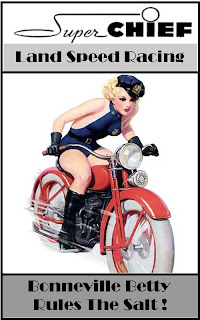 Our first day on the salt was a busy one, setup the pit area, fill out the paperwork, get the race bike and our gear through technical inspection, fuel up the bike with the $10 per gallon mandatory race fuel,  man, when do we get to race down the course?

We could race the next day, but only after we passed rookie school, which we did. Oh no, it meant that now we were really going to go down the course!  Would the bike make us proud and at least go over the ton (100 mph)?

The record in our class was set @ 126 MPH, we surely wouldn’t beat that this year. No more waiting, we were next in line and it was now or never . . . 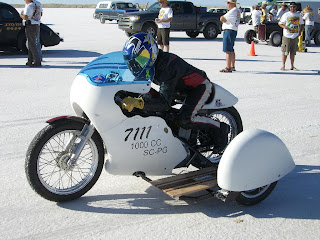 The bike started just fine, the flagman waved Kris on and he left the starting line. Hang on, here we go !  I followed in the chase vehicle (can you say Honda Station Wagon) to pick Kris up after the 2 mile marker.

When I got there Kris looked discouraged, he said when he shifted into high gear it felt like the bike was not accelerating, so he attempted to shift back down to third gear, then the engine quit, darn.  Back at the pits we discovered that Kris had merely hit the kill switch with his thumb when working the throttle during the downshift. The engine was fine, we repositioned the switch, but it was too late in the day for another run.

We would have to wait until the next morning to run again, and run we did. Our next run netted us an average speed over the second mile of, get this,  111 MPH, WOW !  After yours truly, aptly nicknamed “Super Chief”, did some adjustments to the engine timing and mixture setting we went out to give it another go.

This time the waiting line at the short course was really long , an umbrella can really help keep you cool out there, just ask Kris with all his race leathers on, it gets a bit toasty.  .  . 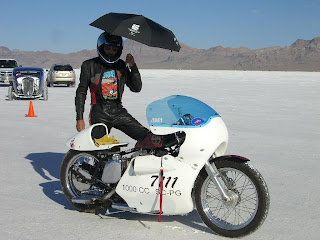 Well, they don’t call me Super (Crew) Chief for nothing!  This time we hit over 115 mph, we were dancing in the pits.  We had met our goal of over 100 MPH, and knew our old engine had given us everything she had.

Another member in our motorcycle club, Jerry, finally got his BSA to run decent and set the production vintage 650 class record . . . 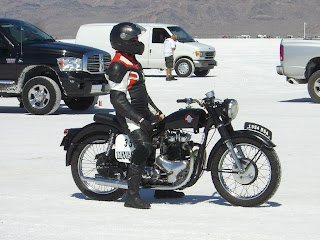 Jerry on his BSA


Jerry (black BSA 650) was going after an open record in the 650cc Production Pushrod Vintage (P-PV) prior to 1955 is vintage. So all he had to do is get down the track twice and he would have the record.

Problem is that many people think that BSA stands for "Bast*rd Stopped Again", and Jerry's BSA was living proof.  Over the past two years Jerry's BSA has seized 3 times, including right @ Bonneville this year !

It was only a mild seizure, once cooled down, it started. So he kept the revs down and managed about 50 MPH and got the record.  If nothing else Jerry is tenacious, he stuck with that old bike and we are proud of him for sure.

Another member, Jack, was going after upping his own record, but just missed it  . . . 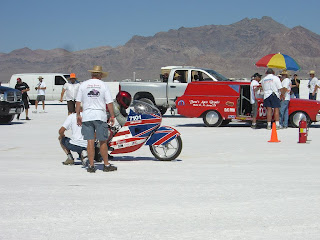 With his red/blue 250 Triumph, Jack holds the record in 250cc Class for Motorcycle Partial Streamliner - Pushrod Gas (MPS-PG).  His record is an amazing 101 MPH, he had reworked the cyclinder head on his bike for this year, but only managed about 97 MPH, the God Of Speed can be cruel!

George’s new bike, a beautiful bike which he designed himself, had some handling problems but still managed about 80 mph, not bad for his first year out . . . 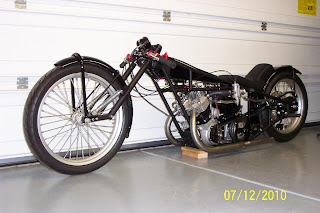 George (low slung black Triumph) was in the 650cc Special Construction Pushrod - Gas  (SC-PG). The record in this class is 126 MPH, so once George gets his handling dialed in I feel he is a shoe in.  His motor with those open pipes sounds really healthy, he'll get the reord next year !

Will we be back next year ? with a rebuilt engine ? and try our luck again?  You betcha we will !
Well that’s about it, one fun time, neatest people you’ll ever meet, and yes, if you go once you’re the real salt of the earth !

For more information about our motorcycle club here in Colorado Springs, visit our website:  http://www.bmacinc.com

My thanks to Super_Chief for this great story of their exploits on the Salt!

Posted by redlegsrides at 8:09 PM