An RPOC kind of day

*RPOC: Russian Piece of Crap, the unkind nickname given to Russian sidecar rigs and usually referring to the crappy quality control on the components used for said motorcycles.

Warm day today, sunny skies, figured it'd be perfect for a ride to Golden, CO on Natasha to introduce myself to the nearest known Ural mechanic and show him some stuff I wanted replaced due to cracks being in evidence.

Took me an hour and ten minutes using city streets. Mainly Hampden to Kipling, then a brief sprint on US6 till I got to Golden. I got to the shop and found out that Dennis, the owner, was on a parts run and wouldn't be back for an hour. Instead of hanging out, I rode up Lookout Mountain. You might remember the road up to the top is full of hairpin turns. I must have been one of the slower vehicles going up that road today. I was taking it real easy on the right hand turns and not much faster on the left hand turns!

There were two packs of beemers that zoomed past as I was stopped, luckily, taking pictures. There sure were moving along smartly. 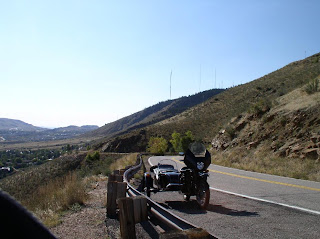 Heading up on Lookout Mountain Road 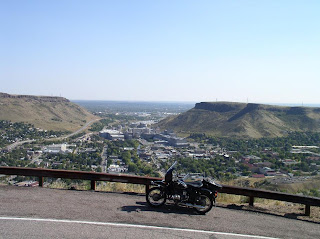 That's Golden in the background between North and South Tabletop Mountains

Got to the top of the mountain, where the Buffalo Bill Museum is located, turned around after checking in with my loving wife. Headed back down the way I came up, again setting no land speed records but managing to at least go the speed limit.

Got back to the mechanic and talked to Dennis, showed him the carbs on Natasha and he tut tutted for a bit, while rummaging through his spare parts area. Turns out, that since 1996, the airbox has been modified on Urals and I'd either have to replace the airbox or cut it to make the current rubber air intakes fit correctly. The current ones had some cracks developing around the ends. I'll have to think on that one and see if I can find a suitable part elsewhere, don't really want to cut up the airbox!

I did get some gas lines, 6 feet worth, to replace the crackings ones on Natasha so it was not a totally wasted trip. It's quite a ways to Golden from my house, not sure it'll be convenient to use Dennis' shop for repairs I can't handle.

On the way home, I kept getting stuck in construction traffic. I was sweating and I am sure Natasha was not having a good time either! Then, the RPOC sequence began: She stopped running while I was idling while stuck in traffic. I went to start her with the electric starter....nothing. Several attempts later using the electric starter had only resulted in me slowing moving out of traffic and into a shopping center's driveway. I pushed Natasha the rest of the way into a parking spot, not too bad but did I mention it was a hot day?

I thought perhaps something had overheated, so I doffed my riding gear and let Natasha cool down. Perhaps 30 minutes later, tried the electric start again. Nothing, the starter would spin but the engine would not catch!

On a whim, I tried the kickstart and damned if she didn't start! I hurriedly put on my riding gear and continued riding home, thinking that there was apparently something wrong with the starter switch! (In retrospect, this did not make sense since I could hear the starter spinning)

I was riding along when perhaps 2 miles from the house when while idling at a stoplight, she dies on me again. Again the starter failed to get the engine to restart. I managed to move her off the street onto the side of a housing area's entrance.

Took me a while to get her in neutral and when I did, no amount of kick starting would get the engine going! Desperate, I tried the electric starter and it started! Damn, so it's probably not the starter switch. I got my riding gear on and made it home.

I cleaned out the air filter while I let the engine cool down and I posted some queries on the discussion forums for these RPOCs.

I took it out for a test ride and she was running really rough and misfiring under load. Not good, I got her back home.

I checked online at the forums and the consensus seems to be leaning towards a bad coil. I located it, checked for loose connection and tightened one that seemed a bit loose.

Took it out for another test drive and there's still misfiring going on at anything above say 5mph! Aaaaaarrrrgggghhhhh. It's definitely ignition related though, she's acting like she's misfiring. Now I have to find and order a new coil I think. Hopefully, I'll find or someone will list how to check the existing coil to see whether its bad or not.
Posted by redlegsrides at 7:50 PM

Hi Dom, Check with Felicia on this. The airbox on Natasha should be 2002 as it came with the 750 upgrade. The 650 engine had a plastic airbox with oil bath type filter.

im sorry for the trouble you had today. but i am loving your adventure with the new family addition, Natasha :) you'll figure it out, im sure...

That would have me nuts... The fact that the engine would start on the kicker and not the button, and then just the opposit a little while later.

At least you are categorically able to figure ot what needs replacing and are able to do most of it yourself. I am not really up on a lot of this, and I was wondering... What is an oilbath airfilter? Does that mean the filtering element is flushed with motor oil?

1weekender, thanks Phil, will check. I also spoke to the owner at holopaw and he walked me through the check the timing procedure...nice guy. He says, I've got a type 4 ignition because I've the coil and silver hockey puck under the plastic cover together. Type 3 has no hockey puck, type 5 has hockey puck outside, type 6 is the ducati. Felicia is sending me the carb flanges, and I can procure hoses from aviation supply sources.

mq01, thanks for the sympathy but I am enjoying learning about my rpoc, I've got her back to about 99% today. More in future posting.

Jack, yeah the stuff was initially frustrating but have picked up diagnostic tips/info and experience through it all. In the end, its a positive thing.

oilbath filter, its made by K&N and are known as such. (not good for airhead beemers, not sure about the flying bricks). its basically a filter you spray with special oil and put into the airbox...when its the regular time to swap out a typical paper air filter, you take this one out, clean it re-oil and reuse.....more expensive initially but in the long run.....