Miscellanea .... A Ride for Brigitta, the Sammy loses her new Oil Pressure Gauge and gains a Windjammer Clone.

In an effort to get some miles onto Brigitta's (my '87 R80 Beemer) odometer, I rode her all the way to the Hugo State Wildlife Area.  This was on Monday, May 16.

It would prove windier than expected, especially while moving at 75 mph eastbound on the I-70 Super Slab towards the town of Limon, CO!  I had to go, several times, into "dancing in the winds" mode as gusts would hit me from the front right quarter mostly.

Still, got there OK, and discovered that a third of the SWA is now off limits, the southern third to be exact.  Not reason found except a sign stating the road leading to the southern campsites was now closed to all but "authorized" traffic.

Incoming weather had clouded up what had started as bright blue skies; so the pictures taken didn't turn out.

I returned via CO Hwy 74 into Colorado Spring's eastern suburbs, through the small town of Black Forest and finally onto CO Hwy 83.  A total of 256 miles ridden, and boy was I tired at the end of it!  I'm thinking my days of long distance riding on motorcycles, whether two or three wheeled, are coming to an end.

The Sammy's new water pump continues to work fine.  The new normal, in terms of the temperature gauge on its dash, is for the needle to slowly climb towards the midpoint as the engine warms up and stay there.  No more going all the way to the 3/4 mark before then lowering to the middle and staying there for the rest of a drive.

I went to the RV storage yard with a small air compressor and blew out the water lines on the VRRV.  We were expecting cold temperatures Friday/Saturday of this week you see.  A very late Winter storm had caused a Winter Weather warning to be issued to the Front Range.

Update: not much snow accumulation resulted in the Front Range.  Heavy, wet stuff that cause some tree damage as branches were overloaded and broken off.

Spent a lot of time cleaning off the dirt and crud that had built up due to the failing old water pump.  Got a lot of dirt off the underside of the Sammy as well.  Of course, in the midst of doing this, I "improved" the routing and securing of the plastic tubing used by the oil pressure gauge I'd recently mounted.

This "improvement" proved fatal to the gauge's continued presence inside the Sammy.

Yesterday, I was returning from a short drive and had backed the Sammy into the garage intending to work on installing a plastic sheet behind the driver compartment (beginnings of Windjammer Clone)

To my dismay, I saw a trail of oil on the driveway and into the cul-de-sac as well!  Hastily shutting down the engine, I looked underneath the Sammy and there was oil pouring from the engine compartment and smoke was evident from burnt oil when I opened her hood.  Dammit.

Yep, the oil tube had worked itself loose and had come to rest against the hot edge of the exhaust manifold shield.  Melted of course, and had been spewing engine oil all over.

After unsuccessfully trying to replace the plastic tubing with brass tubing from a kit I'd prepurchased, I gave up and removed the oil pressure gauge and components.  The sandwich oil filter adapter remains, but all four ports are sealed now.  I'll probably remove the sandwich adapter next time I change the oil on the Sammy.

Needless to say, the spilled oil made quite the mess.  I spent most of the evening and part of next morning cleaning things up both on the Sammy and the driveway.

I also spent some time this week learning how to use a steamer to "shape" a straw hat I'd bought years ago.  What do you think? 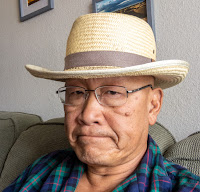 Spent most of the morning finishing the attachment of a homemade version of a Bestop Windjammer on the Sammy.  It basically mostly seals off the driver/passenger compartment 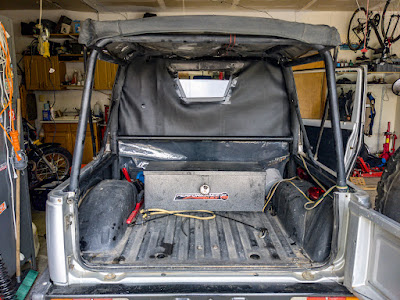 In My opinion, the above clone actually does a better job of keeping the dust out than the actual Windjammer produced by Bestop.  It's a much quieter ride now.  The window is clear Plexiglas, and while a bit red-neck, the black Gorilla Tape should hold things secure.

Here's how she looks now, in Safari Top mode: 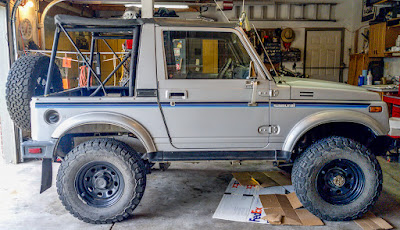 Posted by redlegsrides at 10:10 AM

Well, well, a top hat for the Sammy and one for you, too. The straw hat becomes you and will serve you well.

Thanks SonjaM, the straw hat will be my traveling hat.

You look like a suave riverboat gambler with that hat. Very nice. I recently saw a samurai for sale here in Utah but with your problems and my son in laws problems I’ll pass.

Thanks Guapo, the Sammy has been quite the experience so far, she's not boring though and is growing on me.

Did the oil tube have a hose clamp on it? Would not have thought that the pressure inside would be strong enough to dislodge the tube. Bummer.

Like the idea of the back screen. Also be easier to heat up the inside in that smaller space. Will you roll it down when towing?

CCjon, tube wasn't dislodged, it melted where it came into contact with the exhaust manifold's heat shield.

The windjammer clone doesn't roll up easily....no need for it to do so. When towing, the windows are up so no air pushing on it unless it's a tailwind and even then....

Thank you Bluekat. Yeah, high winds are definitely way too "interesting" while at highway speeds!