Now that the Sammy appears to be willing to be operational, it was time to do some other things for her.

Some of you were aware that the Sammy sported a sticker on the spare wheel which read:  "0 to 60, Eventually".  Something to perhaps give clueless drivers a hint that perhaps the Sammy doesn't accelerate as fast as normal traffic.

Today, I decided to remove it and try this one on to provide the occasional idiot a clue.  I also added a 4x4 oriented sticker as well, see if you can spot it. 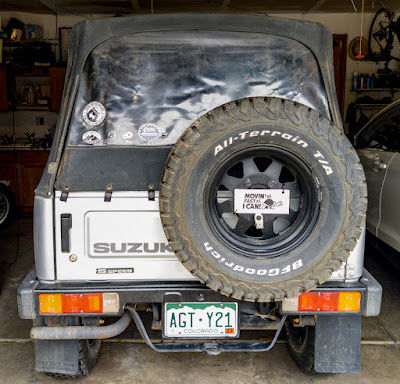 Now, those of you who've had cars with soft tops, know that they're a pretty tight fit to start with; and almost impossible to attach all the fasteners.  In the Sammy's case, it's always been the ones securing the rear window.
As you can see, close but no cigar, unless one leaves the soft top under a hot sun for quite some time to soften things up. 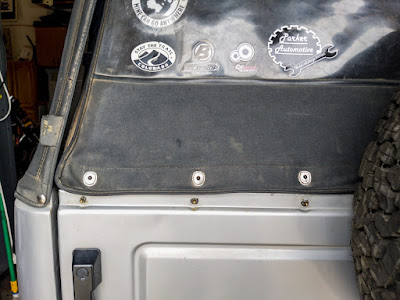 Enter the solution which I found on the Internet, usually used for canvas covers on boats.  I'd used something similar to secure the rear clasps on the sidecar's tonneau cover for Scarlett. 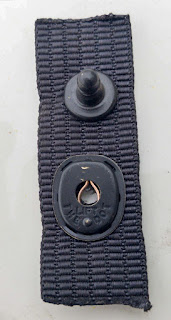 I'd bought from Amazon ten sets of the above Lift-the-Dot fasteners.  They arrived today and I made up four extender straps. 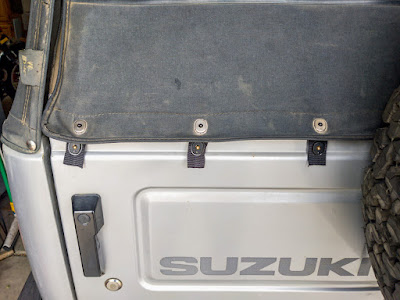 In case you're wondering, the fourth one is on the right edge of the window.
Since the zippers for the rear window are shot/useless, being able to secure the four anchor points on the tailgate keep the window in place and not flapping.
I know, I know, I said something nice about the Sammy after the recent torture drive and she responded with a blown water pump.  You're probably thinking I'm just asking for more trouble.  We shall see.
May 15 Update:  Two long drives so far since this post first published, no issues!
Posted by redlegsrides at 5:30 PM

Yep, just begging for it…

I appear to be a sucker for punishment RichardM....

Interesting, that the Sammy seems to be a "her". Piece of work, eh? Hope things work out the way you planned it, Dom.

All cars and motorcycles are female to me SonjaM. They are enchanting, vexing, and always surprising one....