An Oil Pressure Gauge for the Sammy

Given:  The Sammy goes through oil.  I think it's being burned and out the exhaust.  (No apparent leaks, which would be preferable)

So, a nearly religious daily pre-trip check of oil levels is required.

Lately, she "seems" to steady at a bit above low mark on the dipstick.  Hmmm.

So today I added an oil pressure gauge and a Glowshift oil filter sandwich plate adapter that I bought from Amazon.  The Glowshift adapter went on with no issues, though I appear to have stripped one of the four port caps. 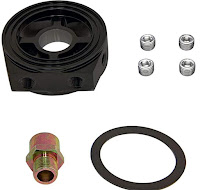 Glowshift 3/4-16 Thread Sandwich Adapter
The oil filter sandwich adapter goes between the oil filter mount and the oil filter, providing 4 ports to use for the installation of sensors. Onto one of the ports, I installed this kit:

Dorman 7-153 Kit.
I managed to pinch the tubing from the Dorman kit while feeding it through the firewall on the Sammy, dammit.  So basically I ended up using just the gauge pictured above.  The fittings didn't work right with the tubing I had left over from a previous project.
After trying to "make it work", gave up and drove to the auto parts store and found this:

Bosch FST 7554
Sadly, the guys at the counter of the auto parts store had no clue, and I just happened to find the above kit while debating buying another oil pressure gauge to obtain access to the tubing/fittings kit that is included!
I had to remove the fitting that came with the Dorman gauge's kit (not compatible) and use the fitting that came with the FST 7554 kit, a little Teflon tape, and voila, a good oil seal!  (Before, large oil leaks!)
I'll monitor the adapter and fittings of course for leaks.  I am a bit leery of the oil tubing used and I'm not sure how durable it is.  I can see an electronic pressure fitting in the Sammy's future, but we'll see.
I went for a short test ride, the oil pressure gauge reports 50 PSI above 3000 RPM.  The Samurai's service manual says oil pressure should be between 42-60 PSI at 3000 RPM.
At idle, the pressure gauge drops down to around 20 PSI, which I believe is normal. 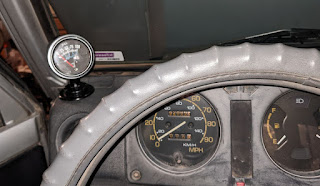 I'm hoping, the use of this oil pressure gauge, will give me a timely warning that the oil level in the engine has dropped too low.  I don't want to rely on the oil pressure sensor that comes with the Samurai, which uses an idiot light to tell you oil pressure is a problem.
NOTE: Though both the Dorman and Bosch tubing kits claimed 1/8 NPT threading, their components are NOT interchangeable!  The tubing for the Dorman kit was slightly narrowed in Outer Diameter than the Bosch Tubing!
Update: Had to bump up the idle from around 900 to 1100 RPM so that idle oil pressure was at least 12 PSI, at 900 it was barely 6 PSI!  Oh, and I found a 2.50 1/8-27 plug at Home Depot for the one I managed to strip while installing on the sandwich adapter, the OEM wanted $15 for two!
Posted by redlegsrides at 9:43 PM

Thanks for writing this up, have alwaus wondered about installing one of those gauges. Glad to hear it wasn't as bad as I thought it might be. AND it actually works.

I'm told, CCjon, that mechanical is better than electrical when it comes to these gauges....this is actually my second one, had one on the '99 Bural but it leaked so much at the fitting that I ended up taking it off. The one in the Sammy developed a slight leak so I tightened it a tiny bit more and it seems to be holding....