Riding on the Darkside

Amongst Beemer Airhead motorcycle owners,  going to "the dark side" is jokingly used as the Beemer rider who forsakes the Teutonic perfection that is the air-cooled boxer engine; and buys instead a BMW K motorcycle with it's "Flying Brick" engine mounted on its side.

Turns out, there's a different variation of moving over to the dark side.  In this case, its called riding on the darkside or putting a car tire on the back of a motorcycle!

Why do this you ask?  Well, there's several reasons apparently, but the main one I believe is for sidecar rig riders who are seeking more mileage out of their pusher tire.  A pusher tire, is the nickname for the rear tire on a motorcycle (tug) attached to a sidecar.

Due to the stresses involved with sidecaring, regular motorcycle tires don't last as long as when mounted on solo motorcycles or the regular two wheels.

Expensive as good motorcycle tires can be, this could get expensive in a hurry if one puts a lot of miles on one's sidecar rig.  As I intend to do this high mileage riding, I went over to the darkside today!

One problem is that regular motosport shops will not, for liability reasons, mount car tires onto motorcycle rims.  Damn lawyers and this litigious society of ours!

I had found one place who was willing to do it called Faster Motosports up near the intersection of US 85 and I-70.  However, I'd queried my fellow Uralisti and one of them, Craig H had volunteered his tire changer he'd bought from Harbor Freight.

Today, I rode Vikki, my V-Strom sidecar rig over to Craig's house and he taught me how easy it is to use his tire changer to do the deed. 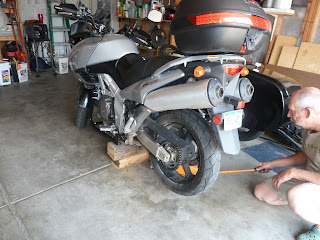 Using a jack to elevate the rear of the tug, then support it with bolted together 2x4
blocks of wood 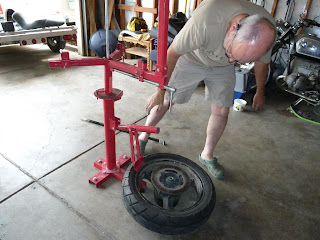 Craig uses the bead breaker tool of the tire changer to break
the tire bead free from the rim.  Easy Peasy.
Note: to protect the brake disc when we flipped the tire over to break the
bead on the underside, a simple use of a roll of duct tape kept the disc off the floor.
We're calling it the Heitman Adapter in Craig's honor as he thought of it. 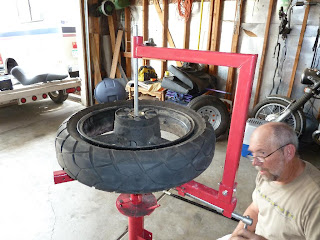 Craig then carefully adjusted the three securing points that engage the
wheel rim to hold the tire securely.  This took  the most time as he was very careful and methodical
in order to not scratch my rim. 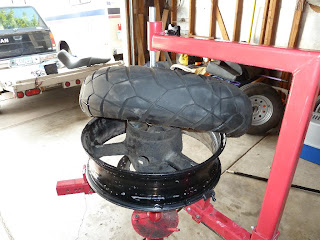 Once everything was locked in place, and the tire and rim was lubricated with some dish soap mixed
with water, he used his "mojo bar" to lever the tire right
off the rim!  It was so fast I didn't even have time to take a picture!  Wow. 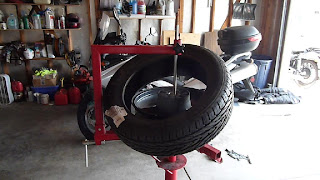 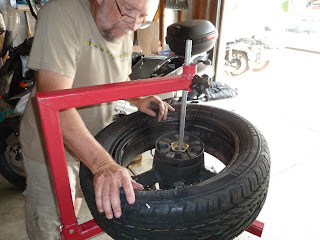 Here Craig does the initial engagement of the rim and new tire, prior to both of us
then pushing the tire onto the rim using again his "mojo bar" and some downward pressure by me and him.
He also used a large clamp to anchor a portion of the tire so it would no slip out of the rim when we
got close to getting the whole bead into position. 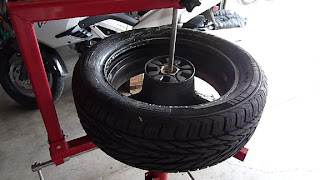 It took a bit more effort to get the new tire on than it did to get the old tire off but
here it is, ready to be inflated to seat the bead in place. 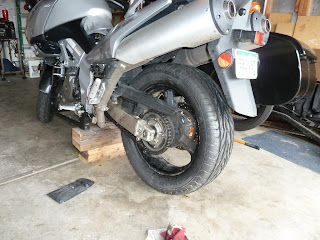 Here's a view of the new tire, mounted in place, good amount of clearance all around 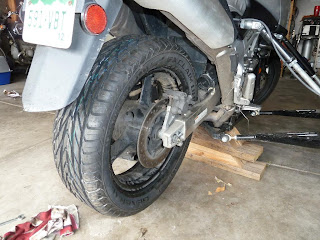 Another view of the new tire, looks like it belongs there doesn't it? 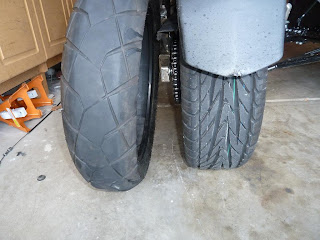 A side-by-side comparison, the nearly worn out motorcycle tire to the
left of the new car tire. 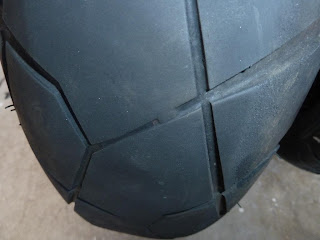 As you can see, I was really close to the TWI or
Tire Wear Indicator all motorcycle tires have to clue you to it
being time to replace a tire.

There's videos on youtube that show how the Harbor Freight tire changer makes the work of changing tires pretty easy.  Here's one:  LINK, it's a three part series but well done in terms of illustrating how its done.

I am going to be getting one of these manual tire changers, it'll pay for itself pretty quick I believe and I can, like Craig, be helpful to fellow riders when the need arises.  The hard part will be finding it I think as I could not find it anymore on Harbor Freight's web site.

Thanks very much Craig!  I owe you one, thanks for your time and instruction!

Email ThisBlogThis!Share to TwitterShare to FacebookShare to Pinterest
Labels: Maintenance

These V-Strom sidecar riders are the ones who inspired my swapping my pusher tire to a car tire:

Does this mean that you can switch to winter tires come winter? Are studded tires allowed in Colorado? Can you run a car tire on the front?

Several other riders around here have the Harbor Frieght model. The claim is that it doesn't take long to pay for itself assuming you have the space.

Yes, I can put snow/studded tires on the pusher....and studded tires I've seen used here in Colorado. Assuming of course I can find them in the right size.

As to the tire changer, if u find the right one, it comes apart for easy storage.

You can put a sidecar tire called the Avon triple duty on the front...heck I am almost certain a Ural tire would work. The avon named though is reported as not very grippy though long lasting. If the ural knobbie from Heidenau doesn't fit, may just go with something like your TKC80 or something from Coker tires perhaps. Again it's a matter of availabilty and cost.

You want a squarer profile tire for traction and tracking in the front.

Thanks for commenting, now if any of the guys with the HF changer are wanting to sell it....pls let me know!

Congrats on finding a car tire to fit. I'd love to get one on the Ural.

I have had that same tire changer for a couple years now. It has more than paid for itself. I did upgrade it with mojoblocks and a mojolever. I also bought the balancer which is also super simple to use.

Hope your sidewalls can handle it.

I think there are many Tyre parts and accessories such as bead livers, air tubing and fittings, tire tube, swabs, containers; mount and other parts as well which take a role to make a Tyre. You have great collection regarding Tyre Changers. I would like to say Thanks for sharing informative article.