Back at the end of April it seems, Phil B, who'd taken Maria in trade for Natasha back in September of 2009 had sold her to her new owner: Gates B, aka "Skeeter". 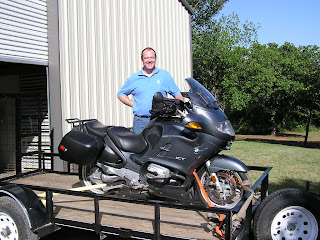 Maria's new owner: Skeeter
Picking up Maria from Phil B.
Skeeter lives in or near Tulsa, OK and told me this about himself:
I have worked in the Aviation industry for 20+ years.  First as an engine mechanic in the US NAVY then with American Airlines; the past 11 years as a Program Manager; doing mods to AA’s fleet and most recently supporting the US fleet of F/A-18 aircraft.  The RT is my first bike in 15 years; my previous bike was a Yamaha 750 Maxim.  I have always wanted a BMW because of the reputation as a great road bike. Several friends years ago had BMW’s and I liked the looks.
I am a season ticket holder with the KC Chiefs and make approx. 10 trips a year to see the Chiefs play.  This ride is 500 miles round trip from my home in Tulsa.   I will be riding to work as often as I can (13 miles) and look to do some short trips on the weekends to Arkansas for some mountain road trips.
Skeeter recently sent me an email letting me know that Maria is approaching the 70K miles mark and asking me what oil I'd been using on her for services.  Attached was an updated picture of himself with Maria. 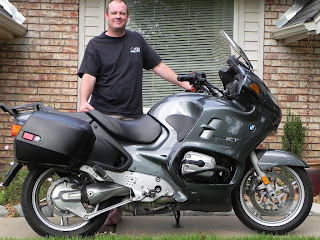 Maria is looking quite good, don't you think?
Maria appears to be in fine fettle in the picture, so I know Skeeter is taking good care of her.  I've asked him to keep in touch and perhaps send a picture or two during his rides on her.
Posted by redlegsrides at 9:42 AM

Looks like your old bike went to a good home. That always helps me sleep at night. Of course, the money I took from the sale and spent on a new bike usually keeps me up. Eh, fair trade.

Interesting... I always try to find good and caring owners for my bikes, and like to keep tabs on the bikes if I can. Looks like Maria has found a great new home.

Good to see your old bike is enjoying a good home. I have yet to sell a bike, but my wife is selling her GS500.

I completely missed the idea of the bike going to a good home. I was just in a trance over the idea of buying a BMW.

Don't tell Riepe but I want one. I have been scheming in my head how to pull the trigger. Doesn't help that we just bought two new cars. And I want to keep the Vespa. Maybe I can sell my Leica system....