Riding in the 2011 PBTF Colorado Ride for the Kids

This past Sunday I had the priviledge to help support the Pediatric Brain Tumor Foundation's Colorado Ride for the Kids.  I'd attended for the first time last year and was fortunate to be able to give a ride in my Ural sidecar to James Briggs, one of the kids who the foundation has helped in his fight against the brain tumor he was diagnosed with as a very small boy.

Last year's weather was wet and cold and still it was a great ride.  This year's weather could not have been much more close to perfect:  sunny skies and cool breezes.  I got there shortly after 8:00 AM, parked my Suzuki V-Strom Sidecar Rig whom I call Vikki and walked about admiring the other rigs and motorcycles which had shown up. 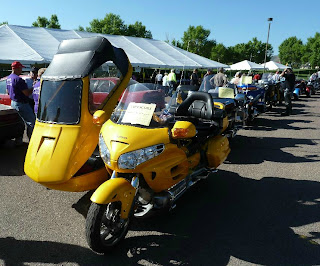 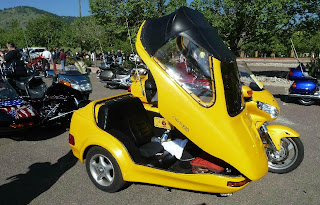 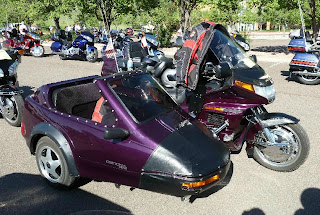 Another Goldwing with another Daytona Sidecar 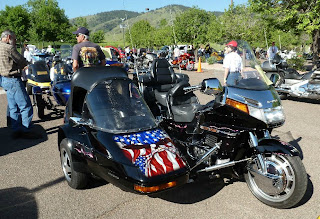 A somewhat more appropriately sized sidecar on this Goldwing 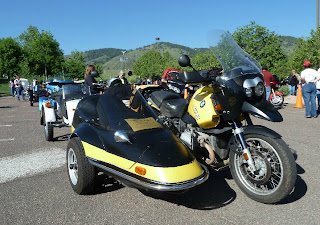 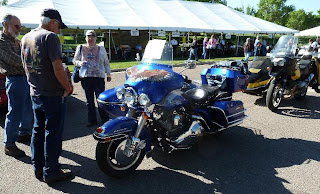 A classic Harley Davidson with Sidecar 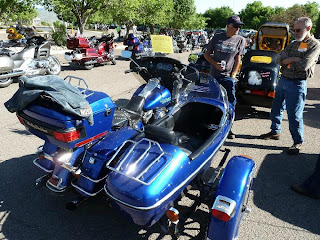 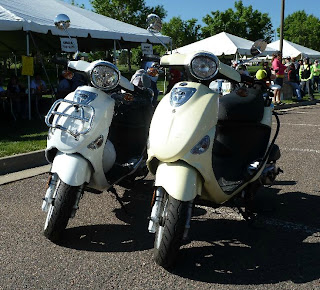 These two scooters made it through the ride, one of them ridden by one of the "Stars"
of the PBTF, Colin.  A young man who's a brain tumor survivor. 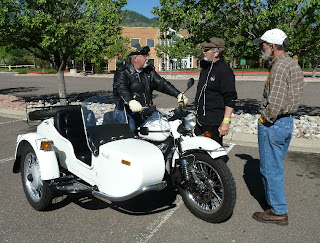 Spat (far right) and I spotted these two gents conversing at this nearly brand new
Ural Patrol, with only 1300Km on it!  Spat's Ural is also white but a 2008. 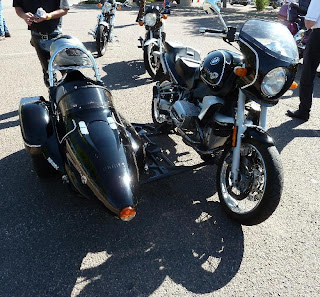 My first closeup and personal look at a "leaner" sidecar rig by Armec.
You ride it like a regular motorcycle and no worries about "flying the chair" unintentionally. 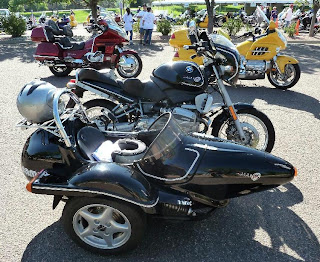 I think this year's turnout was bigger in terms of number of motorcycles that showed up.  The large preponderance of motorcycles was Honda Goldwings, the local Goldwing chapters and Honda have supported the PBTF since 1991 in the strongest way and today was no exception.

Fellow Uralistas Dana (dirtydr) and John (Spat) also showed up in their rigs.  Dana with his 1150GS Tug with California sidecar and John with his white 2008 Ural Patrol.


The ride was a 65 miles loop from the Jefferson County government building area where the ride starts, up CO93 to the Golden Gate Canyon Road, all the way to its junction with CO119 aka the Peak to Peak Highway.  It turns north on this highway to the exit for Coal Creek Canyon Road and back to the start point.
The entire ride was escorted by motor officers from the Jefferson County Sherriff's Office, they were there on their day off and were volunteers in helping support this ride.  My hat is off in their sterling and unselfish performance in keeping the motorcade running smoothly and safely.
James was my passenger, or monkey, again this year and he tells me he liked the Suzuki Rig much better than the Ural sidecar rig. 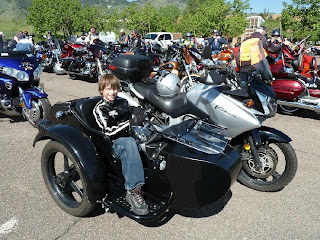 This ride raised over forty one thousand dollars today to help the kids of the Pediatric Brain Tumor Foundation.  Please check out the pbtf site for a ride near you.  They host 40 of these rides year round, surely there's one near you.  If you missed today's ride here in Colorado, I hope to see you there next year! 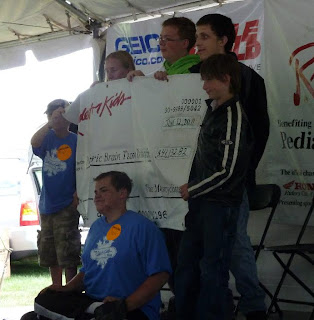 The "check" displaying that day's total contributions by all involved.
Posted by redlegsrides at 8:13 PM

How is James doing? Does he still have treatments?