The Montana Trip - Day 6 "Going to the Sun Highway"

Today, July 13,  was the big day, the opening of the "Going to the Sun Highway" and Logan Pass for the season.  The heavy snows from this past Winter had been so great that it had delayed the opening till today. 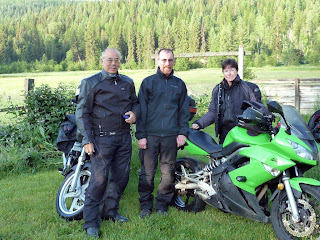 My reminder to bring three riders back with me from Logan Pass
Our plan, guided along by input from a local rider (thanks Dana) would have us going in a counter-clockwise direction starting basically from West Glacier, motoring on US Rd 2 going around the southern end of the Glacier National Park.  We were hoping, and would end up being proven right, that this way we'd avoid the massive crowds trying to get to Logan Pass from the west entrance of the park.

We left promptly at 8:00 AM after another hearty breakfast, the four motorcycles and Martha's Bimmer with her dad Richard, his friend Jon from Norway, and the two boys ensconced in the rear seat deep into their video games on their i-touches.

Martha was riding Monkey at the start of the ride, we made good time towards our first stop which was "Two Medicine" which is located on State Rd 49.  Some construction delays on US2 but nothing major, paid our fee at the park entrance and wound our way to the lake that is the centerpiece of the Two Medicine area.  I am told companies use this location to film commercials and movies involving lake scenery with towering mountains all around. 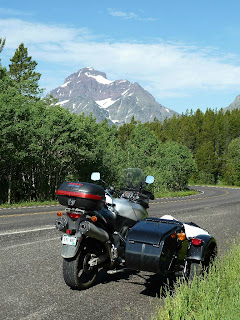 The first view of the mountains
Quite the beautiful setting, you can take a boat trip around the lake but we chose just to take some pictures. 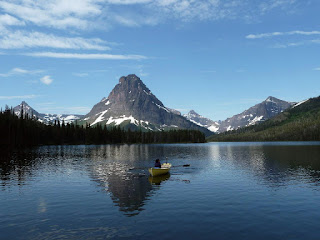 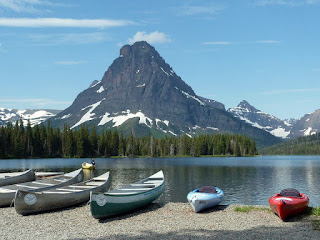 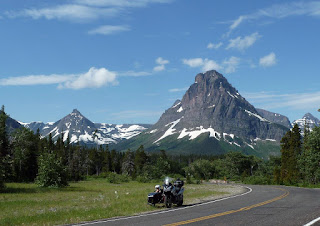 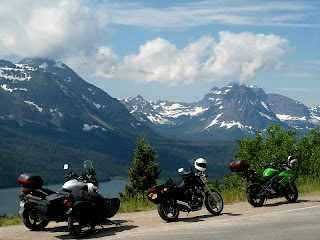 Back on northbound State Rd 49, an overview look of Two Medicine area 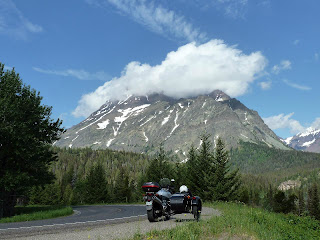 Another view as we exited Two Medicine
Then we rode north on US89, which eventually gets you to the town of Saint Mary and the eastern entrance to the Glacier National Park.  We gassed up here, regrouped with the car and we made plans to go into the park and stop at the Rising Sun Picnic area for a late lunch. 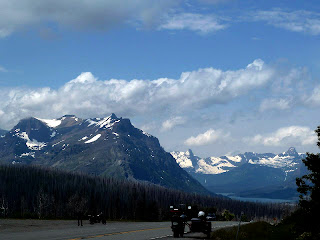 The view as you approach Saint Mary from the south
After lunch, Richard and Jan along with Martha and Miles took off ahead of us and we proceeded on towards Logan Pass which at this point was less than 17 miles from where we had lunch.

Though there were not as many spots to stop on the eastern side of the park as I would have liked to have found existing, there were enough to get some shots of the magnificent mountain scenery in this part of the park. 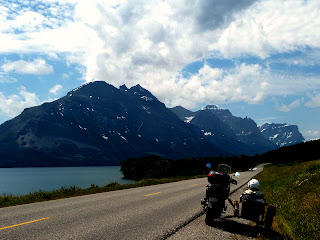 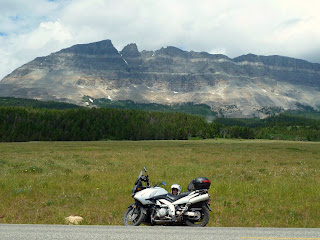 Near the Rising Sun Rest Area
As we got nearer and nearer to Logan Pass itself, the amount of cars grew in number, especially the ones coming from the western end of the park!  There was rumored to be no room at the summit parking lot and we elected to bypass it.  There was really no safe place to stop the motorcycles either before or after Logan Pass.  However, the sheer number of cars and the multiple road work projects proved favorable in causing such long delays at times that we had plenty of time to take pictures.


The trick of course, was ending up being stopped by construction where there was scenic traffic!  Still, we managed a bit. 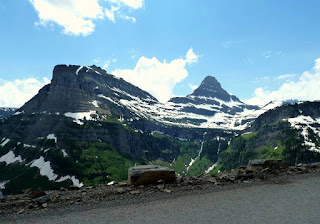 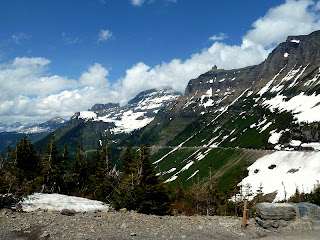 You can just see the long line of cars along the road, waiting for their turn
on the narrow mountain side roads under construction 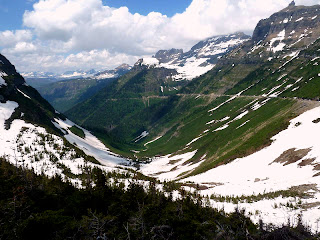 one of the highlights of the ride, besides the magnificent mountains, was the visit by a mountain goat and its kid.  We were again stuck waiting on construction and this little fellow wandered over right next to the car in front of where I was stopped.  Momma goat was overwatching it from a bit higher up the side of the road of course, but the kid really was not afraid of the hordes of people who gathered to take pictures of it. 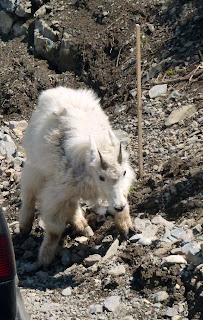 Kid
Things eventually smoothed out in terms of constructions and traffic jams and we made it past "the loop" where we stopped to take a breather from the hot weather. 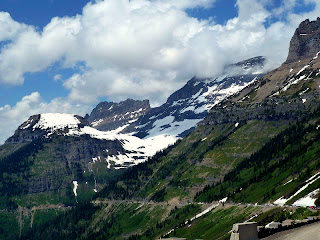 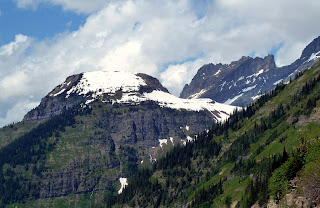 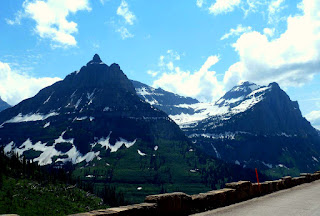 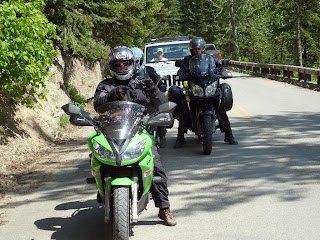 Here's Bluekat, her husband Ron directly behind her and Bobskoot
Ron, Bluekat's husband, left us at this point to boogey on down to the town of Kalispell to try and get a new rear tire as the threads were at or below the TWI: Thread Wear Indicator.  He, Bluekat and Bobskoot had hundreds more miles of riding to do before getting back home to Oregon!

We continued riding for a bit, and while there was some scenery remaining, spots to safely stop remained scarce where the light was right for pictures.  We rode on to the town of West Glacier, exiting the park and making our way to our cabin in Martin city.  I am happy to report Ron got to the Leland Honda dealer in Kalispell in time and they squared him away with a new tire for his motorcycle.

He got back at 7:00 PM, just in time for dinner.  A good day of riding, in spite of all the construction to/from and within the Glacier National park.  One note though, if you're planning a ride to the Ride to the sun Highway, don't go on opening day, the crowds are too large and annoying!

Only 160 miles today, but quite twisty and scenic.  I will update this posting with some short movies once I process them.
Posted by redlegsrides at 8:37 PM

Wow, what a place Glacier national Park is. I didn't go there on my tour of the USA, but after seeing your pictures, I think I am going to have to go there to see it for myself. Great pictures as usual Dom.

Stunning scenery indeed. I am glad for you guys that the pass is finally open, but the cager crowd must have been quite annoying.
Enjoy the rest of your stay, and continued safe riding!.
Lucky me (not), instead of a full weeks off I have been granted one (full) day... so it will at least be a prolonged weekend.

What a view! Thanks for sharing it with us.

We were expecting to see a deeper snowpack given that we had heard they just finished plowing earlier this week. It must be warm, even at the higher elevations, that it is all melting very quickly.

Glad to hear you all are enjoying your trip.

Happy motoring to you and your posse.

Beautiful scenery and great company on two wheels. You can't ask for more than that.

Well you could ask for less traffic and road construction but no one will listen.

This is the kind of ride report that lifts a biker's soul. The pictures are utterly incredible... I only regret the was no dialogue to go with the pictures. You must be having a great time cruising around with BlueKat, her husband, and Bob Leong.

The best part of these past two episodes is that there were no gratuitous shots of Bob's pink crocs. (I know you will never own a pair of these! LOL) It must be terrific having your wife in the sidecar.

When do you plan on being back in Colorado?

You will be missed at the Beemer Rally, but next year's event will be held in Missouri, about six states closer to Colorado. See you then?

SonjaM-thanks for the kind words and yes, the cagers were quite annoying.

Andy and Laura, thanks also for the kind words...

Trobairitz, no, you really can't ask for more...can you? But since you mentioned it, more time to do such things would be nice.

Jack, thanks for the great comments. I am back in Colorado after a rather ignominous end near Idaho Springs. More on that later.
As to the next rally being in MO, maybe, still not a rally kind of guy. How did your presentation go?

Great write up, pics, and video. Going to the Sun Highway has been a dream ride since I first heard the name...hopefully I'll get a chance to follow your route one day!

Ironhand Cycles, thanks for commenting and reading this stuff.

For all others, added video of riding on the Going to the Sun Highway.....enjoy!